Advertisement
The Newspaper for the Future of Miami
Connect with us:
Front Page » Communities » Rail station’s impact may alter neighborhood 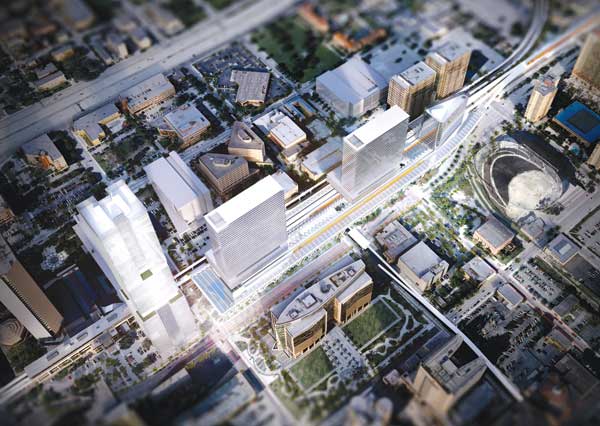 Plans for a 9-acre train station with accompanying residential, retail and office space in downtown Miami might have a ripple effect of sorts on the rest of the neighborhood.

All Aboard Florida, a subsidiary of Coral Gables-based Florida East Coast Industries, plans to run a passenger train between Miami and Orlando with stops in Fort Lauderdale and West Palm Beach.

MiamiCentral, as the future downtown Miami station is called, might prompt a rise in future office, retail and residential property uses near the station site.

Miami Today asked local industry experts whether they think MiamiCentral would prompt adjacent development and property use changes in downtown.

The short answer was ‘yes.’

Indeed, several land purchase deals in and near downtown have closed in the past couple of months, Ms. Blanca said.

“Those buyers may be speculating and some may be ready to start development,” Ms. Blanca said.

Miami Worldcenter, a multi-block development that’s to include retail and residential space, is to rise across the street from MiamiCentral.

If leasing activity at MiamiCentral and Miami Worldcenter is any indication of increased interest in the area, then it would be fair to say that more and more tenants want to set up their operation in the area.

Blanca Commercial is negotiating with several future tenants and is to sign the deals within two months, Ms. Blanca said. She didn’t want to disclose names of the tenants who are expected to set up offices at MiamiCentral.

“We are taking a number of calls from office developers that are very interested in developing office space in our part of the city, closer to public transport, closer to the highway system and close to the arts and culture,” he said.

Together, MiamiCentral and Miami Worldcenter are in a way creating a city center.

“And whenever you see that happening, that tends to spur tremendous demand from all sorts of uses, from retail to hotel to office to residential,” he said.

In particular, other local real estate professionals said, a high demand for office space near MiamiCentral is expected.

“I’m hearing interest from my client base for Class A office use,” said Tom Capocefalo, corporate managing director for commercial real estate firm Savills Studley’s Miami office. “Whereas now rather than looking at conventional office building along Brickell and the downtown core, we are being asked by clients, ‘Hey, anything out there closer to the station to be built?’And the reason being, it’s perceived to be the center of the new business activity in general.”

An increased demand for office uses near MiamiCentral is also likely because the passenger line’s connectivity to Fort Lauderdale.

“It would be easier to commute because you could come from Fort Lauderdale and work in downtown Miami,” said Boris Kozolchyk, director of retail services at real estate firm PointeGroup.

When it comes to the retail demand, Mr. Kozolchyk added, future tenants and developers would probably first have to wait and see what kind of retail the train station and Miami Worldcenter would bring. Macy’s and Bloomingdale’s are to open retail stores part of Miami Worldcenter.

The two large developments coming to downtown might also serve as catalysts for more development to both markets in the area – the market in the east and the market to the west of All Aboard’s station.

“If you look at west of the [Miami] River, there is no major retail hub. So if the parking is convenient and access is convenient, you have a reasonable amount of population that’s looking not for the city center, but it’s looking more middle of the road and more convenience. More, perhaps, the Target level and Walmart, and neighborhood stores,” Mr. Kozolchyk said. “There are a number of services that could be attached to that market.”