Advertisement
The Newspaper for the Future of Miami
Connect with us:
Front Page » Government » City rejection, but Worldcenter rolls ahead

City rejection, but Worldcenter rolls ahead 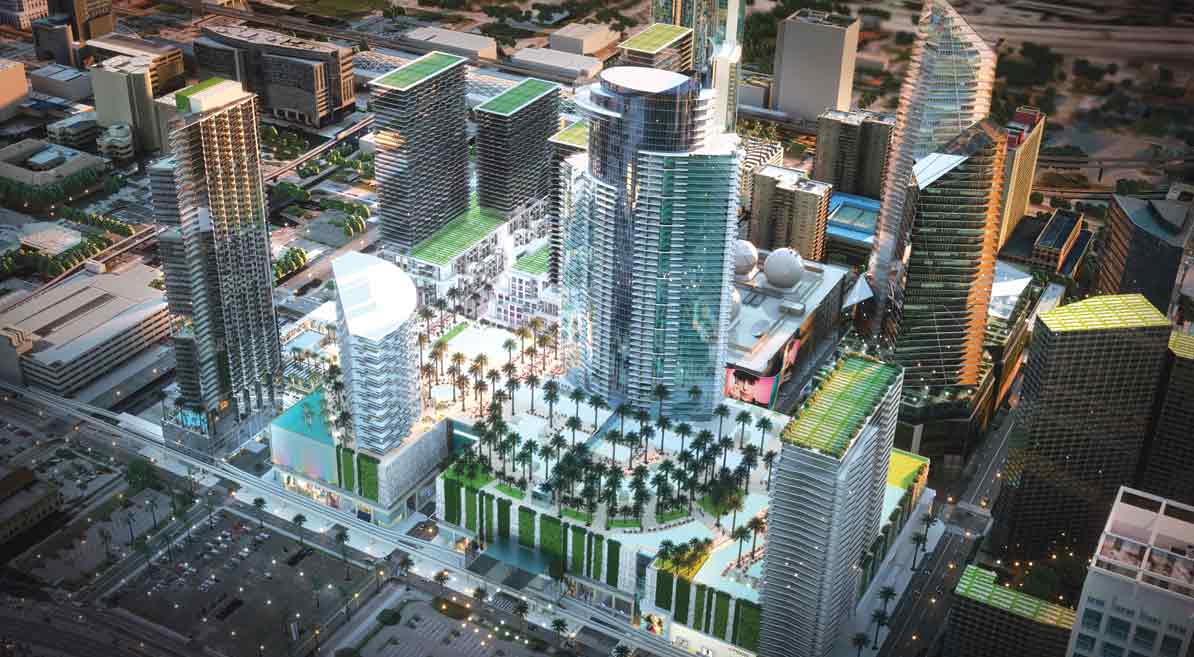 Developers and designers of Miami Worldcenter met sharp criticism Dec. 17 from the city’s Urban Development Review Board, which then rejected the design – a move likely to hasten rather than derail the project.

Board Chairman Robert Behar repeatedly referred to the massive design of the mega mixed-use project as a “monumental mistake.”

Board member Anthony Tzamtzis might have had the most severe dig: “The design is destructive to the urban grid of Miami.”

“We can deny the project,” said Mr. Behar. “It’s not appropriate, conceptually, with the urban grid of Miami.”

After several motions were made but not supported, and after deferral was mentioned, the developer’s own attorney asked for a blanket design denial so the project can move on.

The board members  – all architects – recommended denial of the phase one design. The board’s action is advisory only, simply a recommendation to the city’s planning director.

Attorney Ryan Baline asked for the denial so as not to delay the project. Developers recently announced plans to begin construction on phase one in the first quarter of 2015, with the goal of going vertical by mid-year.

Worldcenter is a collaboration of master developer Miami Worldcenter Associates and a team of development, design and engineering firms. The Forbes Co. and Taubman are building a 765,000-square-foot shopping mall anchored by Bloomingdale’s and Macy’s.

The entire development promises to bring a mix of residential towers, hotels, retail stores, restaurants, entertainment venues and a convention center to an area hugged by American
Airlines Arena and All Aboard Florida’s planned MiamiCentral train station.

Representatives of the developer presented the review board with many renderings of the first phase of the project.

Mr. Baline outlined some history of the Worldcenter plan, and how city commissioners approved a revised Special Area Plan earlier this year.

Of the overall 27 acres, phase one will consist of about 11.5 acres and include about 4.4 million square feet of development, Mr. Baline said.

This phase includes the large retail center – sometimes referred to as the Mall at Miami Worldcenter – one condo tower called Paramount, and one smaller apartment tower.

At that point, Mr. Baline turned over the presentation to Michael Cohen, architect with Boston-based Elkus Manfredi Architects.

“Our design is fairly advanced,” he said. “We’re almost ready to put a shovel in the ground.”

“This urban project delivers what very few projects in Miami do,” said Mr. Cohen. Typically, this amount of development would become reality in stages over 15 or 20 years, he said, but this project now proposes mixed-uses in one or two phases.

Mr. Cohen mentioned the unique location of the site, from Northeast 11th to Sixth streets, and its close proximity to so many key spots like PortMiami, Bayside Marketplace, the Justice Center and the new train station.

He also mentioned the three Metromover stops adjacent to Worldcenter. “It provides linkage to all of those things… to the bay and Overtown, too,” said Mr. Cohen.

He praised the benefits of the tunnel to PortMiami opening this year, taking thousands of big trucks off downtown streets, which allowed the designers of Worldcenter to make its project more “pedestrian-oriented.”

He also mentioned extra wide sidewalks, 35 to 40 feet, where restaurant uses could spill outside.

A parking facility would rise five levels, with a mix of spaces for public and private use.

All review board members praised the intent of Worldcenter, to revive nearly 10 blocks of mostly empty lots in the Park West neighborhood with an influx of investment and jobs.

Mr. Behar said, overall the project is “fantastic” and the catalyst that is needed to bring life back to that area.

But Mr. Behar continued to have strong feelings about two aspects of the design. He said he has a fundamental issue with its massiveness. “You won’t get my recommendation” because of that, he said.

Mr. Behar said having a massive pedestal for the first phase appeared as more than 1,000 feet of unbroken structure, and too dominating.

Mr. Cohen attempted to point out areas along the several blocks where the large pedestal has setback areas of varying depth, some 40 feet, some 60 feet, back off the sidewalks.

Mr. Behar was also critical of how much construction is planned for the area above a planned bridge to take pedestrians over Eighth Street.

Lobbying for a recommendation of approval, Mr. Baline told board members of the community outreach accomplished by the developers and a number of community meetings held in the area and adjacent neighborhoods, where they gained support for the project.

Mr. Tzamtzis said the project has historical significance for the city and he supports the project in concept.

But he spoke of the shadow created by gigantic buildings, and equated the design to “a box covering four city blocks.”

“I feel like an idiot sitting here criticizing this… magnitude. I feel very strange about this. It should have been presented at different levels,” he said.

Mr. Behar again referred to the large pedestal that would be the foundation of phase one, calculating its size as a wall 1,225 feet long and 150 feet high.

“It would be a monumental mistake to have that massiveness and no break,” he said.

And Mr. Behar again was critical of the plan for uses above Eighth Street.

Mr. Cohen said a lot of work went into the design and “there are so many things at work here,” showing floor plans, garage entrances and more.

As the meeting dragged on, Mr. Hall said his time was limited and he’d have to leave soon, and he worried about losing quorum.

“I don’t have the same strong objections voice by my colleagues,” Mr. Hall said. “We should have a lot more debate on it, but I like what I see…” The project, he said, will rejuvenate the area and “bring back to life what was the heart of Miami.”

For the developers to get this project off the ground is “a major achievement,” he said. “It’s taken a lot of planning to get where you are.”