Advertisement
The Newspaper for the Future of Miami
Connect with us:
Front Page » Communities » 77-story downtown tower advances 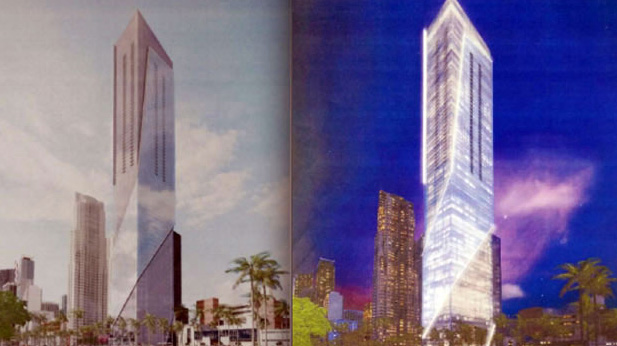 The Holiday Inn downtown is checking out to make way for a 77-story mixed-use tower on the prime real estate along Biscayne Boulevard.

The skyscraper will rise across from Bayside Marketplace, be adjacent to Bayfront Park and sit three blocks from AmericanAirlines Arena. The Holiday Inn at 340 Biscayne Blvd. would be razed to make way for the tower.

The project won conditional approval Dec. 17 from the city’s Urban Development Review Board, with members seeking more exterior detail of such a major development.

The tower is allowed under the site’s zoning, said attorney Iris Escarra, representing the developer.

It’s the size of the as-yet-unnamed tower that triggered a requirement to have the board review it, she said. The board must review developments of 200,000 or more square feet.

“It has 77 stories and a lot of components,” said Sherri Gutierrez, vice president of architectural firm Arquitectonica, which designed the tower.

As if describing the ingredients of a multi-layered cake, Ms. Gutierrez explained the proposed uses from the ground up using a large color-coded rendering.

The design employs three types of glass – black, reflective and clear – and has a secondary outer façade hugging or spiraling around the main structure.

The three review board members, all architects, were left wanting more.

Member Neil Hall said he has a lot of respect for Arquitectonica but was “quite surprised and shocked” by the presentation for the tower.

As a board they see many projects of varying sizes with the exterior treatments “thoroughly worked out,” helping the board judge how a project will fit in with the growing urban skyline, he said.

“But I am not feeling this [building],” Mr. Hall said.

The renderings show a slick form, but the presentation offered too much information on interior floor plans and not enough on exterior design, he said.

“A project of this type deserves a better presentation,” agreed member Anthony Tzamtzis.

Mr. Tzamtzis said what was presented was incomplete and hard to understand, especially given the size, dominance and location. He called the tower massive and said he wanted more details.

“I sort of agree,” said board Chairman Robert Behar.

It is a beautiful building, he said, but how will such a great presence fit into the urban environment?

“We deserve a better presentation. What’s going on at the street level?” Mr. Behar asked.

The board voted 2-1 to recommend denial of the project. Then members reconsidered and unanimously recommended approval on condition the developer provide more detail of the exterior façade. The board is advisory only and makes recommendations to the planning director.

Ms. Escarra said the developer’s next step is to get building permits, after final review by the planning director. The project doesn’t need city commission action.