Advertisement
The Newspaper for the Future of Miami
Connect with us:
Front Page » Filming » Miami’s own film studio work advances 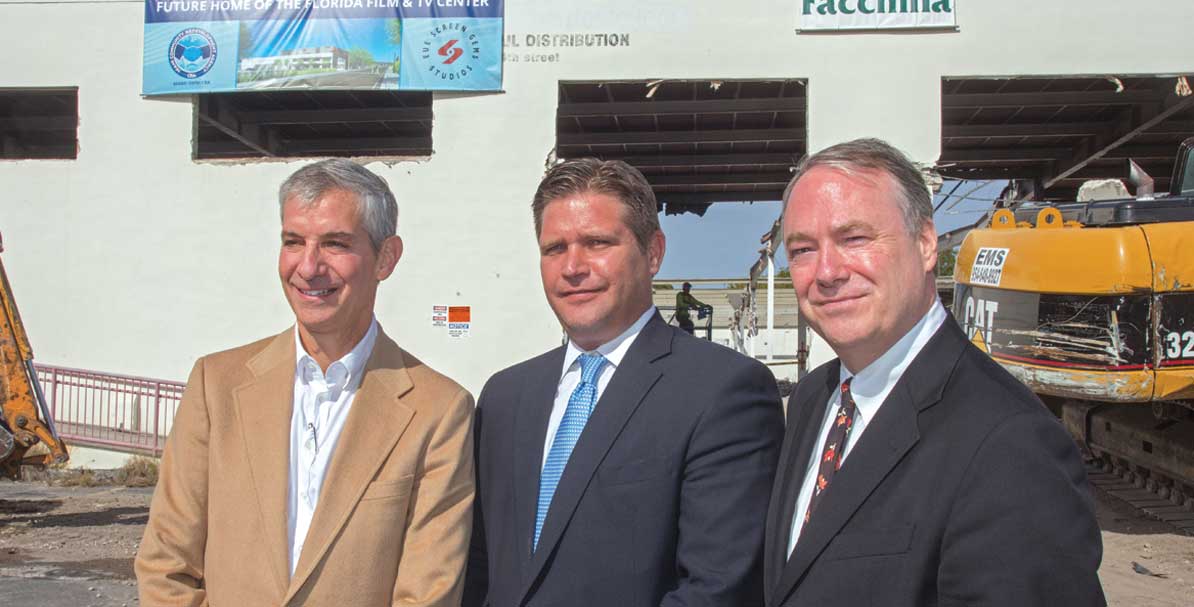 Minus one wall and bearing a new name, the Omni Community Redevelopment Agency’s planned film studio 50 NW 14th St. continues to move forward. The Florida Film & Television Center, formerly called the Miami Entertainment Center, is under construction in a building that the agency bought in 2011 for $3.1 million.

“The name change reflects the film and television industry’s significance in the state of Florida,” said Pieter Bockweg, agency executive director. “Although the studio is based in Miami, it will function as a centralized hub for productions that spread out across the state.”

Completion of the studio, which will house two sound stages of 15,000 square feet and about 12,000 square feet of office and storage space, along with editing suites, is expected in summer 2015.

The wall was eliminated Friday to make room for construction cranes, which are lifting pre-fabricated walls into place to support the roof. Raising the roof to a height of 50 feet is considered a crucial production requirement and key to renovation plans.

Work on the interior began last month; groundbreaking was to have taken place in August but was delayed until mid-October.

In March, agency directors signed a lease with EUE/Screen Gems Studios to build out the facility and operate it. The company, based in New York City, operates film studios in Atlanta and in Wilmington, NC.

“This will become, I think, the best in class in a short amount of time,” said Chris Cooney, EUE/Screen Gems chief operating officer, last week. “We recognize we are in an area of superb learning institutions and we want to have great dialogue with schools. Today they are students, but tomorrow they will be producers and storytellers, in this industry, hopefully working here.

“We’re also proud to be a new member of this area. We see the change going on and it’s very exciting,” Mr. Cooney continued.

“Miami and South Florida offer tremendous crews, a great population of content and idea people.  But what was missing was a facility that would handle the big ideas,” he said.

EUE/Screen Gems Studios leased the building for 10 years with an option to renew for nine more, and is to pay $100,000 per year and 11% of gross sales in excess of $750,000 once it’s up and running. The agency will reimburse EUE/Screen Gems up to $11.5 million in development costs.

EUE/Screen Gems’ Wilmington studio is the largest production studio in the US east of California, with 10 sound stages comprising more than 150,000 square feet, according to a redevelopment agency release. Since 1985, more than 350 film, television and commercial projects have been shot there. The Atlanta studio complex contains 10 stages in 138,000 square feet of production and flex space. It has hosted more than 20 scripted television shows and feature films since it opened in 2010.