Advertisement
The Newspaper for the Future of Miami
Connect with us:
Front Page » Transportation » Downtown rail link would cost $68 million 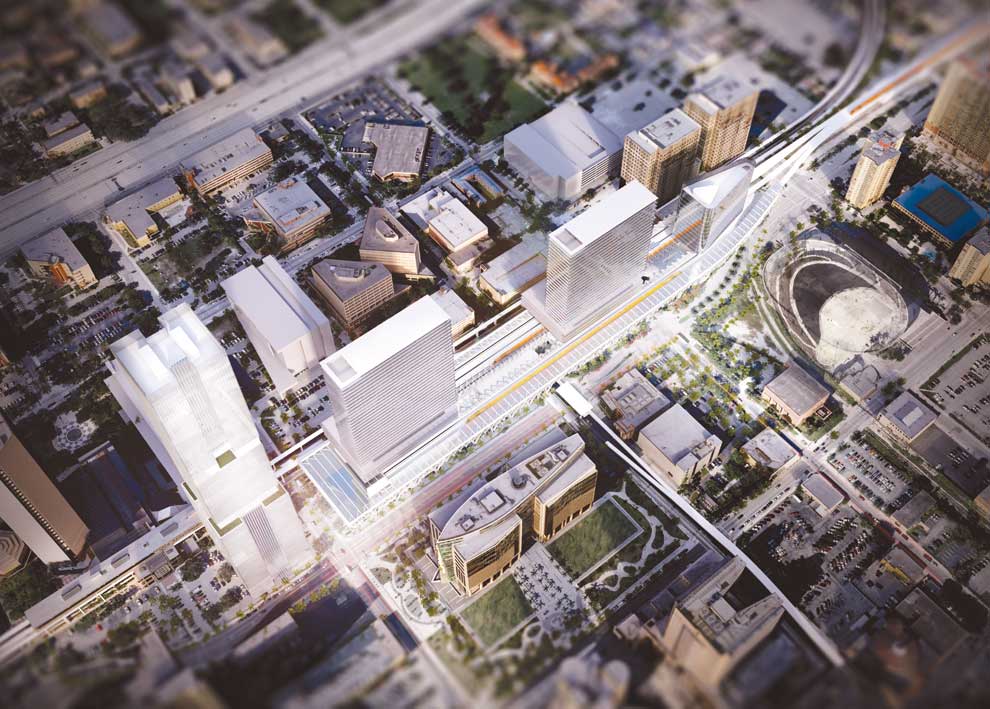 For an existing passenger train to eventually link to downtown Miami, $68 million in public funding is needed.

For years, South Florida transit agencies have wanted Tri-Rail, which now connects the western parts of Miami-Dade and Palm Beach counties, to begin running in the eastern parts of the tri-county area.

The plan is for Tri-Rail’s southernmost stop to be in downtown Miami at a soon-to-exist station that a private firm is already building.

All Aboard Florida, a subsidiary of Coral Gables-based Florida East Coast Industries, is building the downtown station where its own Miami-Orlando express passenger trains are to stop.

But if Tri-Rail trains are to pull into All Aboard’s station, the public would have to pay for the infrastructure Tri-Rail would need.

Backers of a Tri-Rail expansion say this is a one-time opportunity to have the trains pull into downtown Miami – once All Aboard’s station is built, it can’t add infrastructure to accommodate Tri-Rail.

Since All Aboard Florida is ready to roll – parking lots where the station is to rise have been cordoned off – that leaves little time to find the $68 million.

“If we can figure out some way of coming up with those dollars, then All Aboard Florida has suggested that they can move forward now, built it in there and then we will get that repaid to All Aboard Florida later,” Mr. Stephens said.

A possible funding source is the area’s community redevelopment agency, “if they provide a portion of the increased tax revenues that All Aboard Florida is bringing back to us and then we would reimburse All Aboard Florida,” Mr. Stephens said.

The $68 million is far less than what the public funding would have to be if All Aboard Florida weren’t laying the foundation, backers of Tri-Rail expansion say.

“We have that 2004 study that analyzed all the rail convertibility. With existing right-of-way and tracks already there or to be added by the private sector, that’s very low on capital costs,” said Miami-Dade Commissioner Xavier Suarez.

Tri-Rail expansion into the eastern parts of the tri-county is a long way off. But there’s an opportunity for Tri-Rail to begin running in east Miami-Dade by 2016.

A track upgrade by the state transportation department would allow Tri-Rail trains running on CSX tracks in Miami-Dade to transfer to FEC tracks at Northwest 71st Street.

“This can give a one-seat ride to downtown Miami for users coming as far north as Palm Beach County,” Mr. Stephens said.

Then again, that connection hinges on the $68 million in public funds still needed for Tri-Rail infrastructure at All Aboard’s downtown station.

“I’m pushing everybody that we need to do this. If we don’t do it now, that connection to downtown Miami would be forever precluded,” Mr. Stephens said. “I think we would regret it long-term if we missed it.”