Advertisement
The Newspaper for the Future of Miami
Connect with us:
Front Page » Top Stories » Miami’s slice of the Berlin wall

Miami’s slice of the Berlin wall 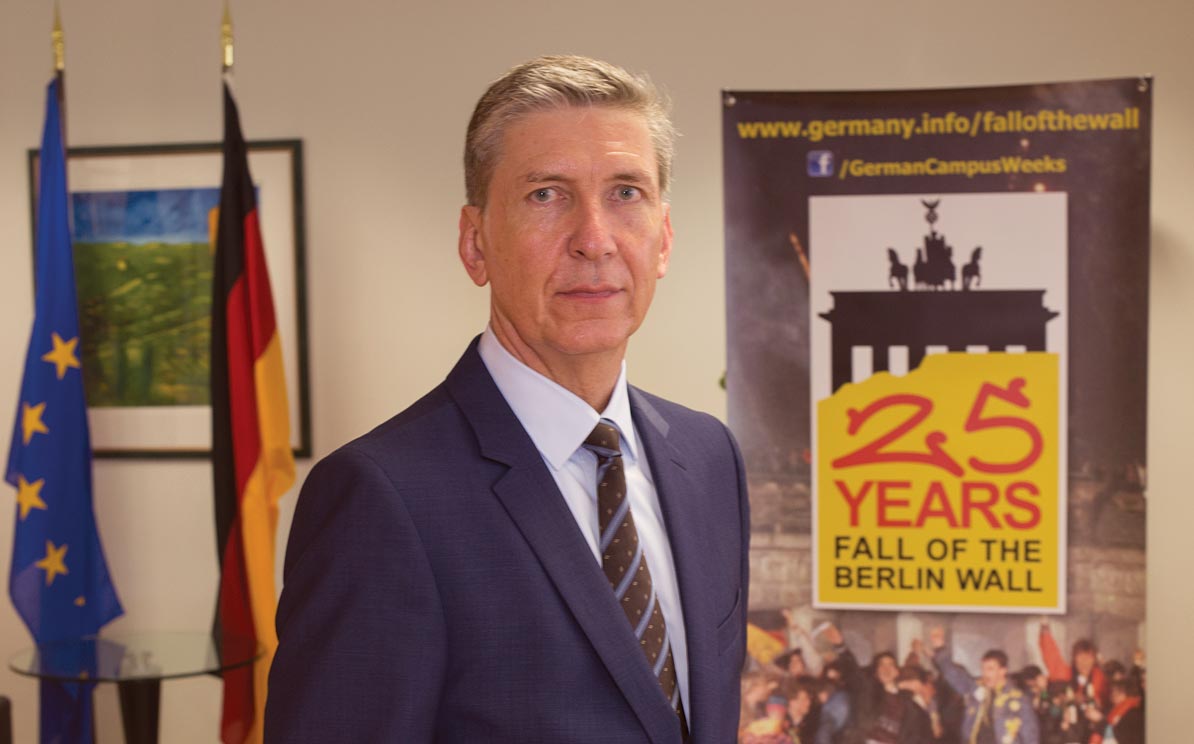 The fall of the Berlin Wall 25 years ago and subsequent reunification of Germany sent a message of peaceful reconciliation and hope throughout the world. This weekend, the German Consulate will host an open-air anniversary celebration of that event, in collaboration with Miami Dade College and Miami Mayor Tomás Regalado. The celebration will begin at 1:30 p.m. Nov. 9 at Kyriakides Plaza, Miami Dade College’s Wolfson Campus, 300 NE Second Ave.

During the celebration, Consul General Jürgen Borsch, Germany’s representative to Florida, Puerto Rico and the US Virgin Islands, will unveil an authentic segment of the Berlin Wall and present it to the City of Miami. A Berlin Wall exhibition will also be featured, and the first 600 guests will receive a complimentary t-shirt to wear to help form a human German flag.

The wall segment, nearly 10 feet high, “will be displayed at the main entrance of Miami Dade College,” Mr. Borsch said, “where thousands of students will pass it every morning. It will be a symbol that change and reconciliation are possible without one drop of blood shed. We want to send a political message that people can find peaceful solutions if they want to.”

He said the presentation of this piece of history is a way of saying thank you to the US for its support of the German people over the past 70 years, beginning with the Allied Normandy Invasion, which freed not only Germany but much of Europe from the Nazi yoke.

“People are grateful to this day,” he said. “It was the beginning of a long friendship.”

That bond was strengthened by the Berlin Airlift of 1948-’49, Mr. Borsch said, when US airmen flew in food and basic necessities to nearly 2 million Berliners for 15 months.

“It brought in the idea of peace and democracy,” he said, “and gave children the message that freedom has a taste  the taste of chocolate and peppermint chewing gum.”

The Berlin Wall, built in 1961 by the Soviet-controlled German Democratic Republic in East Germany to keep East Berliners from defecting to the West and guarded by soldiers with shoot-to-kill orders, claimed hundreds of victims still remembered in Germany today, Mr. Borsch said.

Two visiting US presidents famously protested its presence  John F. Kennedy, who in 1963 summed up US policy with the words “Ich bin ein Berliner,” and Ronald Reagan, who in 1987 demanded, “Mr. Gorbachev, tear down this wall!”

Nov. 9 is “a fateful day” in German history, Mr. Borsch said. On that date in 1938, the Nazi party commenced anti-Jewish pogroms throughout Germany, an act of aggression known as Kristallnacht, usually translated as “Night of the Broken Glass.”

The German Consulate participated in the 75th memorial of Kristallnacht last year, Mr. Borsch said; this year, he will play a role in the 76th anniversary commemoration, starting at 6 p.m. Nov. 9 at the Holocaust Memorial Miami Beach, 1933-1945 Meridian Ave.

“This year, in a very courageous act, the German consul general has asked for and been given permission to present an award to a Righteous Gentile who helped save the lives of Jews,” said Andrew Hall, chair of the Holocaust Memorial Miami Beach, a committee of the Greater Miami Jewish Federation. “The combination of that, the strong movement against neo-Nazis in Germany and Germany’s warm relationship with Israel, reflects the fact that the Germany that exists in 2014 is not the Germany that existed in 1939.

“The government of Germany continues to deal with the bleak times in its history in a responsible way instead of attempting to sweep it away as an historical non-event. They acknowledge and address the blemishes in their record, and they are making reparations and amends.”