Advertisement
The Newspaper for the Future of Miami
Connect with us:
Front Page » Education » FIU launches Peace Corps Prep program 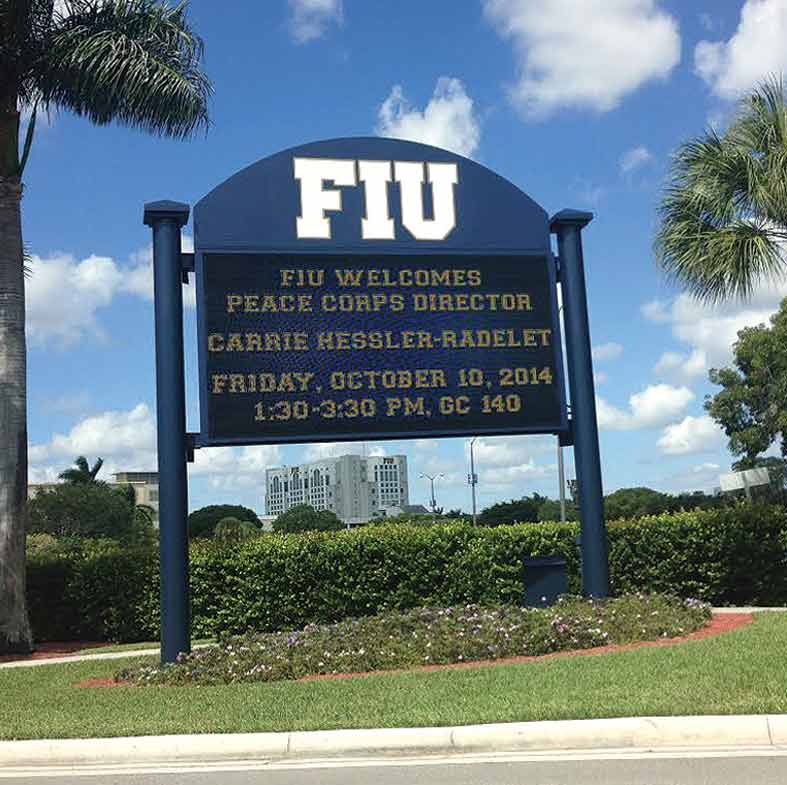 Florida International University is living up to its name. This semester, the university became the first in Florida to launch a Peace Corps Prep program to prepare students for the Peace Corps and other international learning opportunities.

FIU is the largest of the 25 schools that participates in the program. To date, 187 FIU alumni have served in the Peace Corps and 11 FIU alumni are currently serving across the globe.

“From 1992-2002 FIU had an active Peace Corps Fellows program managed by Dr. Robert Farrell in the College of Education,” said Hilary Landorf, Ph.D., an associate professor at FIU and director of the Office of Global Learning Initiatives. The program created a path for returned Peace Corps volunteers to teach in Miami-Dade County Public Schools while getting graduate degrees.

The Peace Corps has long offered a combined master degree and volunteer program at institutions across the country, and FIU has offered that Master’s International since May 1998 through the university’s School of Environment, Arts and Society.

The program is headed by Krish Jayachandran, Ph.D., a microbiology and environmental studies professor at FIU. Through the Master’s International program, accepted students can earn up to six credits for their Peace Corps service and are awarded a master of science degree in environmental studies with a concentration in biological management upon completion, Ms. Landorf said.

To date, about 15 students have graduated from that program.

With the addition this semester of the Peace Corps Prep program, FIU will continue to strengthen its ties with the organization, founded in 1961 by executive order as a diplomatic and international service organization to help establish and strengthen relations between the US and other countries.

Fast forward 53 years to South Florida, when the region’s recruiter Steve Hunsicker met with FIU’s Office of Global Learning Initiatives and the Center for Leadership and Service this year. The university’s new partnership with the Peace Corps was the result.

The program requires FIU students to complete four courses in different disciplines, four semesters of foreign language study and a globally focused community service project. Because the program was already very similar to the office’s Excellence in Global Learning Medallion program, the partnership made sense, Ms. Landorf said. The office applied on behalf of FIU to the corps and was accepted.

“The Peace Corps Prep and Global Learning Medallion programs will help students convey to employers and others the impact of their global experience and preparation at FIU,” Ms. Landorf said. “When these honors are included on resumes … Peace Corps Prep Certificate/Global Learning Medallion holders will distinguish themselves as highly prepared,” she said.

In competitive pools for fellowships and internships, additional certificates make all the difference.

Nearly 80 students had signed up for the Peace Corps Prep program even before its official launch this month. Ms. Landorf originally estimated that 50 students would complete the program by spring 2016, but with such a strong response, that number has doubled. “I would now revise that estimate to a minimum of 100 students who will have in their hands a Peace Corps Prep certificate by 2016,” she said.

The program began this semester. Students can apply any time during their undergraduate experience as long as they have at least one year left as an undergraduate when they enter the program.

To apply, students can sign up online at http://goglobal.fiu.edu/pcp