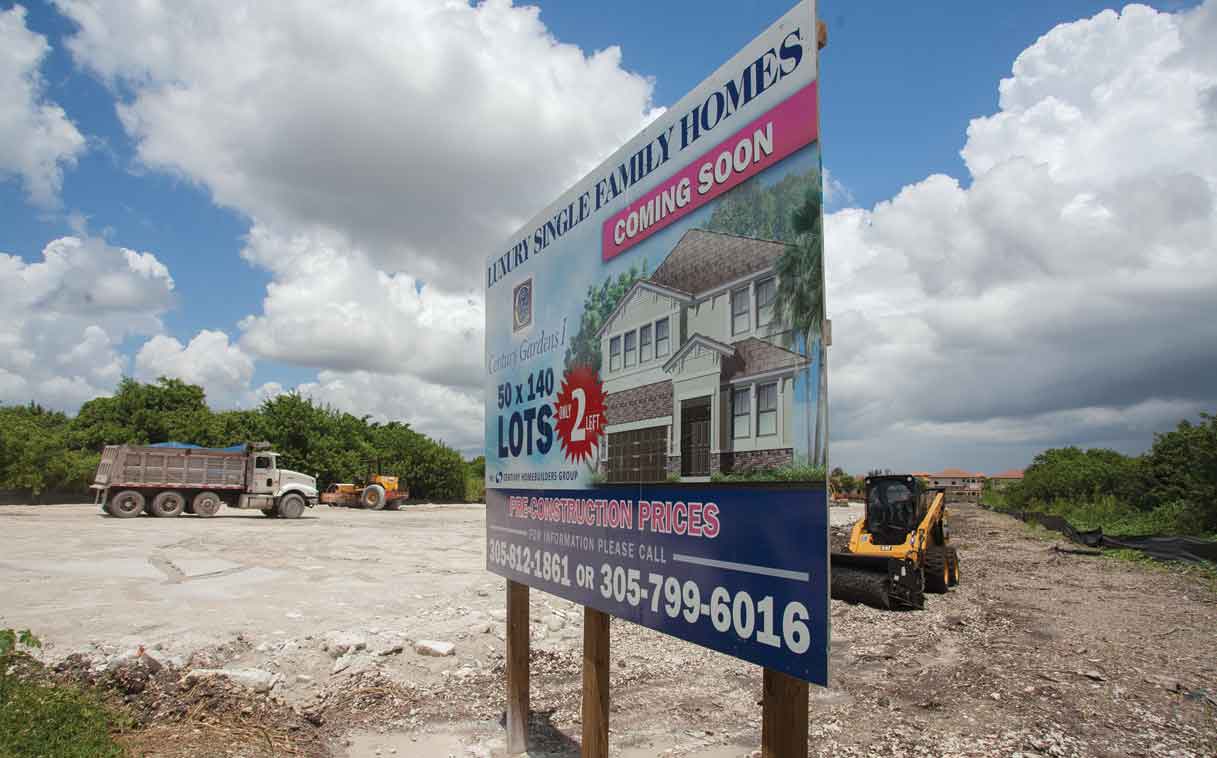 Though condos have dominated the housing market in Miami-Dade since February of 2003, single-family homes are still in demand – but land constraints and escalating costs for what little zoned land remains make it difficult for developers to add new houses.

Restrained by the Atlantic Ocean and the Urban Development Boundary, or UDB, homebuilders “can’t go east and can’t go west,” said Truly Burton, executive vice president and government affairs director of The Builders Associations Chapter of the Florida Atlantic Building Association. “I call it a conundrum.

“Larger builders can hang in there, but most of the smaller ones who were building 50 to 100 affordably priced homes a year are gone – either given up, retired, foreclosed upon or fighting with their banks.”

According to a report from Metrostudy, which provides housing market statistics and analytics, Miami-Dade County’s annual housing starts pace was 2,242 in the second quarter, down 8% from the previous quarter and off 7% year over year. However, quarterly starts rebounded 42% from the previous quarter, and closings were up 26% from a year ago. Finished, vacant inventory stood at 2.4 months.

Across South Florida, particularly in Miami-Dade, Broward and Palm Beach counties, he said, “there’s a constrained supply of good lots and good locations, and the pipeline of replacement lots is not keeping up with demand. Lot shortages will be an issue for the next couple of years.”

As a result, Mr. Cobb said, “the big, sweeping 2,000-lot communities are a thing of the past. Even bigger builders are now picking up 10- and 20-acre sites they would have overlooked a few years ago.”

Local builders who have survived years of inactivity say they’ve had to adjust their strategies.

Sergio Pino, president of Century Homebuilders Group, said that with land scarce and the UDB not likely to expand for many years – “It shouldn’t expand without infrastructure there to support growth,” he said – smaller developments are inevitable.

Century is building about 60 single-family homes in Doral, he said, where there continues to be a strong market geared to Venezuelans, and will build another 50 to 60 this year in several smaller sites around the county. For example, Century Gardens I, on 145th Avenue and Coral Way, is comprised of 12 units.

“It’s different for homebuilders than it was before,” Mr. Pino said. “We used to have much more land banked. Now in our inventory we have purchases of one lot, five lots, seven lots. That’s the only way to acquire land except to go to South Dade,” where he said overbuilding is a concern. “But business is coming back, and the market is getting better.”

Century is also active in the condo market. “We broke ground on the first phase of Midtown Doral; we have another five years there,” Mr. Pino said, “and we will be breaking ground on Gables View next year.”

“The recession was a time to sit down and reflect on what we had done and what we should do,” said Oscar Barbara, chairman of Luxcom Builders. “I have done very high-end trophy properties, and I thought, ‘How do I change the game and make something special that will be within everyone’s budgets?’”

“It does complicate things,” Mr. Barbara said, “but I do not have a cookie-cutter mentality. This way, people will be able to have what they deserve.”

Right now, though, there is a shortage of land zoned for single-family-home communities, he said. “We struggle with it. Not everybody wants to live in a condo. So there is demand. It’s a matter of politicians understanding there is a need and looking at development outside the UDB. But it needs to be responsible development.”

“Land to build single-family homes is becoming a hot commodity,” said Fernando Martinez, president of Caribe Homes. “There’s not a whole lot left that is zoned. I believe that’s part of reason for continued increases in price for this land.”

He said Caribe is currently building on its last parcel, in Homestead, “where it is still possible to find land at a reasonable price to build affordable homes.”

Homes in Caribe’s Leeward Isles, a 60-unit enclave within Lennar’s Isles of Oasis in Homestead, start at $195,000.

“Land prices over the past year and a half have more than doubled,” Mr. Martinez said, “and that creates some concern, because it’s getting to a point where it is going to price small, private homebuilders like us out of the market.”

“The UDB was never meant to be a Maginot Line,” Ms. Burton said. One solution, she suggested, would be a “judicious expansion” for residential development, with the county in charge of planning the future of the area, putting in its portion of infrastructure and also assisting with transportation, hospitals and schools.