Advertisement
The Newspaper for the Future of Miami
Connect with us:
Front Page » Government » Arsht Center seeks playhouse deal intermission 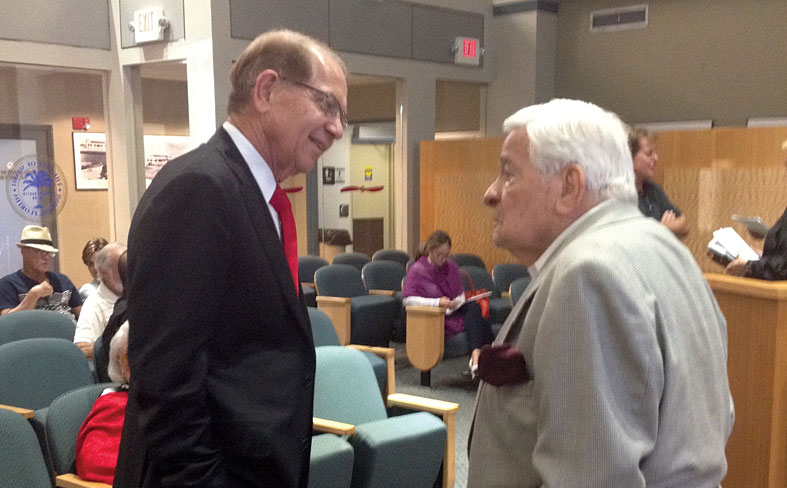 Arsht Trust Chairman Mike Eidson wants Miami-Dade County to stop its process of choosing an architectural firm to design a renovated Coconut Grove Playhouse and wait until the end of September, when he expects the Adrienne Arsht Center will have a final report detailing an alternative plan for the historic theater.

Mr. Eidson spoke for the first time publicly about the center’s proposal for the playhouse at a meeting hosted by the Coconut Grove Village Council on Friday evening. About 40 people gathered in Miami City Hall for his presentation.

He said it’s worth waiting for the complete feasibility study, which a group of leaders incorporated as the Coconut Grove Theater Foundation Inc. will provide for Mayor Carlos Gimenez with details on raising $25 million – augmenting $20 million the county has already reserved for a new theater – to tear down the existing building and rebuild the façade, have two theaters (one with 300 seats and the other holding up to 900 people) and a multi-story parking garage.

Mr. Eidson said the Arsht would operate the theater and raise the $25 million over a period of about three years from individuals, foundations and corporations.

“Our vision is to create a great theater on this property with a company that produces national quality theater,” he said. “The Coconut Grove Playhouse, built in 1926, once had some of the most exciting theater in the country and we can do that again.”

Mr. Eidson, an attorney who is president of the Coconut Grove Theater Foundation, said Miami is the only large city in the US that doesn’t have a flagship theater. He said he and other members of the foundation have been visiting regional theaters across the nation and can attest that “theater is alive and well.”

The former Coconut Grove Playhouse on Main Highway, which once seated 1,500 persons, was closed eight years ago when its board ran into financial difficulties. It has been vacant since.

A number of people who attended the meeting pointed out that the county is currently looking to choose architectural and consultant firms to develop recommendations for what can be built on the site. Mr. Eidson said it’s definitely worth the county’s while to stop its process for a few weeks and wait to see the foundation’s final study.

Others voiced apprehension about the historic building being totally razed, but Mr. Eidson said it’s the purpose that has to be restored and not necessarily the actual building.

“Inside, there are some components that engineers are going to say will have to be taken down,” Mr. Eidson said. “It’s dangerous to keep it. It would not be economically feasible. It cannot be preserved, and the only way is to build it over.”

Ron Nelson, chief of staff for Miami city Commissioner Marc Sarnoff, pointed out that the facility was a movie theater and does not have wings or other aspects a modern theater needs to operate efficiently. Even if the box frame of the facility was maintained, he said, interior aspects would have to be added.

A few people who attended voiced support for Mr. Eidson’s work with the newly-formed foundation.

Jerome Cohen, who described himself as a patron of the arts for the past 30 years, said he has never seen anyone with more purpose than Mike Eidson.

“I must endorse him in this effort,” Mr. Cohen said. “This is not in conflict with what’s happening.”