Advertisement
The Newspaper for the Future of Miami
Connect with us:
Front Page » Business & Finance » Home insurers’ premium margin expands 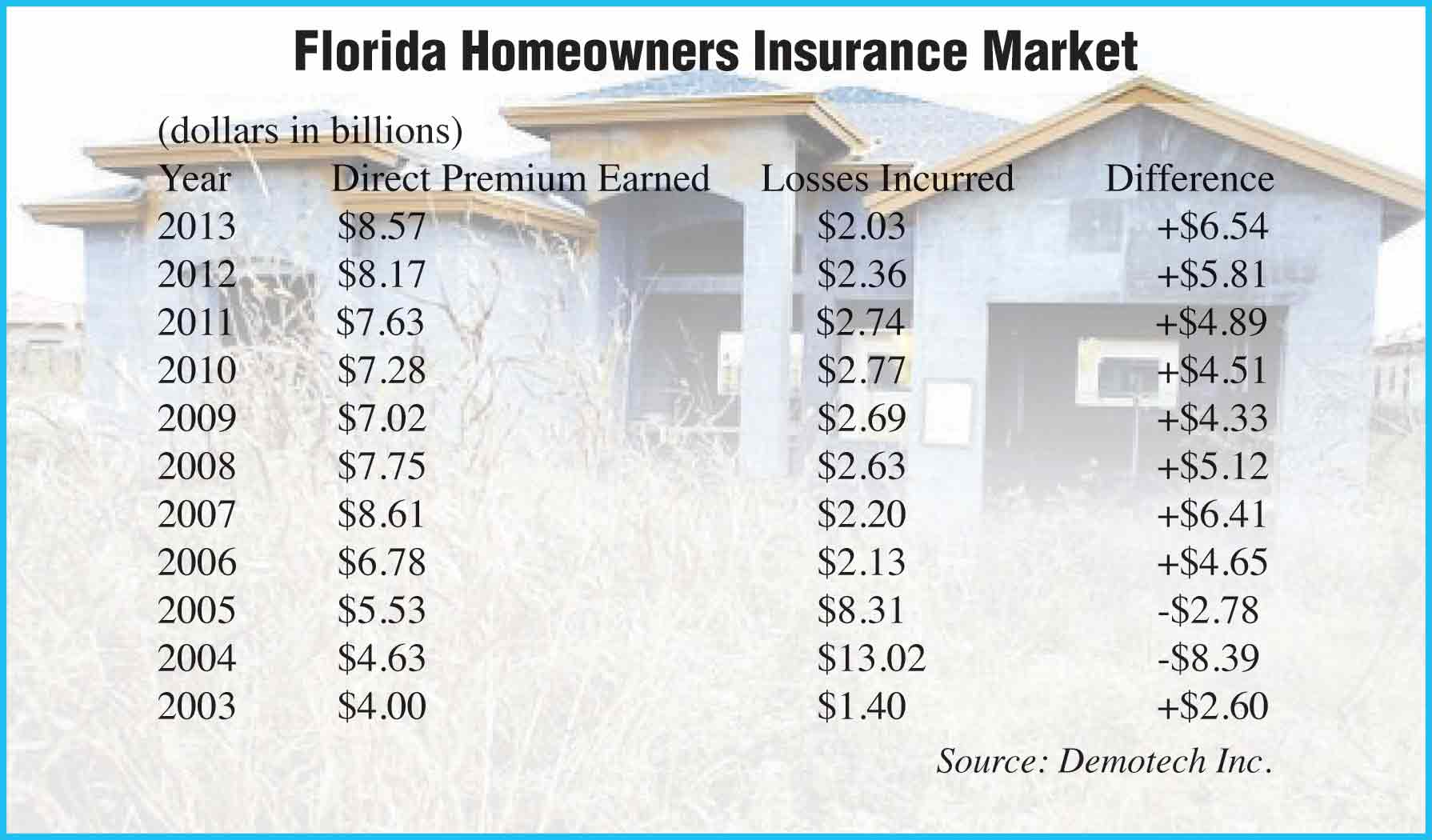 Last year, Florida homeowners insurance companies took in more than $8.5 billion from policy premiums while paying out $2.3 billion in losses and other expenses, for a net difference of $6.2 billion, a new financial analysis shows.

That would seem to be the industry’s most lucrative year in Florida since at least 1995, according to figures in the Demotech Inc. report.

However, the analysis doesn’t include a major expense to insurers – the increased cost of purchasing reinsurance, said Joseph Petrelli, president of Demotech, a Dublin, Ohio-based firm that provides financial stability ratings for the insurance industry.

“The insurance carriers providing residential property insurance coverage to Floridians are purchasing more reinsurance protection than ever before,” Mr. Petrelli wrote in a cover letter to the report.

“Second,” he wrote, “the carriers reviewed and rated by Demotech should be commended, not condemned, for being Demotech rated and meeting or exceeding our reinsurance requirements and other financial analysis criteria.”

Demotech, he said, has “stepped up to be the solution to a crisis” when Hurricane Andrew struck South Florida in 1992, resulting in the liquidation of dozens of insurance carriers countrywide, 21 of which were “domiciled” in Florida.

“We do not ask to be thanked,” he added. “We do not deserve to be pilloried.”

Reinsurance provides a way for insurance companies to protect themselves from financial ruin by passing on the risk to other companies. Reinsurance redistributes or diversifies the risk, or the threat associated with the business of issuing policies, by allowing the reinsured to show more assets by reducing its reserve requirements.

The reinsurance industry became more active during the late 1990s and early 2000s because natural disasters and class-action civil litigation resulted in large payouts by insurance companies, some of which become insolvent.

Mr. Petrelli did not have specifics about growing reinsurance costs to Florida’s homeowners insurance industry. However, he said it isn’t possible to strictly gauge the industry’s profitability from just the numbers presented in the report since it doesn’t include reinsurance costs and other expenses, such as payroll.

What the report does show is that the industry in Florida has steadily increased its totals of “direct premium earned,” or revenue recorded from policy premiums, each year from 1995 through 2013, with the exception of two years – 2008 and 2009 – when the economy and housing market bottomed out.

The unusual string of storms was reflected in the industry’s numbers for those years. In 2004, direct premium earned totaled more than $4.63 billion, but losses and other expenses totaled nearly $13.22 billion, for a deficit of $8.59 billion.

The following year, the industry recorded more than $5.53 billion in direct premium earned, but losses and other expenses totaled about $8.45 billion, for a deficit of $2.92 billion.

This year, however, a lot of insurers in Florida have been filing for rate decreases, said Sam Miller, executive vice president of the Florida Insurance Council, a Tallahassee-based trade association that represents the insurance industry.

Explaining the filings for decreases, Mr. Miller said Florida hasn’t been hit by a hurricane in eight or nine years and costs are down for the industry. He noted that the Florida Office of Insurance Regulation permits the industry to make a profit but would take issue if it finds those profits are reaching “excessive” levels.

Meanwhile, the Florida homeowners insurance market is the strongest it has been in 10 years, according to Florida Insurance Commission Kevin McCarty.

“Florida companies, which make up a majority of this market, have built $4.5 billion in surplus, $16 billion in reinsurance capacity, and renewed profitability that has created new competition in the market,” Mr. McCarty wrote in an editorial last month.

“Nor is anyone lax in monitoring these insurance companies as some [news] coverage has suggested,” he wrote. “We have toughened the rules and procedures over the past three years and continue to evaluate our efforts.”

Private insurers in Florida now must have a minimum of $15 million in surplus, up from $5 million previously required.

And last spring, the Florida Legislature provided state regulators with “additional tools” to aid in the ongoing supervision of insurance holding companies. “New solvency standards make fundamental changes in the way insurance companies and their affiliates are supervised by the office,” he wrote.

The Office of Insurance Regulation, he added, “will continue its diligence to ensure that insurance companies licensed to do business in Florida are financially viable, operating within the laws and regulations governing the insurance industry, and offering insurance policy products at fair and adequate rates which do not unfairly discriminate against the buying public.”