Advertisement
The Newspaper for the Future of Miami
Connect with us:
Front Page » Healthcare » Obamacare paradox in Florida 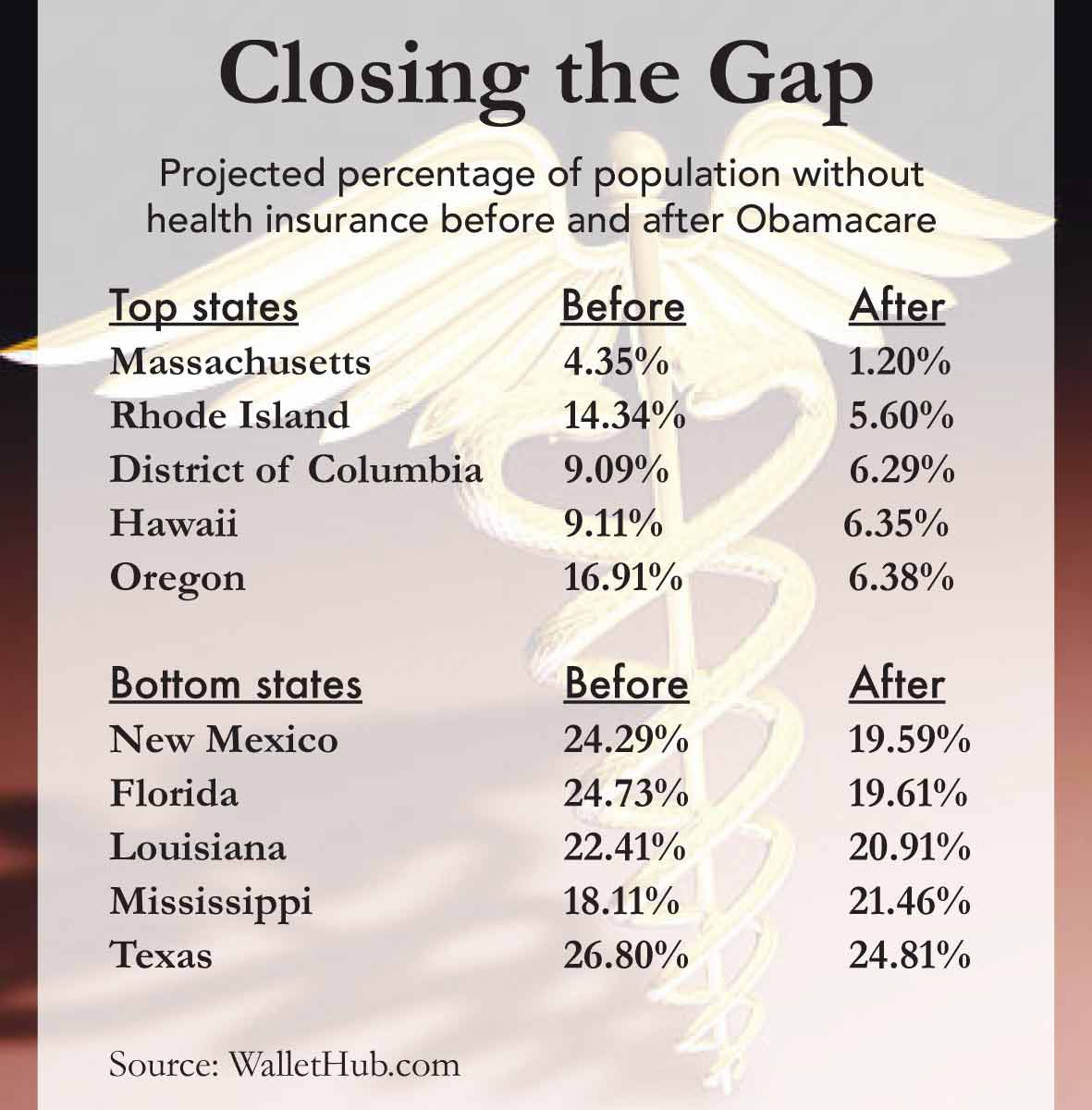 In the first year of “Obamacare,” Florida led the nation in having the most new private health insurance enrollees per capita, yet the Sunshine State still has one of the nation’s highest percentages of uninsured, a new study shows.

Florida ranked first among states with the most net new private insurance enrollees per capita under the Patient Protection and Affordable Care Act, followed by Idaho, Montana, North Carolina and California, according to a study by WalletHub, a website devoted to helping consumers and small business owners make good financial decisions.

“It’s a 20% drop in relative terms,” he said. Remember, “Florida did not expand Medicaid coverage. If it did, it would have made it an even more significant drop” in the uninsured.

The study also found that 240,232 people in Florida enrolled in Medicaid, the state-run public health insurance program, between summer 2013 and April 2014, and that 21.28% of Florida’s population under age 64 is on Medicaid.

Mr. Papadimtriou estimated that Florida’s uninsured rate would have dropped to about 12% had state officials chosen to expand Medicaid under Obamacare. As a result, he said, Florida taxpayers are helping fund Medicaid expansion in other states but are getting no benefits from it in their own state.

“It doesn’t make sense,” he added. “It’s more of a political statement.”

Last month, healthcare advocates held a news conference call to persuade Florida legislators to expand the state’s Medicaid program, saying about 800,000 Floridians fall into the so-called “coverage gap” because they earn too much to qualify for Medicaid but not enough to be eligible for federal tax credits under Obamacare.

Although federal dollars have been available for Medicaid expansion, Florida legislators have expressed concerns about the long-term costs to the state.

Mr. Papadimtriou called the first open enrollment period under Obamacare largely a success, saying roughly 12 million people nationwide have gotten health coverage under the program who previously did not have it.

Massachusetts, which had the lowest percentage of uninsured before Obamacare at 4.35%, further reduced that to 1.2% in the program’s first year.

Mr. Papadimtriou said Massachusetts’ low rate virtually means its population is fully insured, as Obamacare built on the prior success there of “Romneycare,” referring to the Massachusetts state health care reform law passed in 2006. The law had the aim of providing health insurance to nearly all state residents.

“They had essentially done the work before” Obamacare, he said.

Others see the first year of Obamacare as making significant progress.

“So far, we’ve made a tremendous dent in [the number of] people uninsured. And that was just the first period of open enrollment,” said Rachel Klein, director of organizational strategy for Families USA, a nonprofit dedicated to having high-quality, affordable health care for all Americans.

She noted that under Obamacare every state reduced its numbers of uninsured, and said that those numbers should continue to drop each year under the program.

Still, she said, challenges remain to the continued expansion of health care. That includes a group of people across the nation who have been hard to reach with information about the program to help them enroll.

“Some people didn’t respond to the advertising and the outreach,” she said.

That lack of information means some people aren’t aware of the financial assistance that’s available under Obamacare to help them purchase private insurance, Ms. KIein said. They don’t seem to realize, she added, that federal tax credits are available to people earning up to 400% of the federal poverty level and that the law allows them to take those credits in advance of filing their tax returns.

Another challenge is a lack of awareness about the in-person assistance available to those who want to enroll.

“There are impartial advisers funded by the federal government and trained to help people navigate through the process, from filling out the application to figuring out which plan is best for them,” she said. “There’s a ‘Find Local Help’ button on the marketplace websites.”

The federal government has put the number of newly insured nationwide under Obamacare at 10.3 million, and more than 7.2 million additional people enrolled in Medicaid and the Children’s Health Insurance Program.

While “enrollment in states that expanded Medicaid has risen by 18.5% since before open enrollment in the marketplace began, states that have not expanded reported only a 4% increase in enrollment during this same period,” Cindy Mann, director of the federal Centers for Medicaid and Children Health Insurance Program services, wrote this month in a program update.

“Not only would this change the lives of some of our most vulnerable neighbors,” she added, “a Medicaid expansion in these states would bolster our health system and our economy.”

4 Responses to Obamacare paradox in Florida