Advertisement
The Newspaper for the Future of Miami
Connect with us:
Front Page » Arts & Culture » Redevelopment agency gives museum $1 million 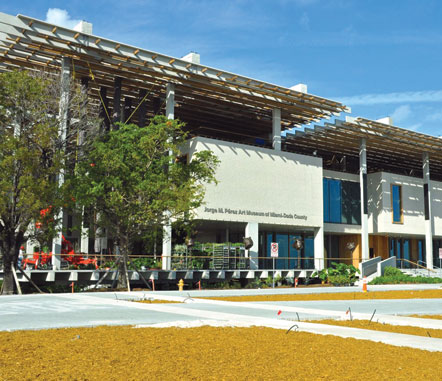 With the intention that children within the district will have better access to art and culture, Miami’s Omni Community Redevelopment Agency (CRA) has granted $1 million to the Perez Art Museum Miami (PAMM).

“PAMM has expressed an interest in contributing toward the redevelopment efforts of the Omni CRA and has agreed to develop several new community programs which will enhance, educate, support and provide” a community benefit to the area, according to an agency memo.

“I struggle with this,” said Francis Suarez, city commissioner and CRA board member. The organization has already contributed heavily to museum programming, he said, and a budget presented with the grant request included $245,000 for marketing and publicity. It included $85,000 in advertising agency fees, Mr. Suarez said.

“Let’s back away from the word ‘advertising’,” said Thom Collins, museum director. He said “creative communication” about programming is needed. “People know the museum is open, but these programs take place on an almost-daily basis,” which many might not know, he said.

The museum must get the word out to teachers and students, residents as well as tourists, he added. Half the advertising budget is for hard costs like street banners, wraps for Metromover cars, media events and a disguise for an unattractive pump station, he explained.

“We are screened by an enormous construction site,” Mr. Collins said, referring to the Patricia and Phillip Frost Museum of Science, set for completion next year. “We need to send teams to the neighborhoods, and to invest in social media, television and radio, which is crucial to reaching a young audience.”

The museum is piloting and hopes to make permanent a number of programs to bridge the gap between itself and inner-city kids, he said. PAMM in the Neighborhood brings teachers, activities and art supplies to summer camps and community centers, and offers free museum admission to participants. More than 6,800 children were scheduled to participate this summer. An after-school studio brought 80 children ages 8 through 10 from underserved areas to the museum for art projects, while PAMM Teens offers young people the opportunity to create digital content.

The museum offers free admission on each month’s first Thursday and second Saturday, which includes hands-on activities for kids, and workshops, talks and lectures, performances, films and video shows, according to a memo submitted to the redevelopment agency in support of the grant.

The agency is to receive a credit line in all museum marketing associated with the programs, and its logo is to be prominently used.

“These recognition benefits will help the Omni CRA to meet its goals to eliminate slum and blight through education and by attracting visitors directly into the Omni CRA district, and attracting economic development to the district,” the museum’s memo continued.

Hundreds of children who live near the museum aren’t able to take advantage of it, said Keon Hardemon, city commissioner and CRA board member. “What do you do for children from other areas?”

“We will reach out beyond the CRA,” Mr. Collins said. Some of the teachers and students in the programs come from economically disadvantaged areas, but not necessarily within the Omni CRA, he said.

The programs should be offered first to children in the redevelopment area and then to those in other neighborhoods, Mr. Suarez said, to which Pieter Bockweg, agency executive director, agreed.

The agency will evaluate results of the one-year grant when it expires and then decide whether to renew it, Mr. Bockweg said after the meeting.