Advertisement
The Newspaper for the Future of Miami
Connect with us:
Front Page » Latest News » Miami International on-time flights soar 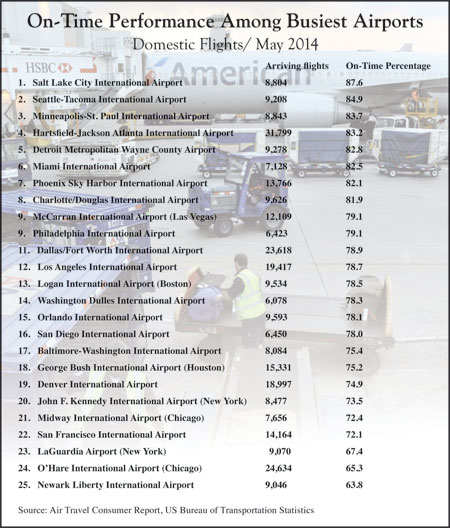 Miami International Airport ranks sixth in on-time flight performance among the nation’s 25 busiest airports, according to data in the US Department of Transportation’s latest monthly Air Travel Consumer Report.

According to the report, which covers domestic flights only, 82.5% of arriving flights and 82.2% of departing flights at Miami International were on time in May, the last month for which data are available.

That was better than an on-time average of 77.3% for all major US airports in May, according to the department’s Bureau of Transportation Statistics. A flight is considered late when it arrives 15 minutes or more behind schedule.

Miami International’s on-time performance in May was an improvement from the airport’s figures from a year earlier, in May 2013, when it posted an on-time arrival rate of 81.1% and an on-time departure rate of 79.6%, Bureau of Transportation statistics show.

However, May’s performance at Miami International was below the airport’s on-time rates for both March and April.

American Airlines, Miami International’s largest carrier, posted an on-time performance rate in May of 84.6% for arrivals in Miami and 80.7% for departures from Miami. The figures cover domestic flights only.

American’s regional carrier, American Eagle, Miami International’s second-largest domestic carrier, posted an on-time arrival rate of 80.5% and an on-time departure rate of 87.6% in Miami in May.

As the nation’s largest domestic carrier, Southwest’s struggles with on-time performance this year have made recent headlines. From January through May, Southwest posted just a 70.5 % on-time arrival rate nationwide, statistics show.

Southwest has said the drop in its on-time rate was caused by scheduling too many flights at the most popular takeoff times.

“We wouldn’t have made these changes if we thought it would have had this kind of impact,” Steve Hozdulick, Southwest’s senior director of operational performance, told the Los Angeles Times last month.

To fix the problem, Mr. Hozdulick said, Southwest is adding more cushion time to its flight schedules, starting this month, in an attempt to improve its on-time rate to about 83% by the end of August.