Advertisement
The Newspaper for the Future of Miami
Connect with us:
Front Page » Government » ‘Emergency’ Domino Park upgrade 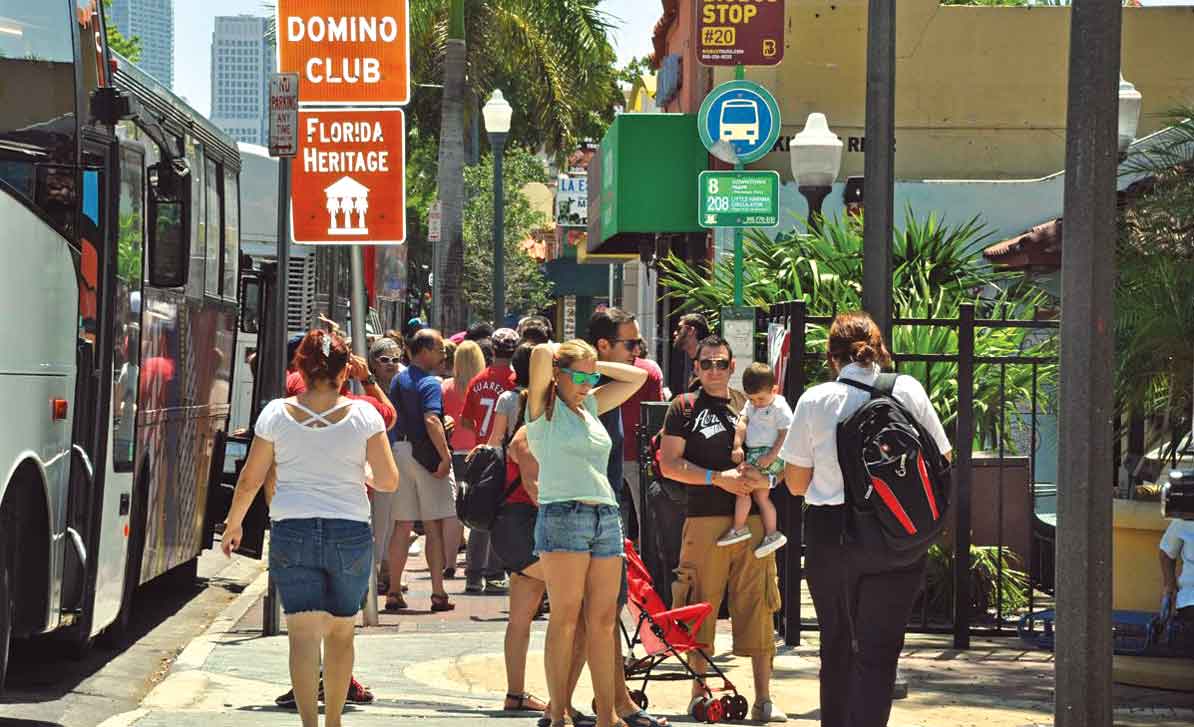 Miami Commissioner Frank Carollo fought for and received funding to make improvements this summer to two popular venues in Little Havana, the heart of his District Three.

The money will go toward Máximo Gómez Park – known as Domino Park – and Tower Theater, which happen to be next door neighbors on Southwest Eighth Street (Calle Ocho).

The funds for improvements and maintenance will come from impact fees paid to the city by developers, and some federal dollars left over from completed projects.

Allocation of the funds took considerable time, with prolonged debate among commissioners and the city administration. It also required an emergency commission vote – requested by Mr. Carollo, who didn’t want to wait until after the August break – and an amendment to the zoning ordinance.

All this passed on 4-to-1 votes. Marc Sarnoff, the lone no vote, wasn’t having any of it. He said impact fees can’t be spent as Mr. Carollo requested.

It all began with Mr. Carollo asking for a “point of privilege” to discuss an item that wasn’t on the July 24 agenda.

He said that many times he’s asked the Department of Capital Improvement Programs and the City Manager’s Office about potential sources of funding for the park and theater, only to be told that information wasn’t available.

“All I get are excuses,” said Mr. Carollo, who has repeatedly complained that city staffers don’t respond to his requests for information – details he said he needs to make informed decisions on important matters.

Mr. Carollo said he was frustrated and tired of getting the runaround, and he tried to get a motion approved to direct the manager to search all available funding sources to find cash to improve the park and theater.

He said Little Havana hasn’t gotten the funds and attention that other areas of the city have.

Mr. Carollo said it seems the manager’s office and others are more receptive to certain people and projects, while being less interested in areas like Little Havana.

“When the right strings are pulled… it gets there.… Little Havana needs its fair share,” Mr. Carollo said.

“I’m not asking for anything unreasonable,” he continued. “I did my homework. I gave the administration possible funding sources” to explore for leftover dollars.

Addressing Mr. Carollo, Mr. Alfonso said, “You’re right. You ask for information a lot. In my mind, we gave you the information you asked for.”

Mr. Alfonso went on, telling Mr. Carollo that he and his staff meet with the commissioner often. He also said “timing is important” and that things take time.

“I told you last week, we need more time,” Mr. Alfonso said. He defended his staff and other officials, and noted that certain funds come with strict rules and might not be available to spend on every type of project.

“We don’t push a button and get those numbers,” Mr. Alfonso said. He said his staff will work to get what Mr. Carollo is requesting, but it will take time.

“I’m not here to point a finger at anyone,” Mr. Carollo said, but quickly added that he wants accountability.

Mr. Carollo said he would fight for the funds. “Excuses are not good enough anymore,” he said.

Mr. Carollo said he hoped to get funds to pay for new fencing at Domino Park, which he said is internationally famous and draws a steady stream of tourists to the area. Dominos is a popular game among Cuban-Americans, who frequent the park and match wits and skill in the game.

Commission Chair Wifredo “Willy” Gort backed Mr. Carollo, saying the small Domino Park is one of the biggest tourist attractions in the US, bringing 15 to 20 tour buses to Little Havana daily.

Mr. Gort did question whether a vote was needed to have the manager find the funds for these two projects. “Can’t we just ask” him to find the money, Mr. Gort said.

The discussion led to an item that was on the agenda: amending the zoning ordinance on use of impact fees.

The purpose of the amendment was to remove the minimum requirement of at least 3 acres for spending the funds on parks and to expand the definition of recreation system improvements.

“This change will allow more city parks to benefit from the use of impact funds, further enhancing and expanding the quality of park use to all City of Miami residents,” a staff memo said about the change.

In order to approve the amendment at that meeting, the commission had to waive a second reading and enact it in an emergency vote.

On the motion to treat the zoning amendment as an emergency, Mr. Sarnoff voted ‘no,’ saying he heard no evidence of an emergency.

Commissioner Francis Suarez said if they didn’t act, needed improvements to the park and theater would be long delayed; the commission, like many governmental bodies, takes an August break.

“I will articulate the emergency. Any project that gets postponed by one-and-a-half to two months is an emergency,” said Mr. Suarez.

Chairman Gort said he approved of using the impact fees for Domino Park because it benefits the entire city.

In the end, the commission approved spending $205,292 for Domino Park improvements from impact fees.

In a separate vote, the commission agreed to spend a little more than $140,300 for Tower Theater repairs. Those funds came from leftover allocations to other projects, including some Community Development Block Grant funds, after the commission learned that impact fees can’t be used for repairs and maintenance.

The theater, undergoing rehabilitation for more than a year, has been operated for the past decade by Miami Dade College as a multi-screen movie theater.

The theater at 1508 SW Eighth St., known for its 40-foot steel tower, is one of Miami’s oldest cultural landmarks. It opened in December 1926 as what was called the finest state-of-the-art theater in the South and later served as a historic gathering place for cultural connections in Little Havana.

The theater closed in 1984, was remodeled again under city ownership in 2002 and turned over to the college under a management agreement.