Advertisement
The Newspaper for the Future of Miami
Connect with us:
Front Page » Top Stories » Miami tops US in foreclosures

Miami tops US in foreclosures 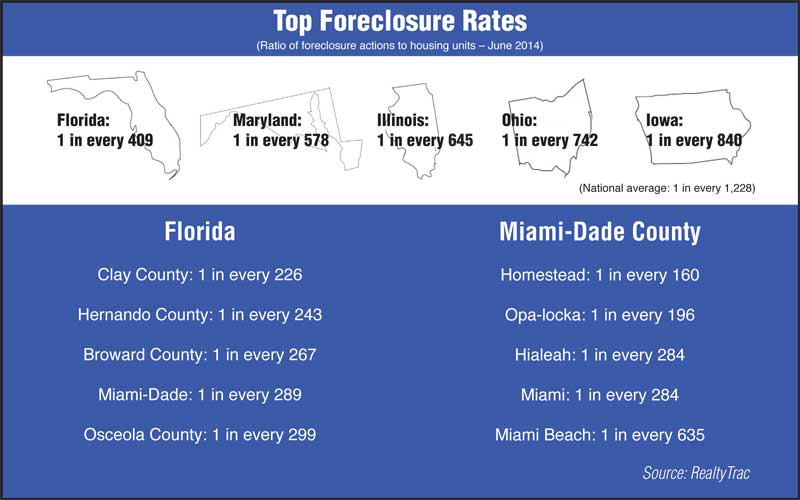 Florida accounted for the nine highest foreclosure filing rates among US metro areas from January through June, according to RealtyTrac’s Midyear 2014 US Foreclosure Market Report.

In addition to Miami, they were: Orlando as No. 2, Port St. Lucie No. 3, Palm Bay-Melbourne-Titusville No. 4, Tampa Bay-St. Petersburg No. 5, Lakeland No. 6, Deltona-Daytona Beach-Ormond Beach No. 7, Ocala No. 8 and Jacksonville No. 9.

Nationwide, foreclosure filings (default notices, scheduled auctions and bank repossessions) dropped 19% in the first six month of 2014 from the same period last year, according to the report.

“Nationwide foreclosure activity in June reached an important milestone, dropping to levels not seen since before the housing price bubble burst in August 2006,” RealtyTrac Vice President Daren Blomquist said in a statement.

“Over the next six to nine months,” he said, “nationwide foreclosure numbers should start to flat line at consistently historically normal levels.”

Throughout Florida, 121,412 properties had a foreclosure filing in the first six months of the year, the most of any state but down 16% from the previous six months and down 22% from the same period last year.

Although the number of filings dropped, Florida’s foreclosure rate was the nation’s highest in the first half of the year: 1.35% of housing units with a foreclosure filing (one in 74) – nearly three times the national average.

“There continue to be concerning trends in some states and local markets that clearly indicate those markets are not completely out of the woods when it comes to the lingering foreclosure problem left over from the housing bust,” Mr. Blomquist said.

“While it’s important that any remaining foreclosure infection is addressed promptly to keep it from festering,” he added, “foreclosures are no longer a widespread contagion threatening to derail the housing market’s return to full health.”