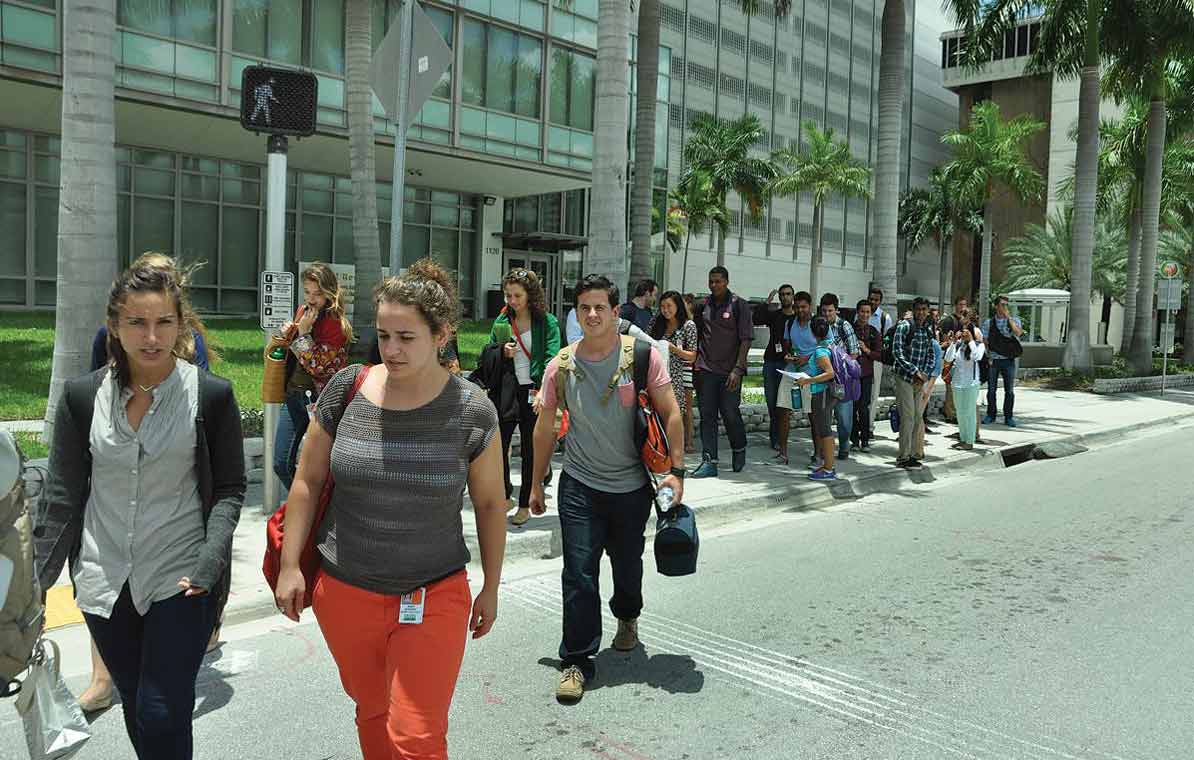 In Miami-Dade County, the farther away from the central business district you live, the less likely you are to walk.

For every mile away from downtown the amount of walking among county residents decreases, reports a recent study from the University of Miami. It turns out that suburban sprawl out west encroaches not just on the Everglades, but the walking habits of county residents.

Instead of pushing development farther out west away from areas where residents are more inclined to walk, it may be time to look at ways to encourage walkable mixed-use development within the current development boundaries, said study co-author Scott Brown, Ph.D., research assistant professor in public health at the University of Miami’s Miller School of Medicine.

Nearly 400 recent Cuban immigrants were surveyed by researchers to assess the relationship between walking habits and place of residence in Miami-Dade.

What they found was that among the relatively active study population, walking habits were greatly determined by how close someone lived to the urban development boundary (UDB). The UDB is the western boundary of the county that delineates protected lands like the Everglades from sites that can potentially be developed for commercial or residential use. Development out by the UDB tends to be low-density, with fewer retail and commercial properties.

“Within a few weeks of arrival in the US, as a function of where people lived in Miami-Dade County, there were marked differences in amount of walking,” Mr. Brown said.

“For each one mile east of the UDB there was an 11% increase in walking, which is pretty remarkable,” Mr. Brown said. “All the more so because this was a population that when asked about their walking and physical activity in Cuba, 70% reported that they regularly walked or cycled.”

For each mile west of the central business district (CBD) walking decreased 5%. The study population, while fairly active and not healthy, walked less in the US than in Cuba.

Residential areas without commercial properties like grocery stores or schools and parks appear to discourage walking. With more and more sprawl reaching out west toward the Everglades, there are fewer and fewer incentives to head out the front door and walk.

“We found that there were fewer destinations for walking out by the UDB,” Mr. Brown said. Moving forward, researchers hope their findings encourage smarter development within the existing UDB.

“There are ways to create walkable destinations that might potentially reduce risk factors for obesity or related diseases such as diabetes or cardiovascular disease that have also recently started to be linked to increased sprawl,” Mr. Brown said. “Extending the boundary westward could have negative human health benefit.”

“Closer to the urban development boundary there weren’t many places that people could walk to such as restaurants and shops with sidewalks connecting to homes, whereas there tended to be more walkable destinations including businesses, food sources, schools, etc., closer to the downtown central business district,” Mr. Brown said.

Other areas like Midtown, South Miami, Lincoln Road and Brickell have also been developed in ways that encourage walkability because shops and restaurants sit near homes, condos and mixed-use buildings, he said.

Certain factors get people walking. Sidewalks, shade trees and a sense of safety based on things like streetlights will encourage walking, Mr. Brown said.

“We’re not saying ‘don’t develop,’” he said. “We’re suggesting some type of infill of existing lands, without pushing the UDB west.”

Existing red tape for mixed-use development might block inclusion of a coffee shop or hair salon in a new building. Easier access to permits or less stringent zoning for mixed-used properties might allow development that encourages walking within a neighborhood, Mr. Brown said.

By filling in lands east of the UDB and developing in a way that encourages walking, it might be possible to build a Miami-Dade that caters not just to urban growth but the overall health of its residents.