Advertisement
The Newspaper for the Future of Miami
Connect with us:
Front Page » Top Stories » Miami Beach thinking of rules for tour buses 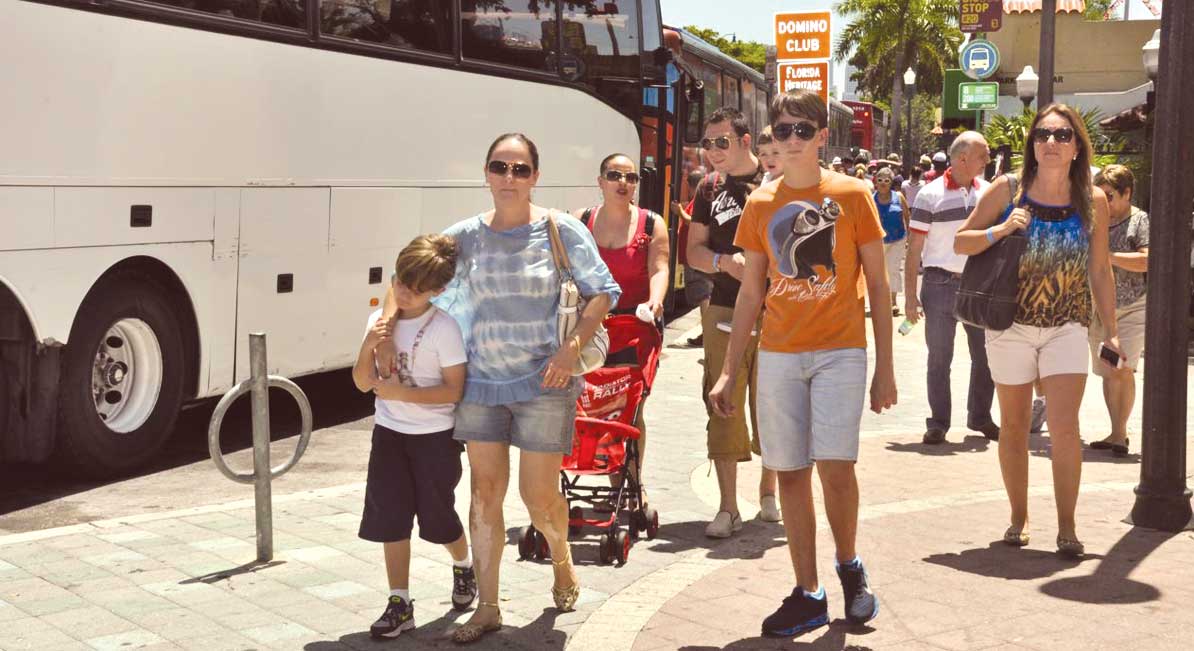 The City of Miami Beach has been looking into regulating the sightseeing tour buses that run in the municipality.

Since the beginning of the year, officials had explored two approaches: Issuing a competitive solicitation for one or two companies to set up kiosks and stops on Ocean Drive, a coveted stop for the industry as the street is popular with tourists; and a legislative approach to regulation, such as drafting an ordinance.

But last week, the City Commission didn’t move forward with issuing a competitive solicitation in the form of an invitation to negotiate for one or more companies to set up stops on Ocean Drive and nearby the 1700 block of Washington Avenue.

Instead, after much debate among commissioners, city staff withdrew the item administratively and the issue is likely to come back up for discussion at a future Neighborhood/Community Affairs Committee meeting.

The invitation to negotiate, or ITN, would have ultimately led to the city entering into a concession agreement with the selected companies.

During the debate at the June 11 commission meeting, officials were divided how – if at all – Miami Beach should regulate the sightseeing bus tour industry.

“I don’t think we need to be in the concession business. And I think that we shouldn’t allow these buses to be stopping on Ocean Drive,” said Mayor Philip Levine, adding that he prefers regulation.

Commissioner Michael Grieco said he is not in favor of a competitive solicitation and added that the city can’t really regulate the industry.

Per current rules the City Commission approved earlier this year, tour buses aren’t allowed to stop on Ocean Drive until there is a policy in place, according to city records.

Sightseeing buses are allowed to stop on Miami-Dade Transit stops if the company has a permit, city staff told Miami Today. There aren’t any public transit stops on Ocean Drive.

Five companies operate tour buses in Miami Beach. Three of them – City Sightseeing Miami, Big Bus Tours and Miami Open City Tour – operate on an open loop, meaning that they have several stops along their route where passengers may get off. Duck Tours, known for its conversion capabilities that allow it to run on land and on water, and Pirate Tours run on a closed loop, or the bus picks up and drops off passengers at the same location.

The invitation to negotiate would have targeted companies that run on an open loop.

“The purpose of having an agreement with a kiosk on Ocean Drive or wherever was No. 1, so the city could derive revenue from it and No. 2, so that the city could impose reasonable regulations,” Chief Deputy City Attorney Raul Aguila said at the meeting.

The other alternative the city had explored was drafting regulations, such as an ordinance. At a committee meeting earlier this year, attorneys told some commissioners sitting as the Neighborhood/Community Affairs Committee that legislative regulation should be done cautiously. Other cities have faced court sanctions for placing such regulations on the sightseeing bus industry.

Duck Tours sued the City of Key West and a judge ordered the municipality to pay a multi-million dollar settlement.

City Manager Jimmy Morales told the commission last week that the issue of how to deal with the buses came up when Gray Line Miami, the company that runs the double-decker Big Bus Tours, was assigned a stop on Ocean Drive administratively.

“They had a monopoly on stopping, and I brought to this commission the discussion that it didn’t seem fair, either no one should or everyone should” be granted a stop, Mr. Morales said.

City staff also previously told Miami Today that the issue arose as a way for the city to deal with the high demand by the industry to stop on Ocean Drive.

“Frankly when a bus idles for 15 minutes in a community, it’s just not OK,” Commissioner Deede Weithorn said at the meeting.

The ITN concession agreement item was sponsored by Commissioner Ed Tobin, who left the meeting before the item came up for discussion.