Advertisement
The Newspaper for the Future of Miami
Connect with us:
Front Page » Government » Is Marlins Park viable soccer stadium site? 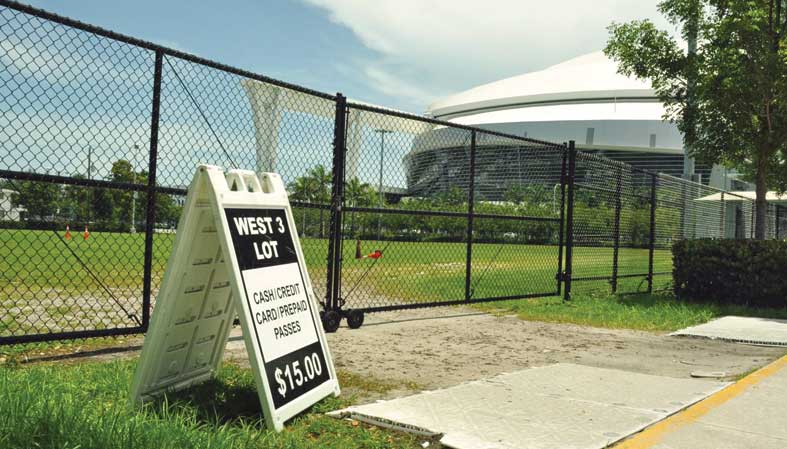 County and city officials are awaiting the David Beckham group’s next move in its quest to place a Major League Soccer franchise in Miami, but already some are nudging the group to a site west of downtown next to Marlins Park.

Major League Soccer scouted the site years ago and the site was mentioned for potential development of a soccer stadium in the 2009 agreement between the county, the city, and the Marlins to build the ballpark at the former site of the Orange Bowl in Little Havana off the Dolphin Expressway.

The city-owned site is on the west side of the ballpark, between the park and Northwest 17th Avenue.

However, a representative for Mr. Beckham’s group infamously called the site “spiritually tainted,” referring to the intensely controversial use of county and city bonds that paid for most of Marlins Park and nearby parking garages to be paid off in coming decades at ballooning costs to local taxpayers.

Yet officials are holding out hope that Mr. Beckham’s group will reconsider now that the group’s first two choices – PortMiami and another downtown waterfront site next to AmericanAirlines Arena – have been removed from the negotiating table by the county and the city, respectively.

“I hope they consider it,” said County Commissioner Bruno Barreiro, whose district includes the ballpark site. “I continue to push for it. I believe it’s the right location.”

Miami Mayor Tomas Regalado caused a stir last week after he announced that the second considered site, the city-owned “Florida East Coast” slip on Biscayne Bay on the north side of the arena, is “inappropriate” for a soccer stadium.

The announcement came after the mayor and City Manager Daniel Alfonso met with Miami Beckham United about the site; called the Beckham group’s offer “generous,” but said no negotiations took place.

It prompted a terse discussion at last week’s city commission meeting initiated by Commissioner Frank Carollo, whose district includes Marlins Park. Mr. Carollo was upset that he wasn’t a part of that meeting with the Beckham group.

“Unbeknownst to me,” Mr. Carollo said, “there was another meeting and suddenly (the slip site) is off the table.”

The discussion ended with the commissioners directing the city manager to include them in any future negotiations on a soccer stadium.

“We respect Mayor Regalado’s decision,” Miami Beckham United said in a statement. “Our package was the most equitable soccer stadium proposal that Miami, or any other city in America, has ever seen – 100% privately funded without any local taxpayers’ money.”

It added: “Our team will now pause and weigh alternatives.”

Residents near the site oppose a stadium being built there as it would take up part of a public park (Museum Park) north of the slip, fill in the slip itself and block the waterfront, and draw more crowds to the neighborhood.

“The fact that there are now 70,000 residents (in that immediate area) shows that the downtown community has changed,” Mr. Alfonso said. “The residents and homeowners associations there were a factor taken into account.”

There was a gap between what the Beckham group offered and what the city felt the site is worth.

“What the stadium team felt was the value was different than what the city feels it is,” Mr. Alfonso said.

nThe city reconstructed the slip several years ago with $17 million in bond and grant monies that would have to repaid immediately if the site is altered.

Mr. Alfonso said the city isn’t trying to get a better offer on the slip site from the Beckham group.

The site next to Marlins Park, he said, was noted in a “global agreement” between the county, city, and the Marlins for a future soccer stadium.

City Commissioner Marc Sarnoff, whose district includes the slip site, said he was involved in earlier talks between the mayor and the Beckham group and he wasn’t surprised that the site was removed from consideration.

Mr. Sarnoff said hundreds of people have moved into that neighborhood in recent years, particularly into high-rise condominium towers across the street (Biscayne Boulevard) from the slip – and a number of them were vocal in their opposition to a stadium.

He added that he hopes a deal can be worked out to place the stadium next to Marlins Park.

Commissioner Barreiro said the city and the county would be involved in negotiations to put the stadium at the Marlins site, as the “footprint” of the stadium would be owned by the county for property tax purposes.

Mr. Barreiro called the Marlins site “the best place” for the stadium that would offer the Beckham group “the path of least resistance” from residents and officials. The group has wanted its stadium downtown, he noted, but the Marlins site may be the closest the group can get.

Also, he added, the county may be willing to explore a mass transit connection to the Marlins site.