Advertisement
The Newspaper for the Future of Miami
Connect with us:
Front Page » Communities » IKEA sets up shop near Dolphin Mall 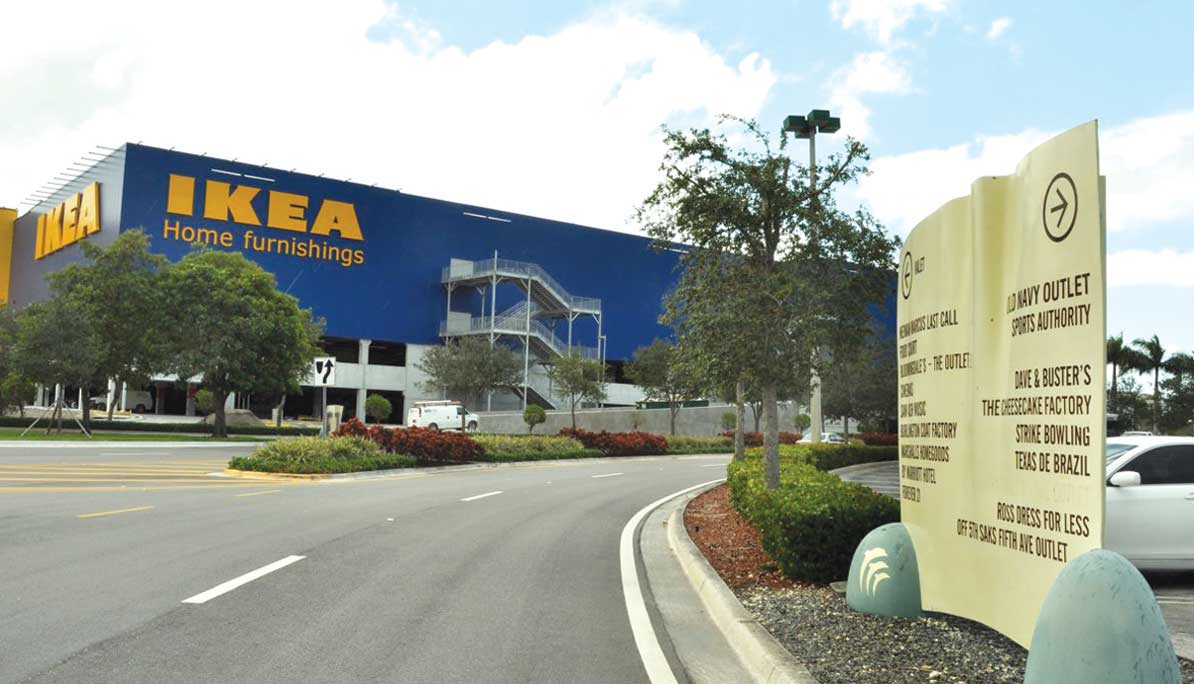 Five years after a county consultant looked into the market viability of a mega-mall opening in West Miami-Dade no such shopping center has been built.

But the concept hasn’t fizzled out – it’s just on hold.

So says County Commissioner Dennis Moss, who pushed for the mega-mall study.

“I would like to see something happen in that area that would allow us to compete with the Sawgrasses of the world,” he said, referring to Sawgrass Mills mall. Sawgrass Mills, located in Sunrise, is home to more than 350 stores, about 40 of which are outlets for high-end brands.

While Miami-Dade County still doesn’t have a mall to compete with Broward County’s Sawgrass Mills, Mr. Moss said the county study had an impact.

Later this summer, Swedish furniture store IKEA will open its first Miami-Dade branch within the boundaries of the studied area.

“I believe that the study might have been something that swayed them [IKEA] to really take a look at this particular area,” Mr. Moss said.

Indeed, county consultant Lambert Advisory indicated in its report that IKEA was a retailer missing in Miami-Dade County, records show. The nearest store is in Broward County.

The new IKEA is located on about 14.6 acres just west of Dolphin Mall and east of the Turnpike. Not only is the 416,000-square-foot facility to sell furniture, but it is to be the home of a 600-seat Swedish restaurant, a Swedish market and a café, according to the company’s website. The store will create about 350 jobs.

County consultant Lambert Advisory studied the market viability of the area from Miami International Airport west to the Turnpike and from the Dolphin Expressway north to about Northwest 41st Street. That section includes the City of Doral as well as parts of unincorporated Miami-Dade, and it’s within the district of County Commissioner Jose “Pepe” Diaz, who sponsored Mr. Moss’ push for the mega-mall study.

As some may be ready to point out that the area is already home to two large malls, Commissioner Moss said that’s exactly why he wanted the county to look into the viability of a mega-mall between the existing shopping centers.

The area is home to Dolphin Mall, which boasts more than 240 stores as well as diverse dining options and Miami International Mall, which is home to brands from JCPenney, Sears and Kohl’s to Macy’s and H&M.

Mr. Moss said he is interested in a mega-mall to be erected between the existing shopping centers or nearby. The area, he added, is privately owned and zoned for mixed-use retail.

Lambert Advisory’s study, published in 2011, provided detailed information about the market viability for a mega-mall and for Miami-Dade’s overall retail sector.

The findings: By 2016, retail demand in Miami-Dade will increase to 112.1 million square feet of retail space as the county is a thriving shopping destination mainly thanks to international visitors who account for two-thirds of visitor shopping expenditures. But Miami-Dade needs to look into its public transportation to support existing and future shopping and entertainment districts, according to the report.

On Thursday (6/19), Commissioner Moss, sitting as a Miami-Dade Metropolitan Planning Organization (MPO) board member, will ask for the rest of the MPO board to approve a resolution calling for a $125,000 study that would plan how to implement rapid-transit bus service along four county corridors, one of which is the east-west Dolphin Expressway thoroughfare.

The expressway runs near the malls as well as nearby a slew of other establishments, including the airport and the Doral warehouse district.

Mr. Moss said he is pushing for bus service expansion since that is the more cost-effective alternative to building light or heavy-rail.

Ultimately, whether a mega-mall opens in West Miami-Dade would depend on the private sector. The county may only prompt ideas through its studies.

“The [county] study started the dialogue and the discussion,” Commissioner Moss said. “The mall folks can now look at that document and say, ‘I’ve got at least some info that I can be able to use to analyze whether or not my shopping venue can work out there.’”

5 Responses to IKEA sets up shop near Dolphin Mall