Advertisement
The Newspaper for the Future of Miami
Connect with us:
Front Page » Government » Island Gardens says work has begun 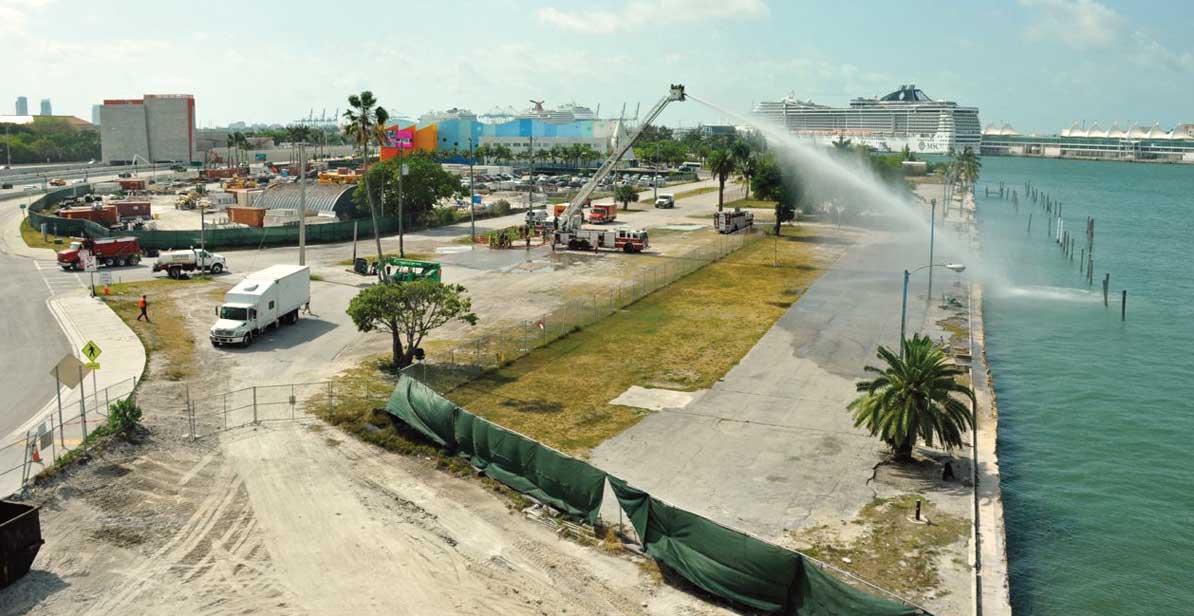 In 2001, Miami voters approved the lease of high-profile city-owned land on Watson Island for a planned multi-million dollar resort and marina to be called Island Gardens.

Today, 13 years later, and the land remains barren and overgrown.

City commissioners – and state officials too – have granted several extensions and voted to reapprove the lease, while at least one commissioner has fought that and tried to revoke the lease to Flagstone Island Gardens LLC.

At the latest lease extension 12 months ago, Commissioner Frank Carollo voted no.

Fed up with the fact that a choice city property has remained vacant all these years, Mr. Carollo is pushing for a voter-approved provision requiring projects on leased city land start within four years of approval. If that time elapses with no construction, it would have to come back before the voters.

The proposed referendum is on today’s (6/12) agenda for the commission.

On May 22 the commission directed the city attorney to draw up a ballot proposal.

The proposed charter amendment would require additional voter approval for a development on city-owned property “where the developer has not obtained the necessary building permits within four (4) years and has not completed twenty (20%) percent of the construction within five (5) years of the effective date of the lease.”

If approved by the commission, the ballot question will go before voters Aug. 26.

Flagstone has been promising for more than a decade to turn a corner of Watson Island into a multi-million dollar resort destination with dual hotels, high-end retail and a mega-yacht marina.

The years of inaction by Flagstone were weighing on Commissioner Carollo when he first proposed the charter amendment.

“Thirteen years of promises and the ground still is not broken,” he said May 22.

Voters’ approval of a project should not be “timeless,” he said.

In regard to Flagstone, Mr. Carollo added, “Thirteen years after the fact, they have not broken ground. It really is unacceptable.”

As for allowing leases of city-owned property to go on indefinitely, “let’s let the voters decide,” he said.

Commission Chairman Wifredo “Willy” Gort said he supported Mr. Carollo and would go even further – if construction didn’t begin with a set time, the developer would lose the right to develop the land.

Meanwhile, representatives of the Island Gardens developer said this week that work on the project has begun.

“Flagstone has met their June deadline and the mitigation has started,” said Bahar Bayraktar, director of communications and branding for Flagstone Island Gardens.

Brian May, a lobbyist for the company, said the marine mitigation at the site began Saturday, May 31, ahead of a June 2 deadline, and that the work constitutes the start of construction.

Ocean Consulting, a Miami firm, has begun the mitigation, which includes removal and relocation of items like sponges, sea grass and coral, said Mr. May. The work is expected to take 60 to 90 days. Once completed, dredging for the mega-yacht marina will commence, he said.

Mr. May said the mitigation is considered the start of the project and there is no issue with whether the developer met the June 2 deadline, as required by the latest lease extension.

“This work is part of the master schedule,” he said, “and everyone knows it’s the first thing that has to be done… That’s in accordance with our marina construction permit.” The permit was issued by the Florida Department of Environmental Protection, he said.

“We are under way – it’s on its way to being built,” said Mr. May of Island Gardens.

The lease to Flagstone for the project has been controversial, as other deadlines came and went with no progress.

It remained a matter of contention last month when city and state officials were called on May 8 to renew agreements and deed waivers to allow the project to move forward.

Critics of the project have lambasted city leaders for not forcing the developer to build, and for extending the lease without making incremental increases in the rent based on rising property values. Others continue to voice opposition based on fears of added traffic congestion and potential harm to the environment.

Numerous delays, including the economic slide and port tunnel dredging, have for years held back Flagstone’s plans.

The city owns Watson Island and is leasing part of it to Flagstone, which has been paying $2 million a year rent. Critics claim the rent is based on outdated appraisals and told the commission May 8 that Flagstone ought to be paying $7 million a year.

At the May 8 meeting, Mr. Carollo reminded his colleagues that in 2010 when the issue surfaced, he lobbied to have the city take the land back from Flagstone, but he was on the losing end of an eventual vote.

“I’m tired of this coming back to us. When does it end?” said Mr. Carollo last month.

At that meeting last month, Mr. May spoke of the economic benefits from a successful Island Gardens.

When Island Gardens enters its fourth year of operation, Mr. May said, it will mean about $12.5 million to the city in rent, taxes and fees.

The development will mean jobs for the area, too, he said. During construction, he said, the development is expected to generate 1,600 jobs. Once Island Gardens is completed it will mean 1,100 full-time recurring jobs, he told the city commission.

Mr. May said the target for project completion is December 2017.