Advertisement
The Newspaper for the Future of Miami
Connect with us:
Front Page » Transportation » All Aboard’s depot covets transit hub status 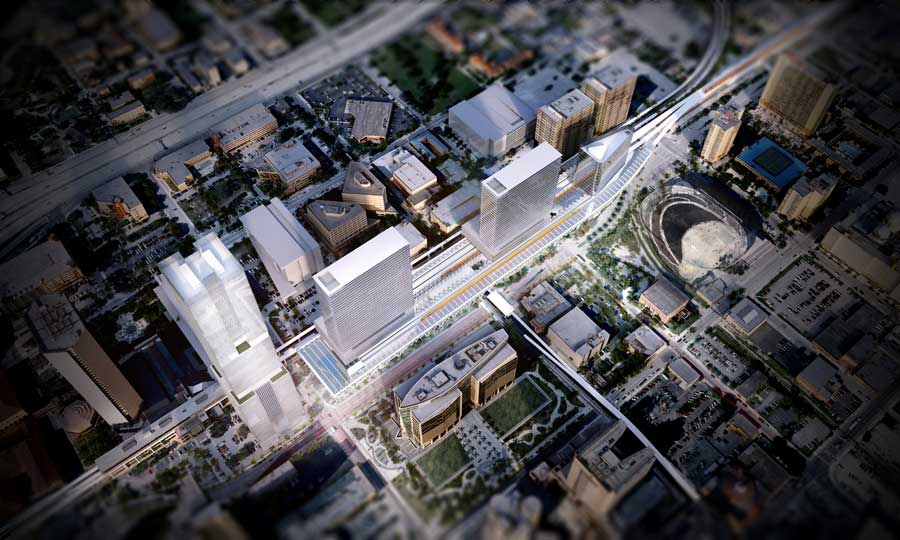 All Aboard Florida’s Miami train station might serve as a hub for other transportation modes – from a proposed north-south passenger rail and a proposed Miami Beach-bound light-rail to a bike-share and a rental-car facility.

“We are going to bring a lot of traffic. That’s the reality,” said Jose Gonzalez, senior vice president of corporate development at Florida East Coast Industries, the railroad’s parent company. “But we are hoping that a lot of that traffic is foot traffic as well, because we are hoping that it gets a lot of people out of their cars by using multi-modal transportation.”

The design of the downtown Miami station accommodates two other proposed rail systems – Tri-Rail Coastal Link, a publicly funded project that aims to provide a commuter rail linking Miami-Dade to Palm Beach counties with more stops than All Aboard Florida; and Baylink, a proposed light-rail system with at-grade tracks that might connect downtown Miami to Miami Beach, probably via the MacArthur Causeway.

As All Aboard Florida’s three tracks approach the downtown Miami station and begin escalating onto the about 50-foot-tall viaduct, the three sets of tracks will fan out to five on the station’s platform, Mr. Gonzalez said. The extra two sets of tracks on the westernmost side of the platform will be designated for Tri-Rail Coastal Link, said Joe Quinty, transportation planning manager at the South Florida Regional Transportation Authority, one of the entities behind the commuter-rail project.

“Our train cars require platforms at a different height, whereas theirs are going to … allow for a direct-level boarding so that when you walk off the train the platform is on the same level,” Mr. Quinty said. “The way we operate today is our doors are lower and require a mini-step up to the ground level.… If we have high-level platforms, CSX worries…Every new commuter-rail system that has been set up that’s not in the Northeast uses these platforms.”

In addition, the station was designed taking into consideration that All Aboard Florida passengers would have to go through secured boarding areas, while Tri-Rail Coastal Link passengers won’t.

Planners for downtown Miami’s All Aboard Florida station have also been coordinating with Baylink representatives, as the Miami Beach-Miami light-rail could have two stops near the express train station.

“What ends up happening is they are asking, ‘Where should the stations be?’ Near All Aboard Florida,” Mr. Gonzalez told Miami Today.

“That’s what we’ve coordinated. If I don’t coordinate with them now, they’ll never be able to use that station,” Mr. Gonzalez told Miami Today. “Once it’s built, it’s built.”

For its Miami station, All Aboard Florida acquired from the City of Miami a two-acre lot in Overtown where the company plans to build its headquarters building, Mr. Gonzalez said. That building might include a rental-car facility and be near a bus-stop hub, he said.

He added that All Aboard Florida is in talks with the City of Miami about including a bike-sharing program or the Austin-based Car2go car-sharing program into the station’s logistics. The blue-and-white Car2go Smart cars came to Miami streets after in 2012 the Miami Parking Authority and Car2go signed a contract allowing the company to park its cars on city streets.

While part of the plan is to prompt people to get out of cars and use other modes of transportation, planners realize that some people would prefer using their vehicles.

One Response to All Aboard’s depot covets transit hub status