Advertisement
The Newspaper for the Future of Miami
Connect with us:
Front Page » Real Estate » Mega-project due fast city, state action

Written by John Charles Robbins on May 7, 2014
Advertisement 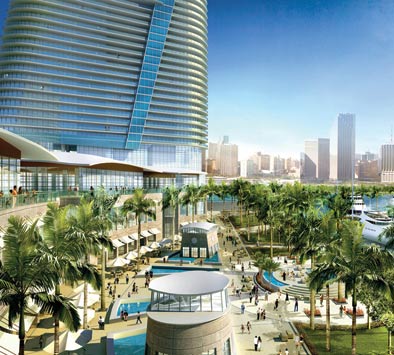 Work must begin on the massive Island Gardens mixed-use development on Watson Island by June 2 – a requirement of the latest lease extension – but that cannot happen until state officials reaffirm their approval of the project.

City commissioners will be dealing with the issue this week as well. It’s on today’s (5/8) agenda of the Miami City Commission.

The city owns Watson Island and is leasing a portion of it to Flagstone Island Gardens LLC.

The planned $640 million Island Gardens complex is to include a five-star luxury hotel, a four-star lifestyle hotel, fractional ownership residences, high-end retail and waterfront dining set on 6.5 acres of publicly accessible and landscaped open space, in addition to a marina for mega-yachts and super-yachts.

State government is involved because the state many years ago turned ownership of the island over to the city.

However, through contracts with the city and Flagstone, the state has managed to keep a hand in the cookie jar, receiving money from the developer and the city.

When the state gave the island to the city, it prohibited the city from selling or leasing any portion for any private use. The intent is that land be used solely for public purposes.

The state approved a modification of those original restrictions in 2004. It was amended again in 2011 to reflect changes in agreements between the city and Flagstone.

The last “Amended and Restated Partial Modification of Restrictions” automatically terminated on Jan. 12, 2012. This is the reaffirmation needed now by the developer, according to a staff report on the matter.

The state entity involved is the Board of Trustees of the Internal Improvement Trust Fund of the State of Florida.

One item that might give city commissioners pause this week is the draft of a new agreement between the city and the state which, if approved by both sides, requires the city to pay “preconstruction rent payments” to the state up front, rather than after the developer has paid the city.

And the draft says the city “shall remit” preconstruction rent payments of $206,250 to the state board within 10 days of approval of the new agreement, which represents 2012, 2013 and 2014 semi-annual rent payments.

Numerous delays, including the economic slide and port tunnel dredging, have for years held back Flagstone’s plans, which the city initially approved in 2001.

Last year the city granted Flagstone an extension to its lease of the prime island real estate, which requires work to begin by June 2.

A representative of the developer said the marina portion of the project would begin before that date.

For that to occur, the city has to authorize the city manager to negotiate and execute a new compliance agreement with Flagstone, and the state board must reaffirm its modifications of restrictions on the property.

According to the city resolution, the state board has scheduled “consideration of approval” of the modification of restrictions on its May 13 agenda.

The city’s resolution also says the development “is still in the public interest because it will convert the Property from a sparse, unimproved field to a location that will contain cultural, scenic, and recreational values that will benefit the public while at the same time retaining sixty (60) percent of the Development as open space in the form of gardens, walkways, and a waterfront promenade available to residents and visitors for cultural and recreational activities…”