Advertisement
The Newspaper for the Future of Miami
Connect with us:
Front Page » Government » $50 million pump tandems to fight flooding? 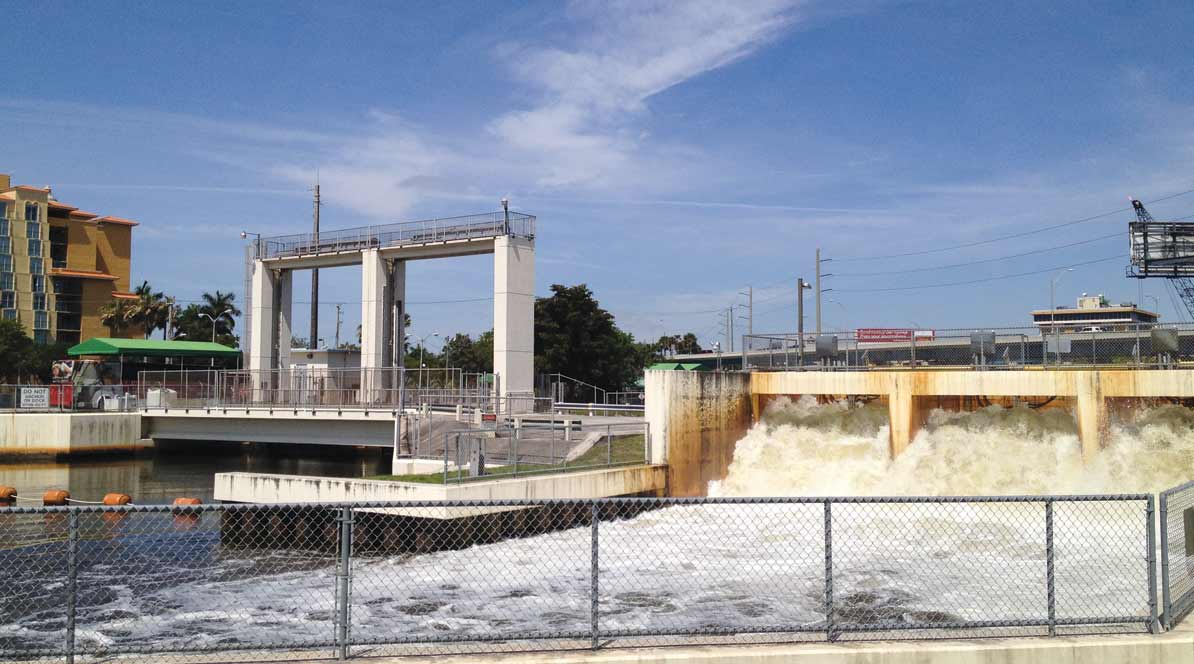 Of the 30 or so flood-control salinity barriers in South Florida, three or four usually can’t be used during high tide. That means that twice a day, water on the ocean side of the barriers is higher than upstream and gates can’t be opened to relieve flooding.

To compensate, the South Florida Water Management District has a couple of options. One is installing $25 million pumps, two of which are needed at the flood control structure at the C-6 canal directly to the east of Miami International Airport at 3975 NW South River Dr. A tour of Miami-Dade areas vulnerable to sea level rise like the flood control structure was arranged this week by the World Resources Institute, a global research organization based in Washington, DC.

The three most vulnerable flood control structures in South Florda are S-27, S-28 and S-29 north of the C-6 canal structure, said Jayantha “Obey” Obeysekera, the water management district’s chief modeler. The two pumps at that structure weren’t specifically installed to address sea level rise, but a similar set of technologies could be one fix to combat rising seas, he said. The Federal Emergency Management Agency provided some funding for the pumps because of flooding around the airport, he said.

“South Florida is very flat and we have a very high water table,” Mr. Obeysekera said. “With projections of three to four feet or even six feet in some cases [of rising sea level by 2100], the vulnerabilities could be significant in all areas of flood control, water supply and natural system restoration.

“You may ask why there is such a big range. If you know sea level rise issue, it depends on primarily the uncertainty comes from the inability to project how the ice sheets in Greenland and Antarctica melt,” Mr. Obeysekera said. “Being responsible for water management, we have to start thinking about how to respond or adapt to the sea level rise. Even if the projections are for 2100, there is going to be a smaller expected sea level rise before that.”

That smaller expected sea level rise before 2100 is what’s causing problems at flood control structures today. Originally built in the 1950s, the structures like that at the C-6 canal were built to accommodate just 6 inches of headway to account for higher water levels. With storms and surges and rising seas, that 6 inches of breathing room is already – or almost – used up.

The salinity barriers were built partly as flood control structures and partly as barriers to salt water after intense flooding in the 1940s.

“In the 1950s…the US Army Corps of Engineers and the federal government worked with the local partners to design and build what is known as the Central and South Florida Flood Control System. This [C-6 canal] structure is one of many all along the coast,” Mr. Obeysekera said. When these structures were put in to relieve the region from flooding, the canals were enlarged, which had the unintended consequence of basically draining the land.

That draining removed natural groundwater that keeps saltwater at bay, so salinity barriers were put in place to keep saltwater out of the inland areas and help regulate water levels on both sides of the structures.

“Here’s the problem: in the 1950s when the federal government or the Army Corps of Engineers designed these structures… they did not account for the kind of sea level rise projections that we have today,” Mr. Obeysekera said. “The problem is that [that] 6 inches is gone, or will be gone pretty soon if the projections materialize.”

Steps that can be taken to refortify the structures, Mr. Obeysekera said, include installing pumps like those now accompanying the C-6 canal flood control gates. However, at $25 million each, for a $50 million grand total per structure, that might not be the most cost-effective option.

“We have to be able to make sure that the systems function the way they were designed,” Mr. Obeysekera said.

The flood control structures themselves have already exceeded their lifespan. The structure at the C-6 canal, built in the 1950s, had a 50-year expiration date. It’s more than a decade past that.