Advertisement
The Newspaper for the Future of Miami
Connect with us:
Front Page » Latest News » Commercial land prices soaring 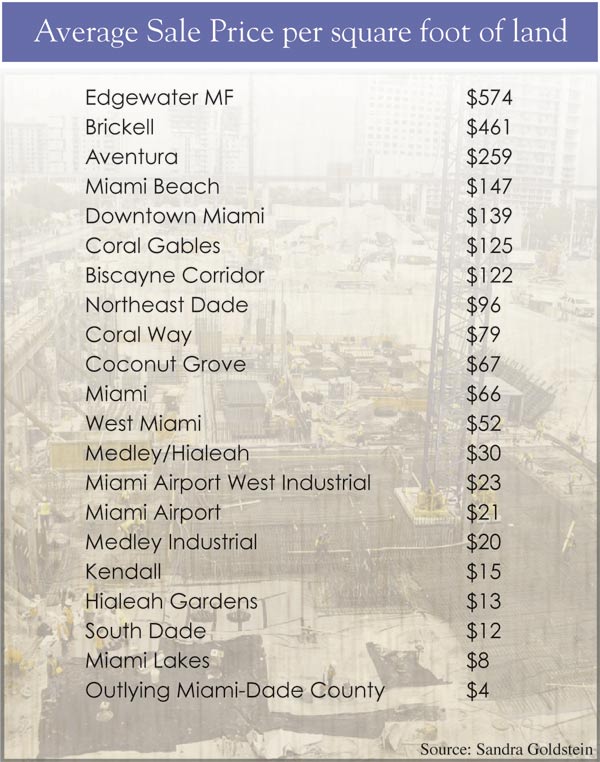 Industry specialists agree commercial land is selling at a robust pace compared with four or five years ago now that investors have more confidence and are seeing the benefits of an improving economy.

An analysis of 537 land sales over the past two years and an average price per square foot on each area of the county strongly indicates that the price of commercially zoned land has increased dramatically, said Sandra Goldstein, broker and owner of Sandra Goldstein & Associates.

“The average price per square foot of commercially zoned land in the last quarter was over $35 compare with less than $15 per square foot back in 2009,” she said. “The charts show demand is strongest in the downtown and central business districts.”

For example, Ms. Goldstein said, the average price of land that sold in the past two years in the Brickell area is $461 per square foot.

“The sales volume taken over the past five years indicates a growing strong demand for commercial land in Miami Dade,” Ms. Goldstein said. “Over $700 million worth of commercial land was sold last year compared with $150 million in 2010.”

Prices for commercially zoned land have increased throughout the county by about 20%, said Tom Dixon, president of Dixon Commercial Real Estate.

“People are now buying across the board,” he said. “There’s an attitude of wanting to move forward and not waiting on the sidelines anymore.”

“People look at the alternatives which are keeping their money in the bank [with virtually no interest] or investing in the stock and bond market [which may seem too risky], so the best investment is real estate, which appreciates over time,” he said.

Mr. Dixon and Ms. Goldstein agree that demand is high in Brickell and Wynwood. Ms. Goldstein added that the pricing of commercially zoned land over the past two years has also increased intensely in the infill areas of Miami-Dade County such as the Design District and Edgewater, where she said prices have risen by 30% to 60%.

“It has the biggest incremental value due to changes in zoning and, if the cycle is strong for residential, the demand for development becomes stronger,” he said.

The City of Miami has very flexible zoning, particularly in Brickell where developers can have mixed use, Mr. Lowell said. He said demand is also strong in Miami Beach or anywhere on the water, Lincoln Road for retail and Aventura for residential and retail.

Developers have a formula, he said: They work backwards looking at what they can sell per square foot, what the construction costs are including taxes and permits, and then determine if the price of land will make a viable project.

With the market changing so quickly, however, it’s hard to generalize about land prices, Mr. Lowell said.

“By and large, Miami-Dade County is seen as a stable platform and a smart bet,” she said. “On top of that, investors in the Asian markets are also finding us and see land as still relatively affordable.”

In addition, “success begets success” Ms. Goldstein said, pointing to Craig Robbins’ expansive project in the Design District, the continued expansion of Midtown, the Brickell City Centre that Swire is now building, the re-emergence as a powerful force of the Related Group, and several signature projects that are about to kick off by Tibor Hollo and Jeffrey Berkowitz in downtown Miami.

“Throw in the Beckham soccer project, Tommy Hilfiger buying the Raleigh hotel in South Beach, the Genting investment in the Omni CRA area, and record prices for retail space on Lincoln Road, all of this reinforces investor confidence and creates an urgency for those who have capital to invest and want tangible evidence of reasonable, if not above-market, returns,” she said.

“All developers are asking, ‘How long will this last?’” he said. “It takes a long time to build, so we won’t know exact numbers for two years” with delivery of several projects expected for 2015 and 2016.

“Our crystal ball is cloudy,” Mr. Lowell said. “Interest rates are among the lowest we’ve seen. When the rates go up, it will be harder to get a project forward.”