Advertisement
The Newspaper for the Future of Miami
Connect with us:
Front Page » Transportation » River mega-yacht marina unveiled 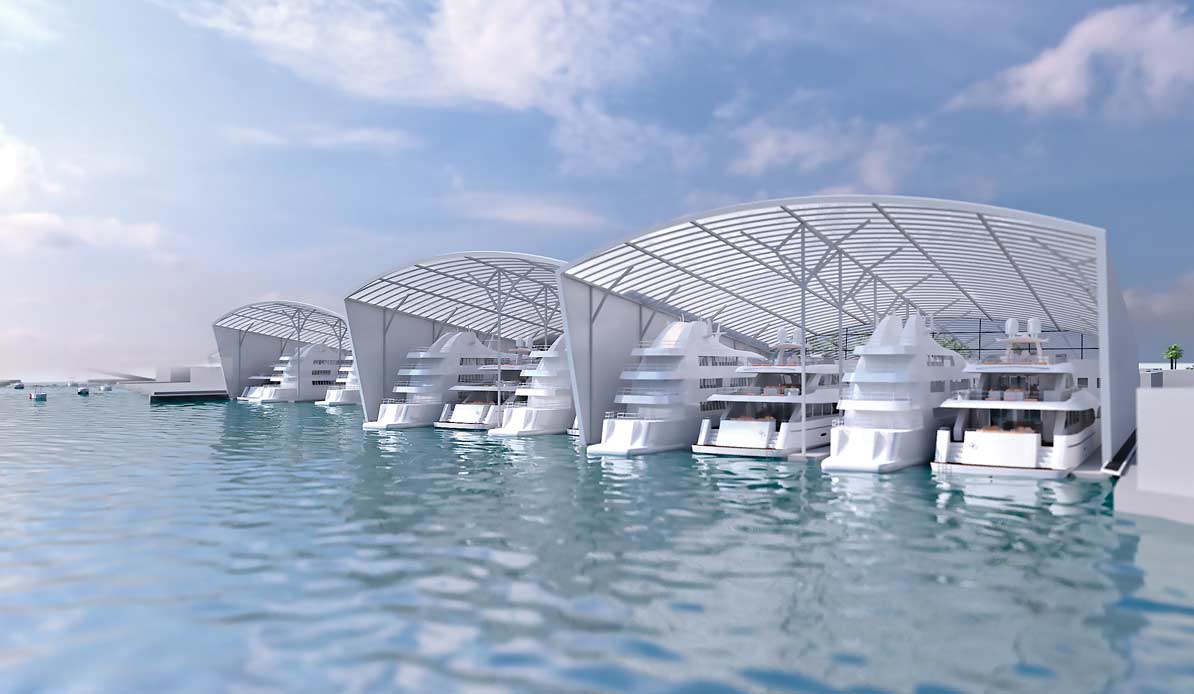 An age-worn marina on the Miami River would be reborn as an aquatic oasis for up to 16 mega-yachts as part of a development planned by property owner Homero Meruelo and his team of architects and engineers.

The committee recommended approval and found the plan consistent with the Miami River Greenway Action Plan and urban infill plan.

The project, called Miami Mega Yacht Marina, is to be considered by the full Miami River Commission on March 3.

It operates under the name of Brisas del Rio Marina, and is currently licensed for 45 slips.

The property used to be known as Florida Yacht Basin, and was identified by the original Miami River Corridor Urban Infill Plan as “an ideal location for a mega-yacht boatyard and mixed use site.”

The proposed project consists of a private marina for 16 mega-yachts approximately 200 feet in length. Each slip would be covered and would be provided with covered parking for three vehicles, indoor storage, and quarters for the captain and crew.

Each vessel would also be provided with covered storage for tenders, an owner’s vault for storage of valuables, as well as a flexible space that could house a repair shop, recreational space, and/or additional storage.

Amenities would also include a clubhouse with coffee shop, Internet Room, dining area, spa, exercise room, media room and swimming pool. A warehouse/office building would be built for marine-related businesses.

Services would include all those allowed by the Miami 21 Code, including vessel docking, repair and storage. No zoning changes or variances are required.

Mr. Murley said the proposed marina provides a “fine balance” of economic investment and jobs on the river.

“It’s the right thing for the river,” he said. “The concept is sound. This is the right land use… It’s a very important industry in the region.”

“There is such a shortage of yacht and mega-yacht slips in the area,” he said.

“I truly believe we have a product not seen in the US,” said Mr. Rodriguez-Tellaheche.

Typically, a captain and crew stay on a yacht or get motel rooms, according to Mr. Rodriguez-Tellaheche.

While maintenance is performed on the yachts, the captain and crew could relax in their own quarters at the marina or hang out in the private clubhouse, said Tomas Gonzalez, an engineer with HCD Developers.

Mr. Aguirre asked Susan Engle of Enviro Care, who is working with the developer, where ‘yacht’ ends and ‘mega-yacht’ begins.

Ms. Engle said it used to be that any vessel longer than 80 feet was considered a mega-yacht. “Now 200 [feet] is almost nothing,” she said, noting the mega-yachts are like mini-cruise ships and “they have no place to go because they’re so big.”

Mr. Meruelo said these mega-yachts would often be towed to and from the marina and don’t have frequent short trips such as the smaller boats docked there now.

The developer said the project will bring to the Miami River the very sought-after mega-yacht industry, which historically has gravitated towards Broward and Palm Beach counties.

The developer cited a report titled “Recent Growth, Current Activity, and Economic Impacts of Megayachts in South Florida,” updated in 2006, which said the mega-yacht industry had an economic impact of $732 million in 2006 on Miami-Dade, Broward and Palm Beach counties.

The 1,500 mega yachts (over 80 feet) present in the waters of Miami-Dade, Broward and Palm Beach counties at that time also helped create 7,366 full-time jobs.

Among the report findings: An estimated 1,500 mega-yachts were present in tri-county waters in 2006, compared to 800 during 1997. The yachts spent an estimated $219.8 million at boatyards, and generated $122 million in brokerage commissions and $30.6 million in charter industry commissions.

“The mega yacht-related direct impacts multiplied throughout the local economy to an estimated $732.2 million in total new economic output – a 27% increase in five years,” the report said.

Mr. Rodriguez-Tellaheche said the developers are now entering the construction documents phase and permitting, if they get support from the river commission.

“This will really revitalize the community,” Mr. Rodriguez-Tellaheche said.

The site is generally located across the river from Curtis Park.