Advertisement
The Newspaper for the Future of Miami
Connect with us:
Front Page » Government » Airport City visions fly on collision course 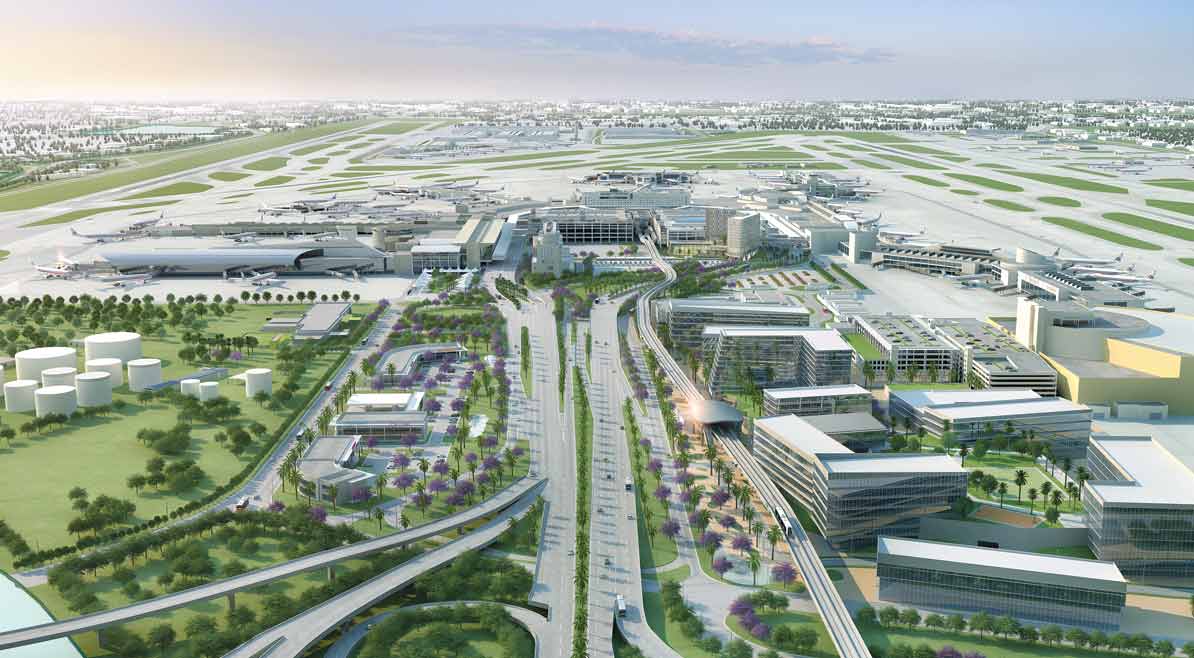 Two visions for Airport City, the mixed-use development planned for the entrance to Miami International Airport, are flying on a collision course piloted by county officials using different flight plans.

A committee Tuesday started out to ground the plan permanently and come up with a whole new process and concept for the site, but wound up voting to give the administration and airport director 60 days to decide whether to stick with plans that have been negotiated for five years, seek a new developer, develop only part of the original site or start over.

If those aren’t enough possibilities, another county committee this week is to vote on a conflicting proposal to stick with the original developer but develop less than a third of the original site or come back with a report within 90 days about why negotiations couldn’t be concluded.

Airport City has been in the planning nearly a decade, an attempt by the Miami-Dade Aviation Department to use fallow land at the airport to generate cash for the hundreds of millions of dollars that the airport must repay each year of principal and interest on bonds that were issued to rebuild much of the airport.

Generating cash is crucial, because the airport essentially flies on its own fuel: its earnings keep Miami International Airport going. It neither funds the rest of the county nor gets money from any taxes the county receives.

Airport City was to be built and financed by Odebrecht USA, the Coral Gables-based arm of Brazilian construction giant Odebrecht. But the firm has been dogged by concerns that its parent company was doing work in Cuba, an anathema in Miami.

Then last month Aviation Director Emilio Gonzalez, who took over from predecessor Jose Abreu, whose team negotiated a complex agreement with Odebrecht for a variety of developments that would make up Airport City, decided that of the 33.5 acres that would make up the development, the airport now needs to hold back all but 9.5 acres for possible future aviation use.

Mr. Moss’s proposal on the table for later this week would deal with just those remaining acres. But on Tuesday, everything and anything was on – and nearly off – the table.

The county’s Finance Committee dealt with a resolution sponsored by Esteban Bovo Jr. intended to reject all expressions of interest received for the land proposed for Airport City and ask Mayor Carlos Gimenez whether the county should move forward with any development there at all, detail what would be the best use of the site and report to the full commission within 60 days.

With amendments, that motion gave the administration a variety of options, from killing the plan to seeking new partners, from developing all the original site to just the part Mr. Gonzalez said the airport could spare.

The effort to move Odebrecht out of the pilot’s seat at Airport City brought a sharp rebuke from Mr. Moss, who said that after half a decade of negotiations as the chosen developer it was unfair and unwise for the county to say it now wants to look for new partners.

“I guess the question is, is this the way we’re going to do business in Miami-Dade County?” Mr. Moss asked. “I think this sends a bad message to the community, to those companies out in the community who have come forward time and time again to propose various projects in this community…”

After Mr. Gonzalez tried to take out of play the bulk of the development site, Mr. Moss said, “Odebrecht has agreed to work on those two parcels that are remaining, and I believe we should move forward in doing that.”

The county, Mr. Moss said, can’t keep having companies “go through the process, allowing them to be selected and then saying, ‘We changed out minds.”

Meanwhile, Juan Zapata, who was in the state legislature and not a commissioner during most of the process leading up to this week’s showdown, said he’s “getting scared about how long it takes for things to happen here, and if we threw everything out it would significantly delay the whole project.”

Later, Mr. Zapata questioned Aviation Department Chief Financial Officer Anne Syrcle Lee about the negotiations and learned that in the five years since the airport had decided to cut a deal with Odebrecht, one year had elapsed getting Federal Aviation Administration approval of what the company plans to do and four years were spent negotiating one by one separate leases for each of the pieces of the project – a process that was the choice of the county itself.

He also was told that if the county alters the plan or changes developers the Federal Aviation Administration approval process would most likely have to start all over again.

Mr. Zapata insisted, and the committee agreed in its 3-1 vote Tuesday, that in 60 days the administration should not merely report on a choice of actions among the menu the committee had put on the table but be prepared to “do it on a timely basis.”

As to who would be chosen to develop the project, Mr. Zapata said he was open to the best proposal that might surface in the next two months to replace Odebrecht, but “as we say in politics, the incumbent always has the upper hand.”

One Response to Airport City visions fly on collision course