Advertisement
The Newspaper for the Future of Miami
Connect with us:
Front Page » Education » Research complex links animals, wind and waves 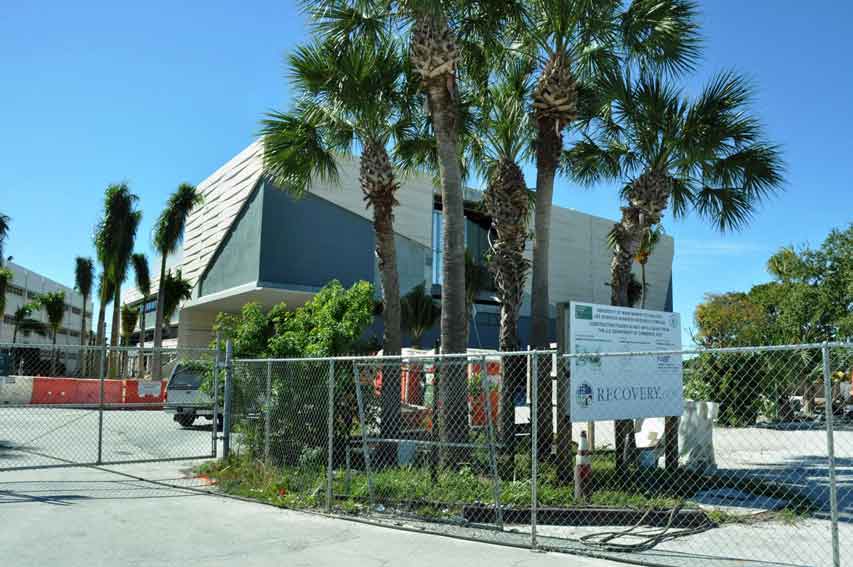 University of Miami’s new Rosenstiel School of Marine and Atmospheric Science complex is gearing up to open in March or April, and while a slew of students and staff are looking forward to the 86,000-square-foot, $47 million facility on Virginia Key, the truth is, it’s a little late.

About a half year late: the original completion date was September 2013.

But with a June 2012 groundbreaking, a two-year window of construction isn’t terrible, especially considering the size of the project.

“Our perspective is, hey, if we finish this by April, that’s six [or so months] later than we had hoped, but that initial hope was largely optimistic. We’ll be very happy to be done two years after ground breaking,” said Michael Schmale, professor of marine biology and fisheries.

While a half-year delay on what will end up being a two-year project may seem quite the extension to some, for Mr. Schmale it’s all relative. The new Marine and Atmospheric Science building is one of a kind and so complex that pushing the deadline makes sense if the building requires it.

“With a building like this, you really want to make sure that everything is right, that the materials are everything you want,” he said.

The new structure isn’t simply walls, doors and windows: it’s sea water intakes, holding tanks, complex salt water pumping and filtration systems, and a 40,000-gallon wave tank. “It’s very exciting to see the whole thing come together. The wind wave tank is so enormous… and you can walk under and through it,” Mr. Schmale said.

Eventually, the new building will help consolidate the offices and labs that were spread out in three separate buildings, helping to create a more efficient environment for professors, researchers and students. The building is planned in two parts, a marine and life sciences side, and a Wind Wave SUSTAIN facility, which will allow researchers to study the effects of, you guessed it, wind and waves.

“The marine and life sciences, which is two floors, has labs that are devoted to study live marine animals. Currently [they’re] spread out across campus, so you have animals in one building and research labs in another,” Mr. Schmale said.

The construction on Virginia Key, in addition to updating its facilities, is intended to open up the space on campus. Three buildings are coming down for the one that’s going up.

“This will allow us to break the space gridlock that we’ve had on this campus for many years,” Mr. Schmale said. “It’s very difficult to renovate areas of space because everything is occupied. When you build a new building, it gives you an opportunity to free up space and renovate and reposition people and do things in a better fashion.”

The Glassell Building, where Mr. Schmale’s office is currently until the new building opens, will be torn down and replaced with a specialized pool complete with an 18-foot deep end that will be used for scuba training classes. Currently, divers jockeying for a research diving certification have to go to a Coral Gables facility.