Advertisement
The Newspaper for the Future of Miami
Connect with us:
Front Page » Government » Engineers check cracks in courthouse columns 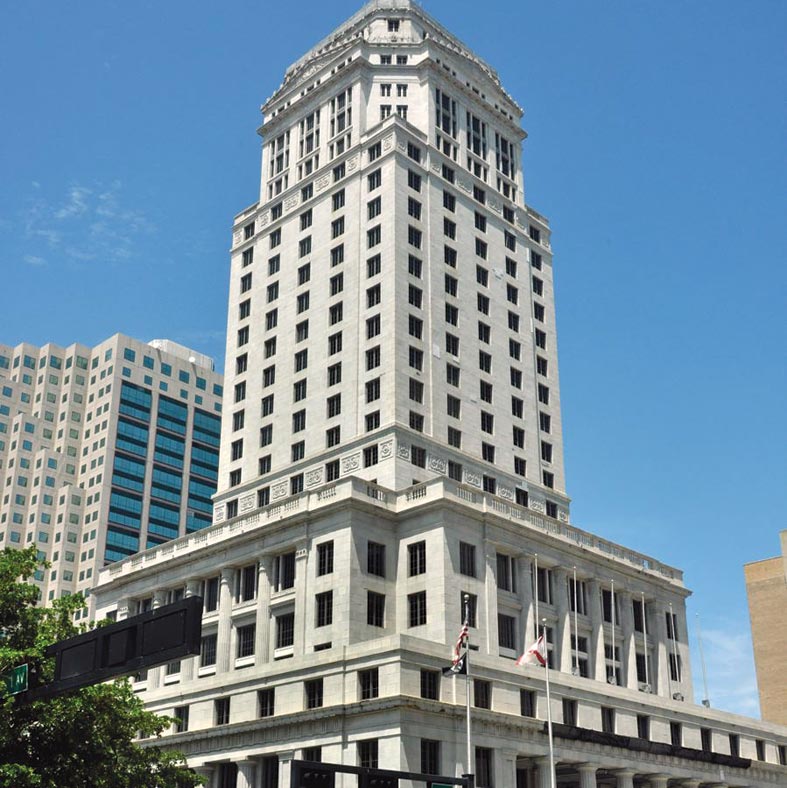 Despite cracks in basement columns, the Dade County Courthouse won’t be falling down any time soon as it undergoes 45 days of engineering tests.

Officials are keeping a close watch on a rehabilitation project for the building at 73 W Flagler St. so that it will serve for years to come.

The 11th Judicial Circuit Court of Florida asked the county to thoroughly investigate the condition of some basement supporting columns after personnel discovered potential problems.

“Our department is maintenance, and part of that [responsibility] is overseeing the courthouse,” she said this week. “We identified [the problem] by sight. As a result, we immediately hired an engineering firm for an assessment [to investigate] corrosion of the columns.”

The county’s Internal Services Department hired U.S. Structures Inc., which in turn subcontracted with G.M. Selby Inc. to conduct non-destructive testing for the columns. This testing evaluates a material or structure without causing damage to it, using such techniques as ultrasound, x-ray and remote visual inspection.

Now, G.M. Selby is conducting secondary testing to ensure engineers get to the root of what is causing the erosion and determine the degree to which repairs are needed.

This series of testing is of the destructive variety, which by contrast seeks to cause a structure to fail, using such techniques as stress tests, hardness tests and metallographic tests

“The Notice to Proceed with the destructive testing was issued on Jan. 21,” Ms. Singer said. It will take 45 days. “After [the testing period], we will have a recommendation and the structural engineering firm will issue a report.”

Ms. Singer doesn’t have information yet on how much it will cost to fix the support columns because the extent of the damage hasn’t been determined.

“First the destructive testing must be completed, followed by a recommendation for remediation of the columns,” she said. “Once the recommendation is received, a cost estimate will be prepared that is tailored specifically to the needed repairs.”

The courthouse basement is used for storage and minimal parking. Ms. Singer said. Office use is limited.

She stressed that there is no danger now for anyone one who uses the courthouse.

“The building continues to be safe for the public and employees,” Ms. Singer said. “The county’s structural engineering report states that there are no immediate concerns for current use and occupancy of the building.”

She said the engineering firm hasn’t yet provided recommendations or scenarios for how remedial work – and the consequences of various timeframes for it – might proceed going forward.

“[That information] is anticipated after the destructive testing process is completed and the report is prepared,” Ms. Singer said. “At the conclusion of the initial and subsequent assessment, as well as a careful review of the recommendations for remediation of the columns by the engineering consultant U.S. Structures Inc., a final report will be forwarded to the county. At that time, construction cost estimates will be developed and considered by the county.”

G.M. Selby’s 27-page report states the firm will work together with U.S. Structures to come up with suggestions for the required repairs.

To date, the engineers have examined 15 columns and were able to locate and identify such problems as plate damage, corroded metal plates and damaged rivets.

“Overall, most columns have mid- to severe damage up to 32 to 43 inches,” Mr. Zadikoff states in his report. “Some have damage in higher areas as well. Not all problems are encountered on every column.”

Before arriving at a full conclusion, Mr. Zadikoff advised that G.M. Selby will have to evaluate more columns.

“However, we believe that based on the emerging pattern, two areas of concern are the base of each column and the zone immediately below the floor which we have not been authorized to test,” he wrote. “In addition, we looked at the slab deck at two locations, at the lowest and its peak evaluation. The difference is remarkable with the lower level in immediate needs for repair at least at the single location we performed [non-destructive tests].”

Ms. Singer said the façade restoration investigation has been completed but the time schedule has been interrupted by the findings in the basement.

What the upcoming destructive testing and its results mean for day-to-day operations of the courthouse remain an open question.

The courthouse, which was built in 1925, was added to the US National Register of Historic Places in 1989.

Information related to structural testing at the courthouse, Miriam Singer at singer@miamidade.gov or Eunice Sigler, (305) 349-7189. Questions on the interim report on the columns, Gerald Zadikoff, (305) 666-5775.