Advertisement
The Newspaper for the Future of Miami
Connect with us:
Front Page » Transportation » Water Taxi Miami expands 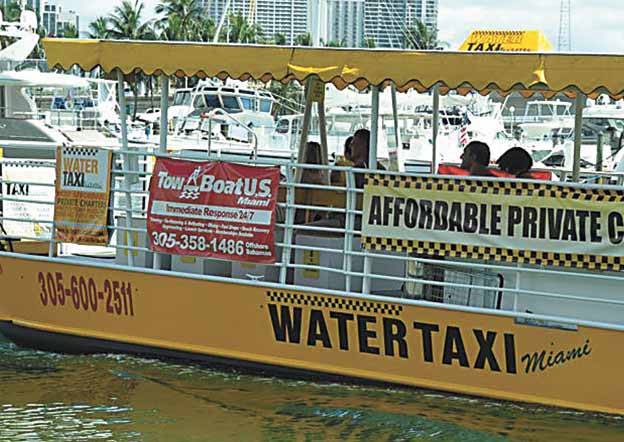 This month starts the second year of Water Taxi Miami, a taxi service started by manager Max Vlessing that, he said, continues to expand as it gains more passengers and interest.

Passenger pick-ups have increased in frequency, now making a stop every hour and a half instead of every two hours.

Water Taxi Miami has also added a new Xpress, on-call, service, which Mr. Vlessing said functions much like a regular taxi – except on water.

“I can pick you up and drop you off at different locations,” he said. “People love it. People love to be in a smaller boat with the captain,” especially, he said, one that goes from one destination to another much faster.

“And because we can go fast,” he said, “we can go to far-away places like Dinner Key Marina and the Fontainebleau Hotel.”

The express service, which began in mid-December, is still in the beginning stages, he said, and the Xpress boat holds only six passengers.

“We want to build it up,” Mr. Vlessing said. “I feel it will be a great extra service/benefit for Miami and Miami Beach to have a service like this.”

Round trip adult tickets for the Xpress service start at $25, according to the website, and it can pick passengers up from any waterfront dock, including especially Bayside Marketplace, the Omni Mall/Sea Isle Marina, Virginia Key, Downtown Miami, Finnegan’s on the River and Casablanca River Restaurant.

It also, he said, can go as far as Coconut Grove.

As for the regular taxi service, which does pick-ups from Bayside Marketplace, Miami Beach and now Bayfront Park, Mr. Vlessing said passengers still have access to two big boats – a 38-passenger boat and a 49-passenger boat.

Main pick-up stops for the regular service are at Bayside at the pavilion in front of Mambo Café next to Hard Rock; at Bayfront Park behind the big bus kiosk, and at Miami Beach Marina.

In the future, he said, it will also pick up passengers at Crandon Park Marina on Virginia Key and Grove Isle Marina.

Private charters are also available on any of the three boats, a service Mr. Vlessing said has also picked up, especially because of access to the smaller boat.

But, the service is trying to entice locals to use it more often by offering those with Florida ID a 50% discount each way from Monday to Thursday, Mr. Vlessing said.

Other things, Mr. Vlessing said, are in the works – but cannot yet be mentioned.