Advertisement
The Newspaper for the Future of Miami
Connect with us:
Front Page » Real Estate » 55-story riverside condo heads to OK 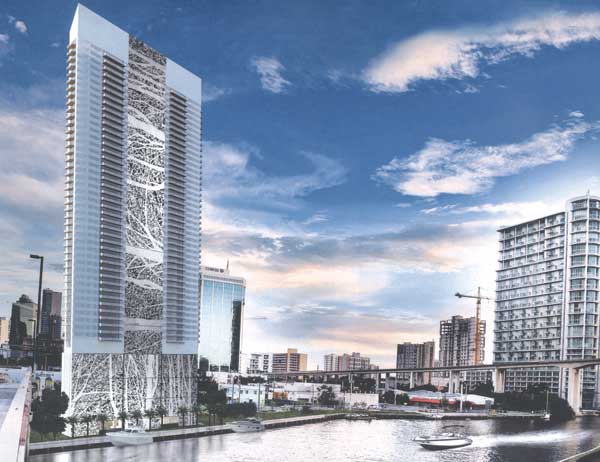 Edge, a towering sliver of residential units planned in an artistic structure along the Miami River, is one step closer to reality.

On Monday, the Miami River Commission recommended approval of the ambitious project, but the split vote comes with conditions.

Owner Rafael Aragonés was pleased with the approval and said he’s looking forward to taking his sleek high-rise plan to the city’s Urban Development Review Board meeting Jan. 22.

The developer has made concessions on the design, following recommendations from city officials.

“Since our last meeting, we’ve worked very hard” to make changes, Mr. Aragonés told the Miami River Commission, then turned over the presentation to his attorney Lucia Dougherty.

Ms. Dougherty immediately set out to illustrate the unique nature of this project, which calls for construction of a 55-story, 631-foot-tall, 130-unit residential development on a .34-acre site at 55 SW Miami Avenue Road.

The design team has incorporated a public riverwalk.

The developer and his team have worked with the city and moved the proposed building “as close to the [Miami Avenue] bridge as possible, to give the largest view corridor we can,” Ms. Dougherty told the commission.

She said the developer has agreed the riverwalk will be accessible to the public 24 hours a day, and signage around the site will draw attention to the riverwalk.

“You won’t see the cars,” said Mr. Revuelta. The outer surface will also incorporate an artistic element, he said.

“This is more like an art work with a building inside,” Mr. Revuelta said.

Not seeing all those cars “would be wonderful,” said Commission Chairman Horacio Stuart Aguirre, “especially with the artwork” design on the structure.

Commission member Gary Winston asked the owner whether it’s a challenge to get such a massive building on such tiny property, barely a third of an acre.

Mr. Aragonés acknowledged it’s “quite a challenge” but said it’s one that can be accomplished, particularly with the help of the structural engineer he’s working with.

Along with the proposed riverwalk, the site hugs a portion of a recently installed on-road Miami River Greenway. It’s how this project impacts the greenway that’s a major part of the conditional approval.

One city official said the existing greenway is being “modified to fit this” development.

That portion of the greenway was built using a $713,756 federal grant. If the development impacts the greenway design, the city might have to return some of those funds.

The conditional approval requires resolution of the greenway issue.

The second condition is that the developer remove planned landscaping elements that would cut 3 feet into an existing 8-foot-wide sidewalk.

The proposed, the 55-story development has met some opposition.

That opposition was reflected in the first vote Monday. A motion to recommend denial of the Edge project garnered affirmative votes from Sallye Jude, Dr. Martin and Patricia Harris. The motion failed on a vote of three yes, seven no.

Dr. Martin mentioned the project’s imposing size, and although “density is massively increasing” everywhere in the city, residential towers are being built along the river and “we plop down on the sides of the river the population of Coral Gables,” he said.

One role of river commission members is to represent the interests of the public, people who enjoy walking, jogging and biking along the river, Dr. Martin said.

The idea of the Miami River Greenway is to “share” the space, he said. “It serves as recreation.”

Even with concessions, the Edge plan would impact the design of the riverwalk and impact – or intrude on – the greenway, Dr. Martin said.

“In other cases we’ve decided to leave both intact,” he said.

The public will be poorly served “if the on-road greenway is interfered with,” Dr. Martin said.

After more debate, a second motion to recommend approval with the two conditions passed 7-3. The same dissenting commissioners cast the three no votes.

The proposed use isn’t consistent with historical uses along the river, Ms. Jude told commission members.

“The river is not even evident when you build to this height,” she said. “I believe it’s out of scale with this river.”