Advertisement
The Newspaper for the Future of Miami
Connect with us:
Front Page » Transportation » Bike-sharing stations to wheel into Miami

Bike-sharing stations to wheel into Miami 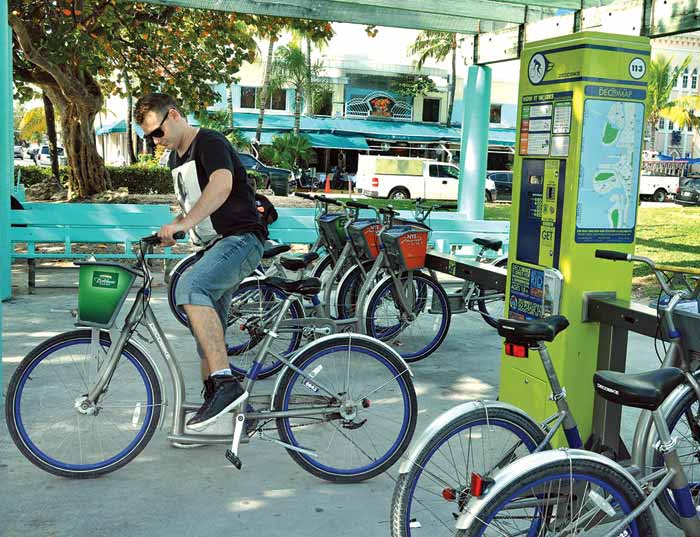 While DecoBike’s blue-and-green bike share stations are now familiar fixtures in Miami Beach, downtown Miami can expect the see stations popping up on its streets in 2014. The privately-funded bicycle sharing program DecoBike plans to launch in Miami sometime in the second quarter of the year, with about 70 new stations and 700 new bikes, said Marketing Director David Silverman.

The expansion will almost double DecoBike’s current Miami Beach fleet of 100 stations and about 1,000 bikes.

DecoBike arrived in Miami Beach in March 2011, and since then the company has reached more than 3 million rides. Unlike other bike-share programs, DecoBike is privately funded, and while auto drivers may disagree, the program operates at no cost to Miami-area taxpayers.

The model for bike-share programs is relatively simple: offer riders the option of a daily, monthly or annual membership for access to bicycles docked around the city at public stations. Riders then un-dock a bicycle and have 30 minutes to ride wherever they wish, with extra fees added for extended rides. To return a bike, all a rider has to do it re-dock it at any station. Maintenance and rebalancing of bicycle availability around the community is handled by the company itself.

The demand for an expansion is there. “People currently ride the bikes over into the downtown and Wynwood area to explore other parts of the city,” Mr. Silverman said. Soon, instead of having to bike across Biscayne Bay from Miami Beach and back again to return bicycles, riders will be able to dock bikes downtown.

“Overall, everything has been moving along very smoothly. The entire city is excited and waiting anxiously to have bikes on the other side of the bridge,” said Mr. Silverman.

By starting in Miami-Beach, DecoBike has already put itself at an advantage for a successful expansion into downtown.

“It’s a good example of how to grow a bike-share. [It] started where a bike-share would succeed, and now people grasp the concept of what a bike-share is,” said Colin Hughes, director of national policy and project evaluation at the Institute for Transportation and Development Policy, which just released a bike-share planning guide and ranking of bike-share programs around the world.

That familiarity will come in handy when DecoBike expands to the mainland, Mr. Hughes said, where people will already know what DecoBike is. However, the Miami Beach origin allowed DecoBike to target tourists, who might have been willing to spend more on a daily or weekly membership.

“From the location, its aim seems more towards tourism. It’s more expensive than any of the more urban [bike shares], like in DC or New York,” Mr. Hughes said.

When compared to the cost of annual membership in cities like New York or Washington, DC, at $95 and $75, respectively, a 12-month membership with DecoBike at its current rate of $150 is relatively expensive. For the expansion, Mr. Hughes said, DecoBike will have to address the cost if it wants to appeal to residents and offer a cost-effective alternative to public transit or cars.

4 Responses to Bike-sharing stations to wheel into Miami