Advertisement
The Newspaper for the Future of Miami
Connect with us:
Front Page » Transportation » Unprecedented access to buoy PortMiami 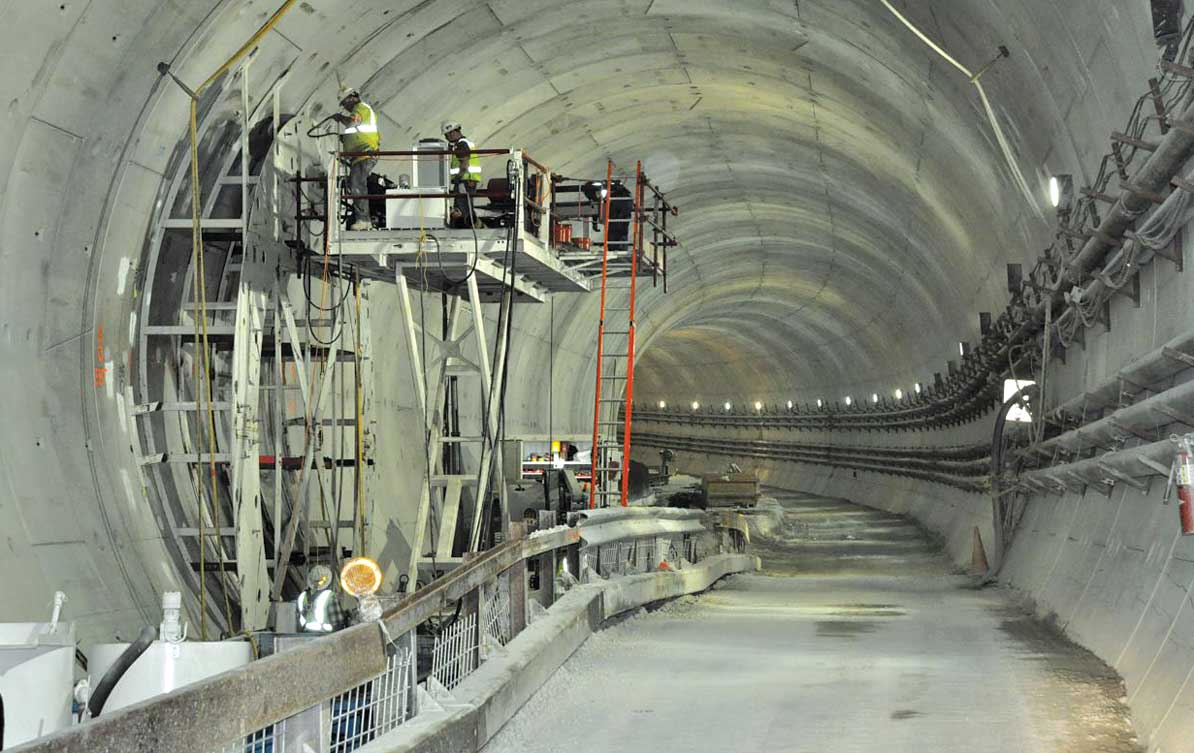 Port Miami will be the only major US seaport to have a non-stop road link to an interstate highway when the $1 billion-plus twin tunnel project is completed in May, a project official said this week.

“It will be the only port in the US where cars and trucks can go from a major highway into the port without [encountering] traffic lights,” said Chris Hodgkins, vice president for MAT Concessionaire LLC, the project’s contractor, also known as Miami Access Tunnel.

Port officials expect that the unprecedented access will give Miami another advantage over other seaports in the South in attracting more cargo, which has been shown to have a greater impact on regional economies than cruise ships – the other major business of seaports.

Still, the tunnel system under a section of Biscayne Bay known as Government Cut also will be a convenience for cruise-related road traffic, Mr. Hodgkins said.

Downtown Miami may see the most noticeable impact once the tunnels open, taking an estimated 1.5 million trucks a year off downtown streets, Mr. Hodgkins said. The only access point to the port for traffic has been the port’s entrance road near American Airlines Arena off Biscayne Boulevard.

The boring and main construction of the tunnels was completed this year. Currently, workers are putting in the concrete base for the tunnel roads, which will be topped with asphalt. Now and in coming months, workers also will be putting in other final touches – such as electrical conduits, operational control systems and a fire safety system, Mr. Hodgkins said.

“The devil is in the details,” he added.

The tunnel systems will include two 50-ton metal gates that can seal the tunnels at both ends in the event of a hurricane or other threats.

“If you were to go into the tunnels now, you’d see they’re packed with workers and equipment,” he said.

When the tunnels open, cars and trucks will be able to go from Interstate 95, head east for a short distance on Interstate 395, which then turns into the MacArthur Causeway to South Beach.

Once reaching Watson Island on the causeway, traffic will be able to divert into the tunnels with separate lanes for cars and trucks, Mr. Hodgkins said. Traffic will travel under Government Cut – the part of the port where cruise ships dock – and emerge inside the port. There will be one tunnel to enter the port and another to exit via the same route.

The project’s original construction cost was set at $643 million, but about another $60 million was spent to solidify the ground around the tunnels with grout to provide a more supportive structure for the boring and to ensure the tunnels remain water-tight, Mr. Hodgkins said. The extra money was taken from a contingency fund set up for additional costs that came up during construction.

“After the cruise ships would go out, we’d deploy five barges on Government Cut” as part of the grout process, he said.

In addition to roughly $700 million for construction, MAT Concessionaire is to receive $350 million upon successful completion of the project. The project is a public-private partnership among MAT, the Florida Department of Transportation, Miami-Dade County (the port’s owner), and the City of Miami.

“The Port of Miami Tunnel is a first in the US – a technically challenging transport construction project implemented through a public-private partnership where no tolls are charged,” Jeffrey Parker, an advisor on the project for the Florida Department of Transportation, wrote in the Public Works Financing newsletter.

The project introduced new tunnel boring technology to the US.

“Rather than 21-foot standard tunnels,” Mr. Parker explained, “Port of Miami Tunnel’s large-diameter [drilling] machine will permit highway lanes, or double-track [road] in a single, bored tunnel. These benefits have long been realized in European and Asian transport construction, and now the US is poised to start catching up.”

“Over the following 30-plus years,” Mr. Parker wrote, “availability payments will be subject to deduction if there are unplanned lane closures or deficiencies in providing a safe, well-maintained facility, with higher deductions during peak periods.”

To ensure the tunnels run smoothly, MAT will station high-powered tow trucks at both ends of the tunnel, ready to be deployed 24 hours a day, Mr. Hodgkins said.

In addition to the tunnels helping create more jobs in the future, the design and construction itself was a big job creator. Overall, about 7,000 people have worked on the project, including about 900 employed directly by MAT, with the majority employed by subcontractors. About 82% of the tunnel workers have come from the Miami area, Mr. Hodgkins said.

“The biggest thing,” he added, “is we’re on time and on budget.”