Advertisement
The Newspaper for the Future of Miami
Connect with us:
Front Page » Top Stories » Only 1,000 Orange Bowl tickets remain 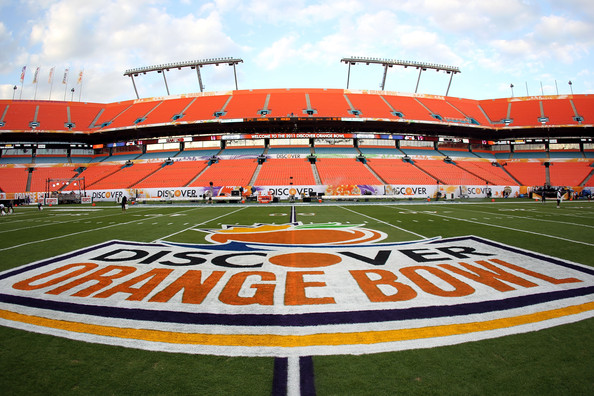 “We have had a really nice college football season and a lot of people are excited that our game dates are better this year [than last]. It’s Friday night and it’ll be the holiday weekend,” said Dawson Hughes, vice president of ticket sales and operations at the Orange Bowl Committee. Last year’s Tuesday game on New Year’s Day just didn’t spark the type of sales that the committee is seeing now.

“From a ticket standpoint, the goal from our end is that the tickets are sold out [before teams get their tickets]. That hasn’t been the case, but this year we’ve gotten very close, we’re down to about 1,000 available seats,” Mr. Hughes said.

“We’re in good shape relative to the last few Orange Bowls and we’re well ahead of the pace that we forecasted and well ahead of where we’ve been recently,” he said.

Attendance at last year’s game was about 72,000 – 4,000 short of the stadium’s approximately 76,000 capacity. To boost tickets sales, the committee has spent the last couple of years building out its sales department. And deepening the roster has helped – compared to previous years where ticket renewal rates were around 30%, this year they’re over 60%, Mr. Hughes said.

Undoubtedly, Ohio State’s fan base will help ticket sales. “Both Clemson and Ohio State have a bunch of local fans, and we’ve been watching the sales over the last couple days. It’s been an even mix of South Florida locals and people from across the country,” Mr. Hughes said Monday.

The teams will split 35,000 tickets to sell themselves. Because South Carolina’s Clemson is relatively close to Miami and Ohio State has a big fan base spread across the country, the committee expects the game to be packed.

Viewers at home can watch on ESPN, or live stream on ESPN3.com.

One Response to Only 1,000 Orange Bowl tickets remain