Advertisement
The Newspaper for the Future of Miami
Connect with us:
Front Page » Real Estate » Residential prices soar 19% in year – too fast? 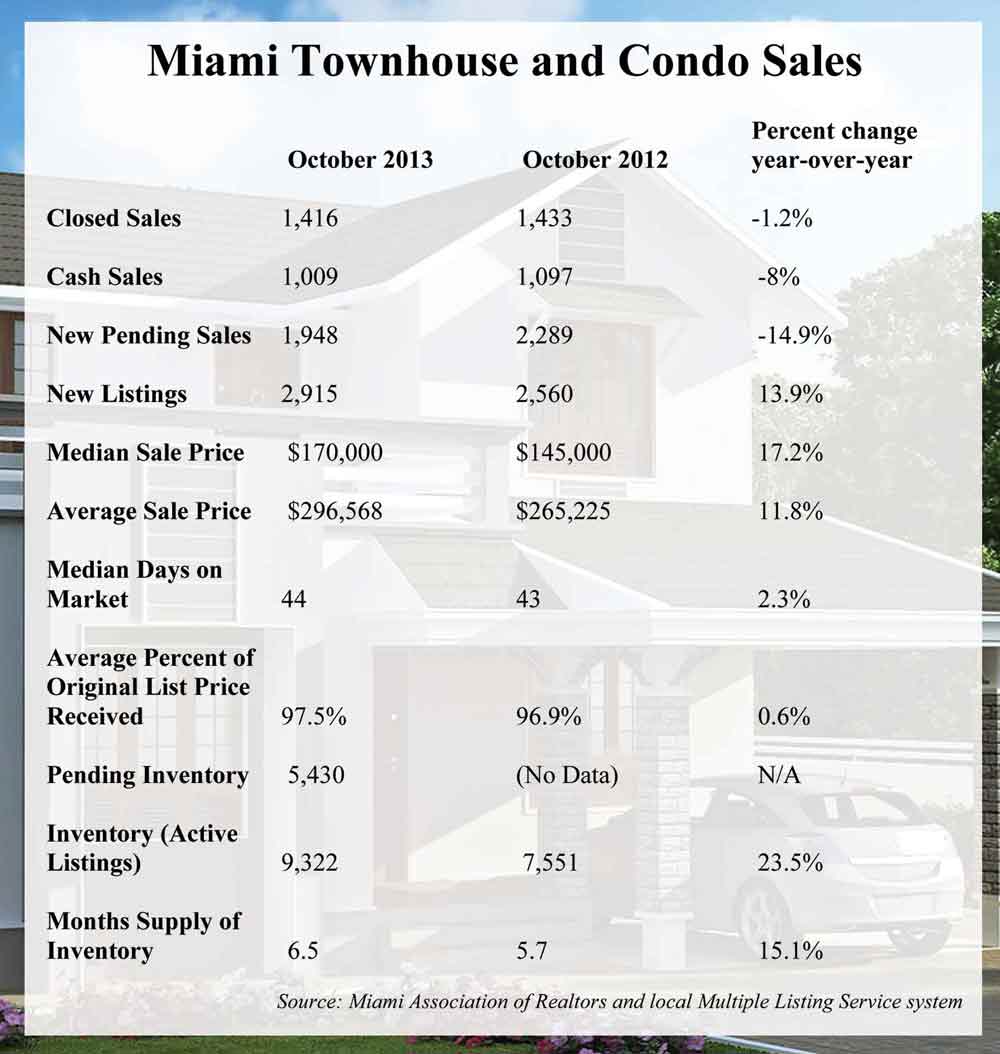 There are no signs of a slowdown in the real estate sector, with prices climbing almost 19% in the last year.

For nearly two years now home prices have trended upward, and in October they continued their two-digit increases, the Miami Association of Realtors and local Multiple Listing Service system reported.

“The 23 consecutive months of appreciation of Miami home and condo prices is a remarkable sign of the vitality and strength of South Florida’s real estate market,” said Natascha Tello, Miami Association of Realtors 2013 chairman of the board. “Rising home and condo values is a reflection of increased demand from international buyers from around the world, creating a great opportunity for sellers.”

But some market watchers are questioning the pace.

Among them is Howard Levine, senior vice president of residential lending at Sabadell United Bank, who called the “rapid appreciation in value” an “unsustainable incremental increase in pricing.”

“As a lender we’re a little worried about that,” he said during a Nov. 15 panel discussion at the Coral Gables Chamber of Commerce’s 2013 Residential Real Estate Outlook luncheon.

“Single-digit appreciation is what we all want to see in our market,” Ms. Tello said during that panel discussion, moderated by Miami Today Publisher Michael Lewis.

Large increases won’t appeal to buyers and over time they’ll hurt the overall market, too, she said.

But industry sources agree the current jumps in business are the result of pent-up demand that built during the economic downturn, as cautious buyers waited for the market to improve.

And now that buyers are in the market again, not only are prices rising, but volume also increased, with sales growing by double digits in the past year. And most of these deals were for traditional sales, not foreclosures or short sales, the real estate association reported.

Of the 1,060 single-family houses sold in October, 641 of them, or 60.5%, were traditional sales. That’s a 13.5% increase. At the same time last year, traditional sales accounted for less than half of the numbers. This year, short sales dropped more than 35%.

Condo sales were similarly promising. Of the 1,416 condo sales in Miami-Dade during October, 889, or 62.8%, were traditional sales, an increase of nearly 8 percentage points compared to the same period during 2012. Short sales accounted 13.1% of total sales – a steep decline from the previous year when 353 short sales accounted for 24.6% of all condo sales.

“The double-digit growth in traditional real estate sales is a sign of continued strength in Miami’s real estate market,” said Fernando I. Martinez, 2013 Miami Association of Realtors residential president. “Moreover, the significant growth in cash sales shows that Miami is the destination of choice for international buyers, who continue to play a major role in the local market.”