Advertisement
The Newspaper for the Future of Miami
Connect with us:
Front Page » Business & Finance » Mayor questions convention center hotel 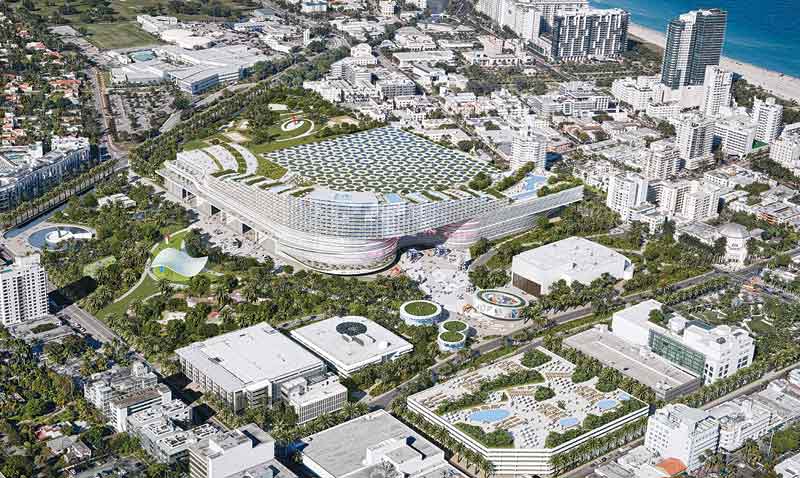 South Beach ACE might face new terms if it moves forward as developer of the massive project tied to Miami Beach’s convention center.

Incoming Mayor Philip Levine is reluctant to give land to the developer, which the outgoing city commission chose for the $1.1 billion project.

Under the current plan, South Beach ACE would lease land from the city for several parts of the project, including the hotel. For that portion, for example, it would pay the greater of 4% of the hotel’s gross revenues or fixed payments of $1.5 million the first year of operation, $3 million the second year, $3.5 million for the next eight years and $4.5 million until the 20th year, with lease payments increasing 10% every decade.

It would also lease retail space in the city-owned 17th Street garage for 25% of gross revenues or a fixed annual payment of $65 per square foot (upon opening in 2018), increasing 10% every 10 years – whichever was greater.

The arrangement would be similar for retail space north of 17th Street, except the fixed payment rate would drop to $30 per square foot to equal $600,000 in the first year open.

But the new mayor is reluctant to give land to the developer, and says the county has a $500 million pot that could pay for a smaller project without the hotel.

“I’m not of the belief that we should transfer our land to anybody…,” he said. “We have enough money to renovate our convention center. Why are we giving away our land? I believe that we have to look for a way to get the job done fast and efficiently, retain our ownership, decouple the hotel and build one heck of a park.”

She has not had a chance to review South Beach ACE’s full proposal, she says, but conversations with voters on the campaign trail indicate residents want the hotel away from the convention center – perhaps at the site of the current garage on 17th Street.

She also wants to see a plan to encourage convention center users to walk to and patronize surrounding businesses; a study on flood mitigation and sea-level rise; and an independent traffic study and comprehensive plan.

“If we’re putting so many hundreds of millions of dollars into the convention center we need to ensure it’s protected…,” she said. “It has to be very carefully thought out and planned.”

Voters seem to want an improved convention center and hotel, she said.

“We’ll certainly negotiate with Tishman. They’re the one the [previous] commission has picked,” she said. “I just think [the project] needs to be scaled down.”

Daniel Tishman, vice chairman of Tishman Realty Corp. and Tishman Hotel Corp., declined comment, and his public relations firm would not say whether South Beach ACE was considering a suit if the city reconsiders the project.

“Tishman is a great group. This is a world-class builder/developer. But what it comes down to is getting what’s right for the people of Miami Beach, not overburdening us with debt” and heavy traffic, Mr. Levine said. “I hope the path forward includes the Tishman Group, but I think that would be more up to them.”

Until meetings are held with staff, residents and the City Commission, he said, it’s also too early to say if the deal with South Beach ACE would change.

The proposed project could be on the agenda when the revamped commission meets Dec. 11, city spokeswoman Nannette Rodriguez said.