Advertisement
The Newspaper for the Future of Miami
Connect with us:
Front Page » Communities » Unsafe alleys turning to bonanzas 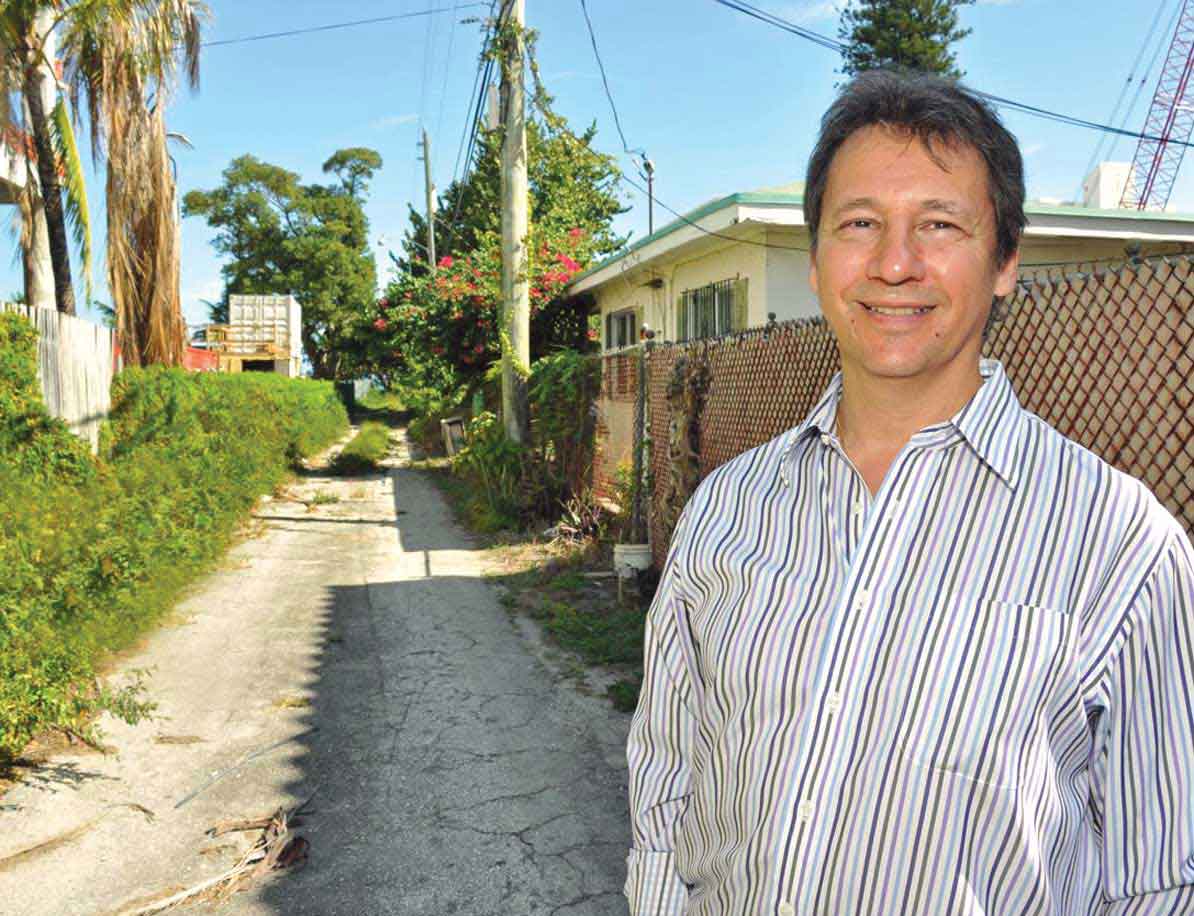 Fernando Levy Hara has never walked the full length of the alleys near his planned 19-story Crimson high-rise.

Even when his company, mckafka Development Group, was planning a community park, neighbors made it clear the Edgewater area was not safe. The park would attract drug dealers and prostitutes at night, they said, so mckafka relented, with opening hours to run from sunrise to sunset.

But that still left the alleyways behind the houses where neighbors said shadowy characters lurked at night, and where guard dogs made their presence known behind chain-link fences.

“One of the main complaints from neighbors was there was an alley,” said Mr. Hara. “They were very worried about crime. At night the lights are not too good in the street. It is the reason they want these alleys to be closed. From the beginning they were very concerned about the safety of the area. The first thing we did was put a fence around the [Crimson] property.”

What they wanted from the developer looking to build residences, penthouses and townhouses priced at $450 per square foot in the Edgewater neighborhood was a deal that would eliminate their security problems.

So mckafka and the community negotiated a quid pro quo: To gain residents’ support, the developer gave $45,000 to the 27th Street neighborhood for infrastructure improvements including replotting the area to add the alleys to homeowners’ parcels. The money will cover legal fees, surveyors, documentation, civil engineers, hearings and other related costs. It will also install a new drainage system, lighting and other security.

“Of course they will have an economic benefit because now they will also incorporate six to eight feet to their properties,” Mr. Hara said. “Two years ago it was worth nothing, but now there are seven or eight projects in the Edgewater area, the price of that land is between $100 to $150 per square foot.”

And for property owners with land spanning from 27th to 28th streets, replotting the alleys would be doubly beneficial as they’ll gain land on both sides of each parcel.

The change, the developers at mckafka say, is a personal bonus for homeowners and an overall benefit for the community.

“But we’re selfish too,” Mr. Hara said. “If the community is perceived as a dangerous place, our project will not succeed.”

It won’t succeed either if the stench or debris that washes over the waterfront during low tide continues unabated, so mckafka Development Group also needed to broaden the scope of its investment in the community. The group put a net in the mouth of the inlet to catch trash and keep it from reaching the waterfront.

“We are doing business, we want to make money,” Mr. Hara said. “But I’m an architect and an urban planner. I want to make better cities. In 40 years we’ll be gone, but what we build will be here. I’m producing something that will have an impact for 50 years in the community.”

The Crimson’s target market is young professionals who work in downtown or Brickell and want to live in the emerging artsy Edgewater neighborhood.

The Crimson, at Northeast 27th Street and Biscayne Boulevard, is to feature one-, two- and three-bedroom condominiums with 780 to1,600 square feet. The building will offer six penthouses with an outdoor terrace and private hot tub; an eighth floor pool deck, a landscaped promenade sundeck, hot tub, outdoor/indoor mini-theatre, cybercafé, lounge, business center, gym and spa.

“We want to be on good terms with the neighbors,” Mr. Hara said. “Always if you can benefit them with something, it’s a win-win situation for both.”

Edgewater’s and mckafka Development Group’s relationship is the latest example of private-public connection, as developers work to improve the neighborhoods around their projects.

But when Aria took over the site, the building was in foreclosure. Its tenants will include families earning 80% of the area’s median income. The building will also house a hospitality training center to provide vocational training for residents and locals.

“This project has been a win-win for the community and it has been met with tremendous demand,” said Syrie Ortiz, vice president at Professional Management Inc., which manages the building. “Vista 12 meets the need for high-quality affordable housing close to the workplaces of Brickell and Jackson Memorial Health District.”

Such investments and partnerships are also the result of developers venturing into neighborhoods that some see as the last bastions as other regions become increasingly crowded.

“It’s the logical place where Miami is developing,” Mr. Hara said. “Downtown is taken. To the south you have Brickell – there’s nothing left. To the west, nobody wants the west.”