Advertisement
The Newspaper for the Future of Miami
Connect with us:
Front Page » Education » University of Miami plans more campus construction 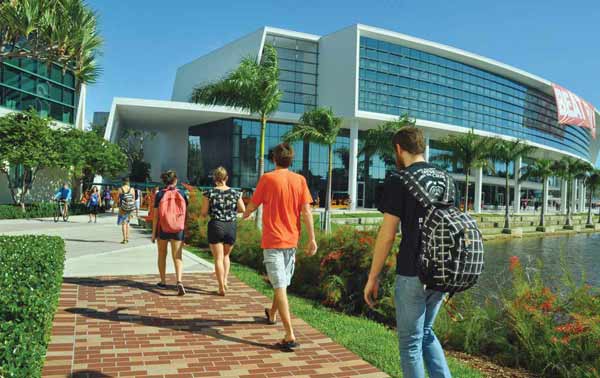 Those who haven’t been through University of Miami’s 239-acre campus in Coral Gables this year may notice several big improvements to the surroundings.

The university has just completed several major capital improvement projects that included a new Student Activities Center, additions to the Cox Science Building, an addition to the Hecht Athletic Center, a new campus entrance off Miller Road, and the restoration of the university’s first administrative building.

And there’s more on the way: The university recently started construction of two new wings to its Frost School of Music and is making outdoor facility improvements at the Whitten University Center.

For the future, the university has started planning to eventually open its first healthcare center on campus, and a study is underway to determine what new and improved student housing may be needed. Those projects are probably several years away.

It’s all about providing a better environment to attract and retain students, said Janet Gavarrete, the university’s associate vice president for campus planning and development.

“We just finished a cycle of improvements,” Ms. Gavarrete said. “But we’re always in upgrade mode.”

She said the “big news” this semester on campus, in terms of construction projects, has been the new Student Activities Center. Although the Office of Planning and Development doesn’t disclose dollar figures, the project reportedly cost $46.5 million.

“It’s really the heartbeat for student organizations,” she said, referring to the three-floor, nearly 120,000-square-foot facility that opened in August.

There was no centralized student activities center before. The new building houses offices for student organizations, with lounges and meeting rooms. It also is home to The Miami Hurricane, a student newspaper; a rebuilt Rathskeller, an eatery that serves beer; retail space; with a network of TV screens through the facility; and more.

Located near the Whitten University Center and the Gusman Concert Hall, the project was funded by a donation and from student activity fees, according to Ms. Gavarrete.

Also completed last summer was a 36,000-square-foot annex to the Cox Science Building. The project received a $15 million stimulus grant from the federal National Institutes of Health.

“This was an enhancement to our science program,” she added.

It includes locker rooms and player lounges, she said, and was built with the idea of making a stellar impression on visiting football recruits, prospects, and their families.

“We’ve been very busy getting a lot of stuff opened for this school year,” she added.

The university recently completed the renovation of its Toppel Career Center, which provides job placement and related services to students. “Top companies can go there for recruitment,” she said. “For students, it can be a key to placing them in top jobs in the market.”

Also completed this year was a new entrance road to the campus off Miller Road. The project involved upgrading about 20 acres of what was mostly a barren parking lot – and installing new parking, lighting, pedestrian paths, and keeping with the “tropical garden” landscaping of the campus

“Before, it had a backdoor feel,” Ms. Gavarrete said about the prior entrance road and its immediate surroundings. “The quality of work [on the new entrance area] is just amazing.”

In addition, the university recently restored its first administrative building – a wooden structure that’s been part of the school since the 1940s, she said.

The 27,000-square-foot building was restored to preserve its original style. It will be used by the College of Arts & Sciences.

“For years,” she added, “we didn’t use the building because it was in bad shape.”

A project that recently started was construction of The Center for Experiential Music, which will be part of the university’s Frost School of Music. When completed, the three-floor, 41,000-square-foot facility will expand the school with two new wings with acoustical studios, practice rooms, offices and support space, she said.

Meanwhile, Ms. Gavarrete said, the university plans to build an “ambulatory care center” or similar facility on campus to deliver healthcare to students, as well as to the public. It would be a UHealth center, she added, and might feature sports medicine and other services.

It would be the first facility of its kind on the Coral Gables campus, which is separate from the university’s Miller School of Medicine in Miami.

“It will be a major project,” she said, but added it could be two years or more before the project starts.

The university is also studying what should be done to improve student housing for the future, including dormitories. The study’s outcome could be new construction and improvements to existing housing.

The university has about 14,000 students, including about 10,000 undergraduates.

“We need to assess the current housing stock,” Ms. Gavarrete said, “and see what might be needed to stay competitive.”