Advertisement
The Newspaper for the Future of Miami
Connect with us:
Front Page » Government » Bridge repairs $68 million, counting interest 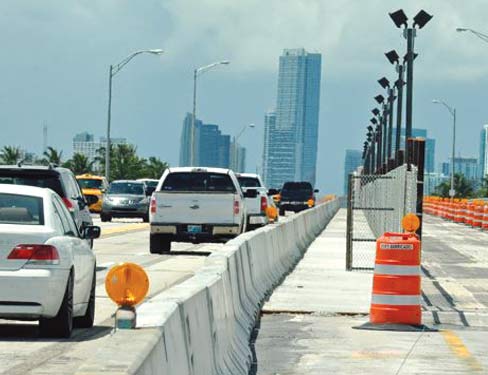 County issuance of up to $34 million in bonds for Rickenbacker Causeway improvements is going to cost nearly twice that amount.

On Oct. 22, commissioners adopted on first reading a resolution to issue up to $34 million to cover bridge repairs and reconstruction on the causeway.

But with interest, repayment will be about $2.2 million per year for the next 30 years, said Frank Hinton, director of bond administration in Miami-Dade’s finance department.

The total projected cost will be about $65.25 million based on market rates in September, when staff made the latest estimates.

Rickenbacker Causeway runs across Biscayne Bay connecting the mainland to the barrier islands of Virginia Key and Key Biscayne. It consists of about 1.2 miles of bridges – with the West, William Powell and Bear Cut bridges – and about 2.4 miles of roadway. It has operated as a toll road since 1947.

After state inspections in January indicated potentially failing load-bearing conditions on the original portions of Bear Cut and West bridges, which date to around 1944, commissioners moved to fund repairs. The plan for funding included a combination of toll revenue and financing proceeds backed by toll revenue, according to county documents.

The work will cost just less than $33.38 million, of which about $30 million will come from bonds and about $3 million from the Miami-Dade Water & Sewer Department.

A net revenue pledge will secure the bond. It includes revenue left over from tolls and concession fees after paying expenses, such as maintenance and repairs.

‘That’s a pretty standard pledge from a self-supporting bond,” said Jay H. Abrams, chief municipal credit analyst with FMS Bonds Inc. “They’ll pay the operating expenses of the bridge out of the tolls coming in, and the debt services pledge will be paid from what’s remaining. It does not appear at this time that the county is putting any type of credit behind it.”

But the county did seem to make a backup guarantee allowance with the “repayment” language in the legislative document describing the bond, permitting the use of other sources of revenue allowed by ordinance.

“It left the door open a crack,” Mr. Abrams said.

A hearing on the bonding is scheduled Dec. 3 before the county commission.