Advertisement
The Newspaper for the Future of Miami
Connect with us:
Front Page » Government » Rail historian sees streetcars returning 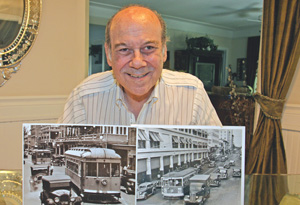 The man who wrote the books on the area’s transit history is adding his voice to conversations about its future.

It’s a proposal he first presented in a newspaper article in 1978, a few years after he was president of the Miami Beach district of the Metro Dade Transit Improvement Program, to help bring rapid transit to the county.

“This nonsense about not having overhead wire is ridiculous. It would not be anything but a tourist attraction,” he said. “If we had kept it we would have had one of the greatest tourist attractions in America, akin to San Francisco’s cable cars. But even then our civic leaders were myopic and shortsighted.”

Miami-Dade’s Metropolitan Planning Organization is conducting a nine-month, $325,000 study to create a rail corridor to connect Miami to Miami Beach. This is the second attempt. After a study in 2004, the project didn’t reach the engineering stage because of concerns about technology, funding and other issues, Miami Today reported. But leaders agreed that rapid transit between the two cities was vital, and revived the idea.

Speaking at a Greater Miami Chamber of Commerce event last week, government officials, transportation planners and civic leaders all seemed to agree on the need for a rapid transit system to connect the cities.

“I have been doing this longer than anybody on earth,” he said. “Let me assure you I can back up all the hot air.”