Advertisement
The Newspaper for the Future of Miami
Connect with us:
Front Page » Communities » County putting tennis center in center court 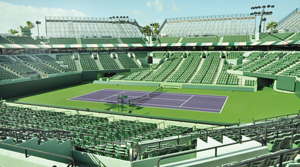 Miami-Dade County commissioners are expected to make some big decisions next month on the controversial plan to renovate the Crandon Park Tennis Center on Key Biscayne.

The plan by the promoters of the Sony Open pro tennis tournament, held annually at the Crandon Park Tennis Center, already has stirred up a lawsuit and a petition to stop the project.

Now commissioners are scheduled to have a public hearing on the plan during their Nov. 5 meeting.

Sources familiar with the matter said commissioners will consider the construction plan itself, a related proposal to change the park’s master plan, and one or more new contractual agreements between the county and the promoters. After a public comment period, commissioners could vote to approve the items.

The general purpose of the proposals is to formalize the proposed new construction at the tennis center and give the promoters greater control over the site, according to sources, who spoke on the condition of anonymity.

Meanwhile, a lawsuit to stop the project by Bruce Matheson – who negotiated the master plan with the county some 20 years ago and sits on a committee that enforces it – has been put on hold until after the hearing.

Eugene Stearns, a lawyer for International Players Championship Inc., the promoters, said his clients are prepared to state their case at the Nov. 5 hearing.

“An important part of the arrangement is the existence of a master plan and the means to change it,” Mr. Stearns said. “The county is bound to defend it. We are bound to oppose it.

“If the master plan and Matheson’s power to control it is legal,” he added, “Crandon Park is a fiefdom for one man who, in the guise of enforcing a public parks limitation, exercises the power to decide what kind of park he wants.”

Mr. Stearns has said the plan involves eliminating the clay and grass courts at the tennis center and constructing three new permanent facilities for spectators to watch the tournament, among other changes.

“They want to control the tennis center site year-round,” he said.

A Miami-Dade Circuit Court judge postponed an Oct. 17 hearing on Mr. Matheson’s lawsuit in which he had asked the court for a summary judgment. The hearing is expected to be rescheduled after commissioners act on the tennis center plans.

Mr. Matheson said his main contention is that a referendum on the tennis center project that was approved by voters in last November’s election was vague and misleading and should be voided because voters could not make an informed choice. Mr. Matheson’s relatives donated land to the county about 70 years ago that became Crandon Park.

The promoters have stood behind the referendum, and suggested that about $50 million in proposed improvements and expansion of the tennis center could be funded through the sale of county bonds backed by the tournament’s revenues.

In opposition to the plan, a group named The Save Crandon Park Public Clay and Grass Court Committee said it has collected about 500 signatures from Key Biscayne and Miami-Dade residents on a petition opposing the elimination of soft-surface courts at the tennis center. The petitioners have said the soft-surface courts are needed by older players because they are easier on their legs and joints.

The promoters have leased the tennis center from the county to hold the tournament there each year since the 1980s.

Last year, county commissioners placed the tennis center project on the November ballot at the request of the promoters. In pushing for last year’s referendum, the promoters said the facilities there need to be updated and improved to keep the Sony Open, one of the premier events in pro tennis.

Also, the promoters have maintained their proposal to fund the project with county bonds would not involve any public monies because the bonds would be backed by the tournament’s revenues – another point that Mr. Matheson has contested.

Furthermore, the promoters have said the tennis center, once the project is completed, would continue to be open to the public for use when the tournament is not there.