Advertisement
The Newspaper for the Future of Miami
Connect with us:
Front Page » Business & Finance » Security fraud enforcement stepped up 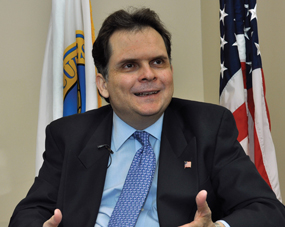 A string of securities fraud cases have come in recent months from the US Securities & Exchange Commission’s Miami Regional Office, including charges brought against a former Miami city official and the operator of county-owned Jackson Memorial Hospital.

Since July, the SEC has announced charges and settlements on at least six cases in South Florida handled by the agency’s regional office on Brickell Avenue in Miami’s financial district.

Nationwide, the SEC – charged with policing the financial industry – filed 734 enforcement actions in fiscal 2012, the second-most ever and just one shy of a record 735 actions filed in fiscal 2011, according to the agency’s last annual financial report, issued in November.

Municipal securities – such as the two local cases mentioned above – have been among the SEC’s areas of increased emphasis, agency officials said.

“Two years after the most significant reorganization in the [SEC Division of Enforcement’s] history, enforcement continues to perform at a remarkably high level, achieving excellent results in an increasingly complex and global securities market,” the report states.

Of the 734 actions in the last fiscal year, 150 were filed in investigations designated as National Priority Cases – about a 30% increase over 2011. In addition, the Division of Enforcement obtained orders for $3.1 billion in penalties, the SEC said.

The agency “continued to utilize the enhanced remedies available under the Dodd-Frank [Wall Street Reform and Consumer Protection] Act to bar numerous individual wrongdoers from working in the securities industry, and obtained other forms of relief that send a strong deterrent message and protect investors, including asset freezes, trading suspensions, and penny stock bars.”

The SEC also made its first whistleblower payout to an individual who provided “high-quality, significant information” that helped stop a multi-million-dollar fraud. “Enforcement is receiving many excellent tips through the Whistleblower Program,” the report reads, “resulting in significant savings in investigative resources and time.”

In addition, the SEC increased reviews of disclosures by companies and investment company portfolios in fiscal 2012 to their highest level in years, according to the annual report. The agency is required to review the disclosures of all eligible companies at least once every three years. The reviews improve information available to investors and may uncover violations of securities laws.

However, in a statement also issued in November, the US Inspector General found several “management and performance challenges” within the SEC:

-Information security continues to be a challenge, finding that, among other concerns, many SEC computer servers did not log auditable events because their logging capacity had been exceeded.

-The agency’s Continuity of Operations Plan needed improvements. Such plans are required to ensure a federal agency can continue to perform critical functions during an emergency.

-Deficiencies in the agency’s administration of a personal services contract.

In a response, then-SEC Chairwoman Mary Schapiro said the agency is “deeply committed” to correcting the deficiencies and has made progress on a number of issues.

Meanwhile, the SEC has continued to focus on the municipal securities market. Areas of focus include conflicts of interest, “pay-to-play” schemes, and collusion by individuals and firms involved in state and local bond underwriting and other aspects of municipal financing.

In July, for example, the SEC charged the City of Miami and its former budget director, Michael Boudreaux, with securities fraud in connection with several municipal bond offerings and other disclosures made to investors around 2007 to 2009.

Prior to the alleged violations, the city had a 2003 SEC cease-and-desist order against it for similar misconduct. It was the first time a municipality was charged with further wrongdoing while still being subject to a prior decease-and-desist order, prompting SEC Miami Director Eric Bustillo to say that “Miami cannot continue to play shell games with its finances.”

And in September, the SEC charged Public Health Trust, the operator of the county-owned Jackson Memorial Hospital in Miami, with misleading investors about the extent of its deteriorating financial condition prior to an $83 million bond offering in 2009. The Public Health Trust agreed to settle the charges.

The organization “fell short in its obligation to maintain adequate accounting systems and controls that ensure truthful disclosures to investors about its financial condition,” Mr. Bustillo said. “Public Health Trust used stale numbers to calculate its revenue figures and lacked any reasonable basis for projecting losses that were far less than reality.”

-In September, the SEC announced that a Tamarac woman, Jenny E. Coplan, was charged with defrauding investors in an alleged Ponzi scheme and affinity fraud that targeted the local Colombian-American community and involved purported investments in immigration bail bonds.

-In September, the SEC announced charges against TD Bank and a former executive, Regional Vice President Frank A. Spinosa, in connection with a massive South Florida-based Ponzi scheme conducted by Scott Rothstein, now serving a 50-year prison sentence. TD Bank agreed to settle the case and pay $15 million, while the SEC has filed a complaint against Mr. Spinosa in federal court.

-Also in September, the SEC charged and froze the assets of a Miami-based lawyer, Bernard H. Butts Jr., and other alleged perpetrators of a prime bank investment scheme that promised exorbitant returns from a purported international trading program.