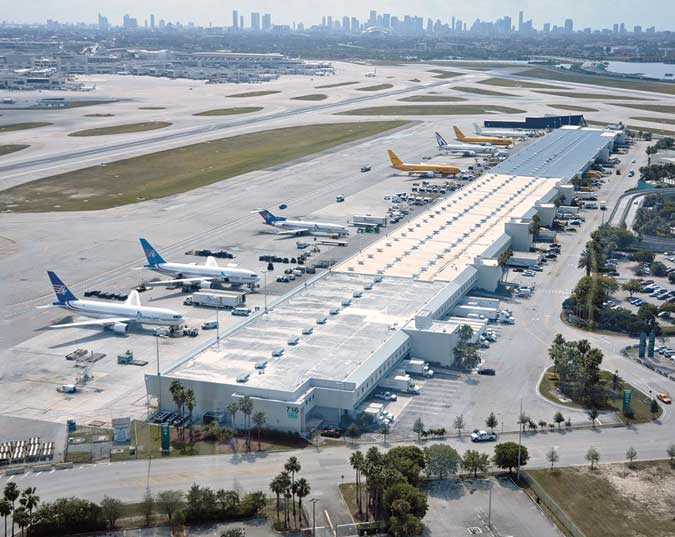 The statistics were released by the Florida Foreign Trade Association Monday. “While we see an increase of 17.14% in number of flights, 9.84% increased in deplaned  tonnage, 18.99% in enplaned tonnage and a 12.4% increase in total tonnage, we should also take a look behind these figures,” says the report, “By taking the number of flights operated during this eight-month period and comparing it to the number of flights in the same period in 2012, we find that the average load per flight has dropped by 60.3% in deplaned, increased by 5.78% in emplaned and dropped 4.3% in total load.”

The airport also has other airports that it’s competing with, said Joseph Smith, vice president of the Florida Foreign Trade Association. Such potential competitors are Pittsburgh International Airport, which received $45.3 million from Consul Energy to drill shale gas on 9,000 acres of land owned by the airport, according to the report.

“The [Pittsburgh] airport will also receive 16% on production and funds will be used to expand the airport for both domestic and international operations,” the report states.

A second potential competitor that the Florida Foreign Trade Association foresees is Huntsville International Airport in Alabama. “It has reopened its expanded west runway and taxiway and has received FAA certification for Group VI aircraft. Huntsville is Panalpina’s hub for flights from Asia to Mexico and points south, as well as from Mexico and points south of Europe,” the association states.

The third competitor would be Ellington Airport in Houston, according to the report. “It’s being developed right now,” Mr. Smith said. “It used to be an Air Force Base and it’s being turned into an all-cargo airport.”

The report states that in an all-freighter airport, cargo aircraft can land and take off without waiting in line behind passenger aircraft.

Is geographic location also an issue? “In Houston you’re closer to the center of the US and you can go up to Chicago. If you look at trade statistics for Houston, they’re number one in exports and number two in imports, with airport and port combined,” Mr. Smith said.

Miami serves more countries in Latin America, he said, but Houston has been moving more cargo.

The report also says that Miami International’s total growth for this year is 0.008%, which is 0.508% above the current worldwide figure.

“We are not being critical of the operations at MIA. We have to face the fact that MIA is faced with strong competition from other US airports: new longer range and wide-bodied aircraft have caused airlines to change their routes in order to meet growing market demands,” the report states, “MIA has to fight for every new carrier it can get and requires additional staffing in its Marketing Division to accomplish this goal.”

Miami International Airport did not provide comment by deadline.