Advertisement
The Newspaper for the Future of Miami
Connect with us:
Front Page » Communities » Sony Open expansion tangles in courts 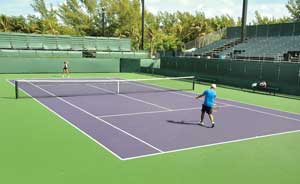 First it was Bruce Matheson. Now it’s local tennis players and others who are at odds with promoters of the annual Sony Open pro tennis tournament on Key Biscayne.

A group named The Save Crandon Park Public Clay and Grass Court Committee says it has collected about 500 signatures from Key Biscayne and Miami-Dade residents on an online petition opposing elimination of soft-surface courts at the county-owned Crandon Tennis Center.

Promoters of the Sony Open want to eliminate clay and grass courts at the tennis center as part of the planned reconstruction to enhance the center for the tournament.

Already, the promoters – International Players Championship Inc. – are contending with a lawsuit to stop the project by Mr. Matheson, whose family donated land to the county some 70 years ago that became Crandon Park. He has filed a motion for summary judgment that is scheduled for a hearing Oct. 17 in Miami-Dade Circuit Court.

According to the Save Crandon Park Committee, the promoters propose to build three more permanent grandstands/stadiums at the tennis center and eliminate six clay courts and two grass courts, leaving only hard-surface courts. The proposal has been tentatively scheduled to be heard by county commissioners Oct. 22, the committee said.

“Miami-Dade and Key Biscayne residents use the soft surface tennis courts 350 days a year,” a committee statement reads. “The clay courts are usually booked at prime time… and monumental changes are being made to serve only a 12-day-a-year tennis tournament with no input from the public and year-round users of the facility.

“Most adult tennis players, 40 years and older, play only on clay courts because the hard surface courts are bad for the joints/more injuries, and this would adversely impact the senior players,” it continues. “There are not enough public soft surface tennis [courts] available on Key Biscayne or Miami-Dade County, but hard surface courts are plentiful.”

The promoters, who lease the tennis center from the county, note that the project was approved by more than the required two-thirds majority by Miami-Dade voters last November – although Mr. Matheson’s suit is contesting the measure, saying it was vague and misleading.

Eugene Stearns, a lawyer for the promoters, said: “It is correct that the voters overwhelming approved planned improvements to the tennis center to, among other things, construct three new permanent facilities for spectators to watch tennis, the seating capacity of which will be no greater than the temporary facilities used every year for the tournament.

“It is true that the plan includes the elimination of the two grass courts and the six clay courts now on the site,” Mr. Stearns added. “It is not true that this removal is required by the three permanent seating areas. It is required to have sufficient hard courts to maintain the tournament, provide the green space promised the public, and provide and operate, year-round, a world-class public tennis facility.”

Mr. Stearns said the clay courts at the tennis center are not used as much as the hard surface courts there.

“We believe the use of the clay courts is overstated by their advocates,” he said. “During the county budget year 2011-12, the public hard court usage at the tennis center was 20,221 hours, clay court was 3,403 [hours], and grass courts received only 50 hours of use.

“Most importantly,” he added, “there are currently nine clay courts located immediately north of the tennis center on the county-owned Crandon Park Golf Course… While we understand that the proponents of the clay courts simply don’t want to go next door – within the same county park – that understandable desire cannot trump the overriding public interest involved in this issue.”

The Save Crandon Park Committee, meanwhile, has sided with Mr. Matheson’s position that the ballot measure that approved the project was not clear.

“Miami-Dade voters approved Crandon Park Tennis Center expansion/upgrades… if paid by revenues from the tournament and not public money,” the committee said. “The voters never approved eliminating clay and grass courts. The details of the plan were not revealed to the voters, and most of the people that have signed the petition who also voted for the expansion said they would have never voted for it if they knew the clay courts were going to be eliminated.”

Mr. Stearns has noted that the promoters have called for the project to be funded by the sale of county bonds that would be solely backed by tournament revenues, thus equating to no use of public dollars.

Still, Mr. Matheson’s contention – and one shared by the committee – has been that voters were duped into approving changes at the tennis center in a project that will primarily benefit commercial interests tied to the Sony Open, which began there in the 1980s and has developed into a premier pro tennis event.

“It is a public park donated by the Matheson family for ‘public park use only’ and it should not be commercialized and changed for a 12-day tennis tournament,” the committee said. “This is the only multi-surface public court facility in South Florida with clay, grass and hard courts.”

Mr. Stearns took issue with claims that the tournament would be the only beneficiary of the tennis center project.

“The suggestion that this is commercialism in a public park is simply political rhetoric,” he said. “The tournament brings the public into a public park for a brief period every year. Indeed, the magnitude of the public’s enjoyment of Key Biscayne is measured by the huge economic benefit to this community every single year.”