Advertisement
The Newspaper for the Future of Miami
Connect with us:
Front Page » Arts & Culture » Cuban museum at American Airlines Arena? 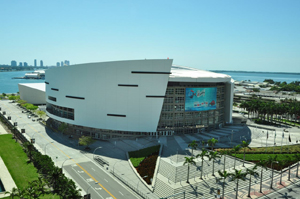 The measure still requires action by the full county commission and is to be discussed Nov. 5.

“I’ve had some of my constituents come to me, since this falls in my district, and in the discussion for the public support regarding Parcel B they want it to remain green space,” said Commissioner Audrey Edmonson, “so what I’m doing is directing the mayor to conduct a study to see if there are any parcels, other parcels, in that particular area.”

Several discussions have been held for many years regarding the Cuban museum concept. The last study, conducted in 2008, was aimed at the possibility of a Bay of Pigs Museum and Library on the vacant Parcel B.

The county owns the arena, the Heat Group controls it and it is under the City of Miami’s zoning regulations. The 2008 conceptual study stated that the property was subject to city zoning ordinances and that the current zoning for the site was for parks, recreation and open space.

The resolution that was discussed at the Finance Committee on Tuesday stated that “in the intervening years since the 2008 conceptual study, many of the project’s original proponents have gradually evolved its scope and content, in a series of substantive, detailed and prolonged discussions with Miami-Dade County and other officials, to a much broader, more inclusive and sustainable Cuban Exile History Museum… rather than the prior narrower predecessor concept focused primarily on the Bay of Pigs.”

Commissioner Dennis Moss agreed with Ms. Edmonson’s idea of looking at other options.

“I’m glad you did that, because if we’re going to do this I think we should look at many different opportunities,” he said, “We have Museum Park, and it seems to me like the more folks and museums you can get into that particular area… it at least needs to be explored.”