Advertisement
The Newspaper for the Future of Miami
Connect with us:
Front Page » Business & Finance » Buyers chase Brickell, downtown condos 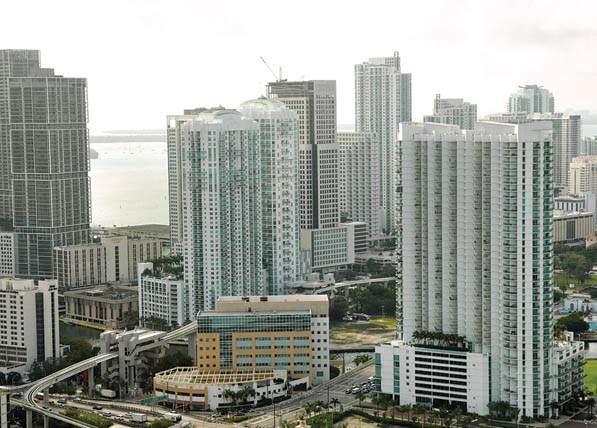 Downtown Miami and Brickell’s condo resale sector is “hot,” top brokers say, with demand far outpacing supply and buyers already having scooped up the tens of thousands of units that came to market just as the industry crashed about six years ago.

“There’s no question the market is healthy and strong,” said Mike Pappas, president and CEO of The Keyes Co. “It’s hot, and it’s very exciting to see this recovery.”

Developers built about 20,000 units in downtown and Brickell in the past decade. And as luck would have it, it seemed their timing couldn’t have been worse. They finished about 70% of these condominiums near the industry’s low point between 2007 and 2009. And they would have been saddled with that inventory were it not for foreign investors.

“Everybody thought these units weren’t going to be eaten up, but they’ve all been bought, except for a few hundred, thanks to our South and Central American friends who saw bargains and snatched them up,” Mr. Pappas said. “So now we’re seeing real price appreciation that bodes well for the future.”

“Kudos to our great skyline,” he said. “Miami is the only urban city created after [World War II]. We’ve done what everybody wants – urban infill.”

Philip J. Spiegelman, whose company ISG World analyzed 10 years of construction absorption in the Miami area, found a market with “a reasonable amount of equilibrium and more demand than supply.”

“It’s hot. It’s on fire,” he said. “The resale market is exceptionally tight. It’s as tight as can be. People are not listing their units. They’re sitting back and asking what they’re going to get.”

Two key factors, the experts said, are driving the industry: limited supply and the increase in prices that result from this scarcity.

“Now, what we’re hearing from brokers is they can’t get listings,” said Mr. Spiegelman, who markets luxury condominiums. “People won’t list. Everything that’s been built from 2008 has been bought up. Demand exceeds supply at this point.”

And when condos do become available, he said, they sell quickly.

A typical listing lasts on the market 30 to 45 days, as opposed to about two years ago when it took at least 120 days to sell a unit in major markets and longer in suburban sectors.

Prices are up too on condo resales, said Miguel Correa, district sales manager for Keyes.

In 2010 the industry started to rebound and the trend has continued. So far this year condo sales are 13% higher than the same period last year and prices improved 19%.

“Prices are up but the volume is there, so I don’t think we can see any effect of the new construction affecting sales,” Mr. Correa said. “We cannot tell how this is going to pan out. It’s still too early to tell. That’s the main thing. Only time will tell.”

Meanwhile, time has been good to the older units – even those built prior to 2000, because their prices have also appreciated, he said.

And industry watchers say as the older market collapsed, so too did the weakest players. The last cycle saw developers borrow large sums without the collateral or track record to prove they could complete major projects, Mr. Spiegelman said.

“Only the strong should survive in this marketplace,” he said. “Developers without a track record won’t find the public to give them deposits, which should serve to maintain the equilibrium.”

Major developers, such as PMG and The Related Group, inspire investor confidence and boost sales.

“What they start they will finish,” Mr. Spiegelman said, “and that’s what the market is responding to.”