Advertisement
The Newspaper for the Future of Miami
Connect with us:
Front Page » Healthcare » Jackson bonds: $1.4 billion cost to repay 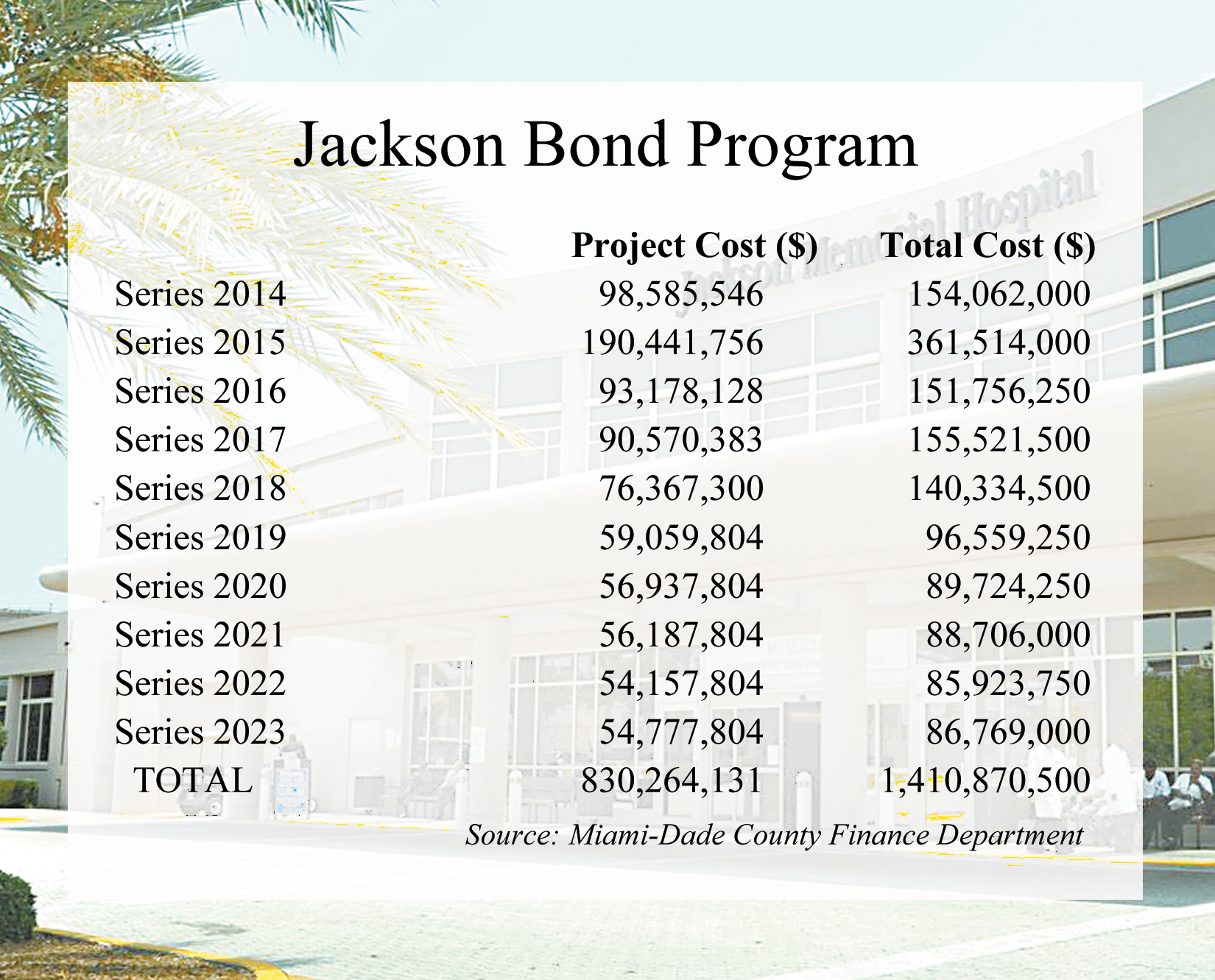 If voters approve a proposal for $830 million in public funding for Jackson Health System, the total cost is likely to be around $1.41 billion.

It would mean the county would increase property taxes and issue a series of bonds every year for the next decade, beginning in 2014.

By staggering issuance, the county would pay investors interest on smaller principal each year rather than on the $830 million, as it would be expensive to borrow the lump sum early, Mr. Hinton said.

With the serial bonds, the first year’s principal plus interest costs are likely to be around $154.06 million, based on a conservative interest rate estimate of 6%, plus legal, underwriting and other costs associated with the issue.

The county would also spread out payments by repaying the principal annually to investors and the interest every six months as a means of keeping more money in its coffers to finance the projects, analysts said.

“What they’re trying to do is take it one step at a time,” said Dr. Jay H. Abrams, chief municipal credit analyst at FMS Bonds Inc. “It’s a conservative approach. Each year they’ll judge how the hospital progresses, which makes sense.”

For now, though, the borrowing’s fate rests in the hands of voters, who would decide in November whether to approve Jackson Health System’s request for $830 million to fund construction, renovation and purchase updated equipment. The 10-year bond program would allow the county-owned hospital to upgrade operating rooms and emergency departments; renovate nearly every inpatient unit at Jackson Memorial Hospital, Jackson North Medical Center and Jackson South Community Hospital; spend $300 million for new medical equipment and other technologies; and revamp its elevators, air handlers and other infrastructure systems.

The hospital has created a political committee, Citizens for a Healthy Miami Dade, to rally public support and raise more than $1 million for a marketing campaign asking voters to approve the borrowing.

If Jackson succeeds, the general obligation bond it secures would give it access to capital it would otherwise be unable to raise.

“Jackson serves an essential purpose, but it’s not in a strong financial position. It’s a teaching hospital, which is hard to do, and it’s a hospital of last resort, serving people without insurance…,” Mr. Abrams said. “Issuing this as a general obligation bond would save money on interest, because it pledges the full faith of the county and the county’s credit rating.”

The county’s Aa2 bond rating – an indication of its low credit risk – would come in handy for Jackson, which has suffered annual losses of $80 million to $90 million but is on track to record a surplus of $35 million this year, according to information from CEO Carlos Migoya.

But the hospital’s funding request has met opposition from Commissioner Juan Zapata, who said Jackson should be looking to cooperate with other health systems rather than gearing to compete with them. Instead of building up to a dozen urgent care centers, for example, he suggests the hospital partner with another health system on the project.

“It’s a billion-dollar bet we’re making that Jackson will be able to compete,” he said.  “It’s tough competition and it’s a big bet. What happens if it doesn’t work? We just created an even bigger system that the taxpayers are going to have to maintain.”

Plus, he said, the two largest employers – county government and the school board – have failed to design their healthcare plans to offer incentives that encourage their staff to use the hospital.

It’s too soon to predict how property taxes would increase if the proposal to borrow $830 million passed, Mr. Hinton said. By early October, county staff would make projections about anticipated interest rates in order to determine the necessary tax rate increase.