Advertisement
The Newspaper for the Future of Miami
Connect with us:
Front Page » Business & Finance » FPL pushes ahead with new nuclear reactors 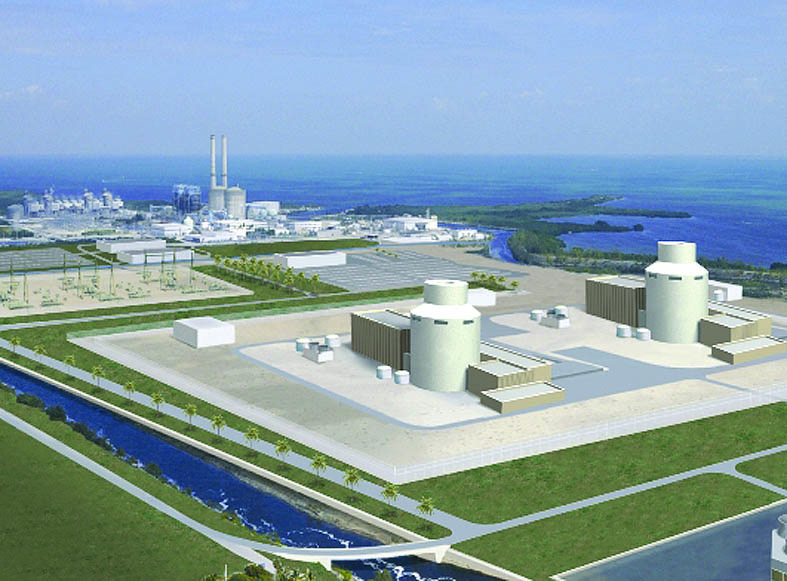 Florida Power & Light Co. this week said it will push ahead with plans to build two additional reactors at its Turkey Point nuclear plant south of Miami as energy industry watchdogs question the financials and demand for such projects.

FPL, Florida’s largest electricity company, told Miami Today that it expected to receive federal and state licensing and approval for the Turkey Point expansion next year and the new reactors would start operating in 2022 and 2023.

FPL would finance the project, estimated to cost $12 billion to $18 billion, and start charging customers to make up the construction costs once the reactors went into service, said Peter Robbins, lead advisor of nuclear communications for NextEra Energy Inc., FPL’s parent company.

By the end of this year, the company will have collected about $211 million from its customers to pay for the regulatory application and planning process, Mr. Robbins said.

In the long run, he said, the Turkey Point expansion will be a big cost saver for customers, saving FPL an estimated $78 billion in fuel purchasing costs over a 40-year period if the company were to buy natural gas – the next most cost effective alternative – to produce the additional energy that the new reactors would generate.

By law, utility companies are not allowed to profit from fuel purchases. “A $78 billion [fuel] savings for us means $78 billion in savings for our customers” spread out over a number of years, Mr. Robbins said.

“We’re taking a careful approach to the Turkey Point [expansion],” he added, “pursuing both state and federal approvals in a deliberate, step-by-step manner.

“Nuclear cost recovery funds are used in a pay-as-you-go approach to get the licenses and approvals – a fiscally responsible approach that actually saves customers money,” he added.

By the end of this year, FPL expects to have recovered $662 million of those costs from its customers through their monthly electric bills. The company, which provides electricity to about 4.6 million homes and businesses in Florida, would continue to charge customers for the renovations in coming years until the cost was recovered.

Now that the renovations at Turkey Point and St. Lucie have been completed, the average cost to customers is expected to drop by more than 70% next year to 46 cents a month, down from $1.65 a month this year, according to Mr. Robbins.

“That means that for all of 2014, our average customer is paying less than the cost of two gallons of gas for a project” expected to save them billions of dollars, he said.

He said the added energy produced from the refurbishments of the existing Turkey Point and St. Lucie reactors will eventually save customers an estimated $3.4 billion if the company were to purchase fossil fuels to generate that power.

Also, he said the renovations at both plants are producing an additional 500 megawatts of energy – about 25% more than originally projected.

However, the Florida Office of the Public Counsel, which advocates for consumers in utility matters before state regulators, has taken issue with the Turkey Point renovations. The office said the cost of the project has skyrocketed from an original projected $750 million to $2.2 billion or more.

As a result, the Public Counsel’s office said it will ask the Florida Public Service Commission, which regulates utilities, to disallow FPL from recovering $200 million from customers related to the Turkey Point renovations.

The state “should disallow $200 million of the $975 million that FPL spent on Turkey Point in 2012 alone,” the Public Counsel’s office said.

Public Counsel J.R. Kelly said his office has “serious concerns” about the high cost of the Turkey Point refurbishments, arguing that FPL didn’t properly plan for uncertainties that ended up dramatically inflating the project’s costs.

FPL, the Public Counsel and other interested parties were expected to file briefs on the matter this week before the Public Service Commission, which is expected to issue a decision in the fall.

Mr. Kelly said his office also has reviewed the early regulatory costs that FPL has put out for its Turkey Point expansion and, so far, has not found anything that is “objectionable.”

He said overruns were mainly due to two factors: additional engineering costs, and extra expenses related to heightened safety requirements for all such projects by the federal Nuclear Regulatory Commission in the aftermath of the 2011 disaster at the Fukushima nuclear plant in Japan.

“These are incredibly complex uprates,” Mr. Robbins said about the Turkey Point and St. Lucie renovations.

The Fukushima incident involved equipment failures, nuclear meltdowns and the release of radioactive material following an earthquake and tsunami. It has been called the second-worst nuclear disaster, behind only the Chernobyl catastrophe in Ukraine in 1986.

Meanwhile, several energy companies have been scaling back their own nuclear plans in the US, according to the Vermont Law School’s Institute for Energy and the Environment, which is concerned with energy law and policy with the goal of reducing greenhouse gas emissions.

Mark Cooper, the institute’s senior fellow, is forecasting that three dozen reactors are at risk of early retirement, citing Duke Energy’s recent announcement that it is dropping its proposed nuclear reactor project in Central Florida.

“The announcement by Duke that it is abandoning the Levy reactor project in Florida is the second such announcement by that utility in the space of just a few weeks,” Mr. Cooper said.

“The Duke decision to pull the plug on Levy follows by just one day [the news] that the French-subsidized nuclear giant EDF is pulling out of the US nuclear power market due to the inability of nuclear power to compete with alternatives and the dramatic reduction in demand growth caused by increasing efficiency of electricity-consuming devices,” he said.

Mr. Cooper said Exelon, a company with the largest US nuclear fleet, recently bought the nuclear assets of Constellation [Energy] in an effort to achieve synergies and lower the operating costs of its nuclear assets. And he said Entergy, the second-largest nuclear operator, has reorganized its nuclear assets and is slashing staffing.

“In recent months,” he added, “we have seen the shutdown of four reactors – San Onofre [two reactors] in California, Kewaunee in Wisconsin and Crystal River in Florida – and the death of five large planned ‘uprate’ expansion projects – Prairie Island in Minnesota, LaSalle [two reactors] in Illinois and Limerick [two reactors] in Pennsylvania.”

Mr. Cooper said Florida provides a pointed example of the “dismal state of nuclear economics,” with more than $3 billion “wasted” by Progress Energy for the Crystal River uprate and the Levy new build, and hundreds of millions in “exorbitant nuclear uprates” by FPL on the Turkey Point and St. Lucie projects.

FPL, meanwhile, maintains that its investments in nuclear power are worthwhile.

Mr. Robbins wouldn’t comment on decisions by other utility companies to drop or scale down their nuclear operations, but said FPL’s nuclear investments are already starting to pay off as “our customers are getting clean, reliable energy that doesn’t have any greenhouse gases.”