Advertisement
The Newspaper for the Future of Miami
Connect with us:
Front Page » Top Stories » Bridge being repaired and then replaced

Bridge being repaired and then replaced 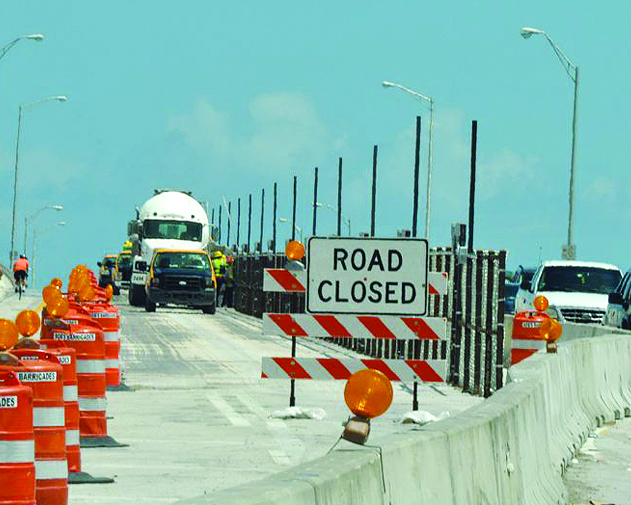 A study of pilings below the seabed supporting the Bear Cut Bridge leading to Key Biscayne shows a life expectancy far shorter than previously projected, meaning that as Miami-Dade County is repairing the bridge it must start now to plan for a new bridge to replace it.

Two of eight pilings evaluated by Kiewit Infrastructure South Co. for the county’s Public Works and Waste Management Department don’t meet the safety factor of 2 at their shortest lengths, based on one of the two methodologies used for the inspection.

“However, we don’t see any other issues with the piles,” Mr. Cotarelo said.

The repair project currently underway on the original bridge and the West Bridge to its east, both built in 1944 and widened during the 1980s, started in July and is targeted for completion next April, Kathleen Woods-Richardson, county director of the Public Works and Waste Management, told the committee.

“We’re replacing the superstructure. What has changed is that we said the bridge had a 30- to 40-year life expectancy and now we estimate 20 to 30 years, so long as we don’t add additional load on the pilings,” Mr. Cotarelo said.

“The village stepped away. We hired a consultant to review the report,” Mr. Gilbert replied.

They said that the county engineers and the village had a meeting scheduled later in the day to review the evaluation results.

Commissioner Juan C. Zapata said that 25% of the piles inspected didn’t meet the safety factor, which would be questionable.

“It is fine,” Mr. Cotarelo said. “We feel like nothing else is showing that there’s a deficiency. We do not see anything of these piles, cracks, anything that would indicate any issues.”

To commissioners’ concerns that the eight piles only constitute about 2% of total piles, Mr. Cotarelo said they are a representative sample, because the evaluation is a very expensive methodology, and that inspectors have been conservative when looking at the lower end of the piles.

Commissioner Zapata had stated concerns in the past over the county spending $31 million on bridge repairs only to discover that the bridges wouldn’t last long enough.

Mr. Cotarelo said that from its planning to the end of construction, building a new Bear Cut Bridge would take 10 years.

“As soon as we are done now, we’ll start the process of total replacement,” Mr. Cotarelo said. “It would cost $70 million in construction alone in today’s dollars for a bridge of the same height. We are therefore planning to start seeking funds to develop the new bridge.”