Advertisement
The Newspaper for the Future of Miami
Connect with us:
Front Page » Business & Finance » Telemundo launches $10 million studio 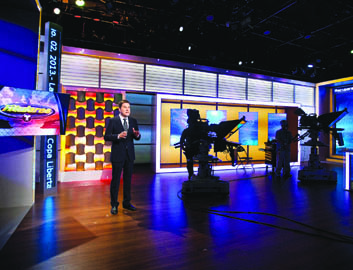 In its run-up to the 2015 opening of the FIFA World Cup Soccer series, NBCUniversal’s Telemundo Media last week launched a new $10 million studio for its sports channel, Deportes Telemundo, that appears to put actors and viewers in the throes of the action.

In October 2011, Telemundo Media acquired the exclusive Spanish-language US media rights to the FIFA World Cup across all platforms (except radio) from 2015 through 2022.

The new studio – part of a massive assemblage of buildings that comprises the network’s Hialeah headquarters – incorporates a 30-foot video wall, an interactive touchscreen and a 300-fixture LED lighting grid that will reduce energy consumption by 75% even as it allows technicians to create almost any desired lighting effect.

The front of the anchors’ desk can be customized to digitally reflect an image that relates to the subject or person being covered.

“This studio was conceived in Hialeah, built in Hialeah, delivered in Hialeah and will operate in Hialeah,” quipped Jorge Hidalgo, Telemundo’s executive vice president, to a group of touring journalists and Telemundo employees.

“This is a landmark moment for Deportes Telemundo, as we prepare to launch what will be our home for years to come,” Mr. Hidalgo said in a statement. “We’ve designed and built a spectacular looking set that is modern, versatile and smart.”

The studio is the venue for some of the sports network’s most popular shows, including “Titulares Telemundo,” “Titulares y Mas,” “Futbol Estelar” and “Rumbo al Mundial.”

“We’re continuing to ramp up our resources in the 1½ years before the World Cup,” Mr. Hidalgo said. Competition to acquire the soccer rights was fierce, he said, but “being part of Comcast made all the difference.” Comcast is the parent of NBCUniversal. “Comcast knows value, and they weren’t shy about going after it.”

Not only is the new studio more versatile and more visually appealing, but it is also part of Telemundo’s overall strategy to leverage technology as quickly as it appears on the horizon. “We don’t consume television the way we did 10 years ago, or even five years ago. Technology didn’t play nearly as big a role as it does today,” Mr. Hidalgo said.

Viewers want content delivered on their phones, and to their tablets or other mobile devices. They also want to be able to interact with content providers and, to some degree, to influence coverage through social media.

“Hispanics are very active on the digital scene, and sports is a big avenue,” said Alfredo Richard, senior vice president of communications and talent strategy for Telemundo Media. “Nowadays, they want to view the game and to be part of the game.” Fans have even become vocal about what players they like and want to know more about, he said.

“Facebook and Twitter have become very big,” Mr. Hidalgo agreed. “Your viewer is telling you exactly what you’re doing right and what you’re doing wrong, and you’d better listen. You’ve got to be in touch with your viewer, and we are.”

Telemundo’s multiple platforms include the Telemundo Network, a Spanish-language television network featuring original productions theatrical motion pictures, news and sports events (of which Deportes Telemundo is a part); mun2, the preeminent voice for bicultural Hispanics in the US; Telemundo Digital Media, which distributes Telemundo’s content across digital and emerging platforms including mobile devices; and Telemundo Internacional, the international distribution arm that has positioned Telemundo as the second-largest provider of Spanish-language content worldwide, syndicating content to more than 100 countries in over 35 languages.