Advertisement
The Newspaper for the Future of Miami
Connect with us:
Front Page » Real Estate » Investors bidding up multi-family units 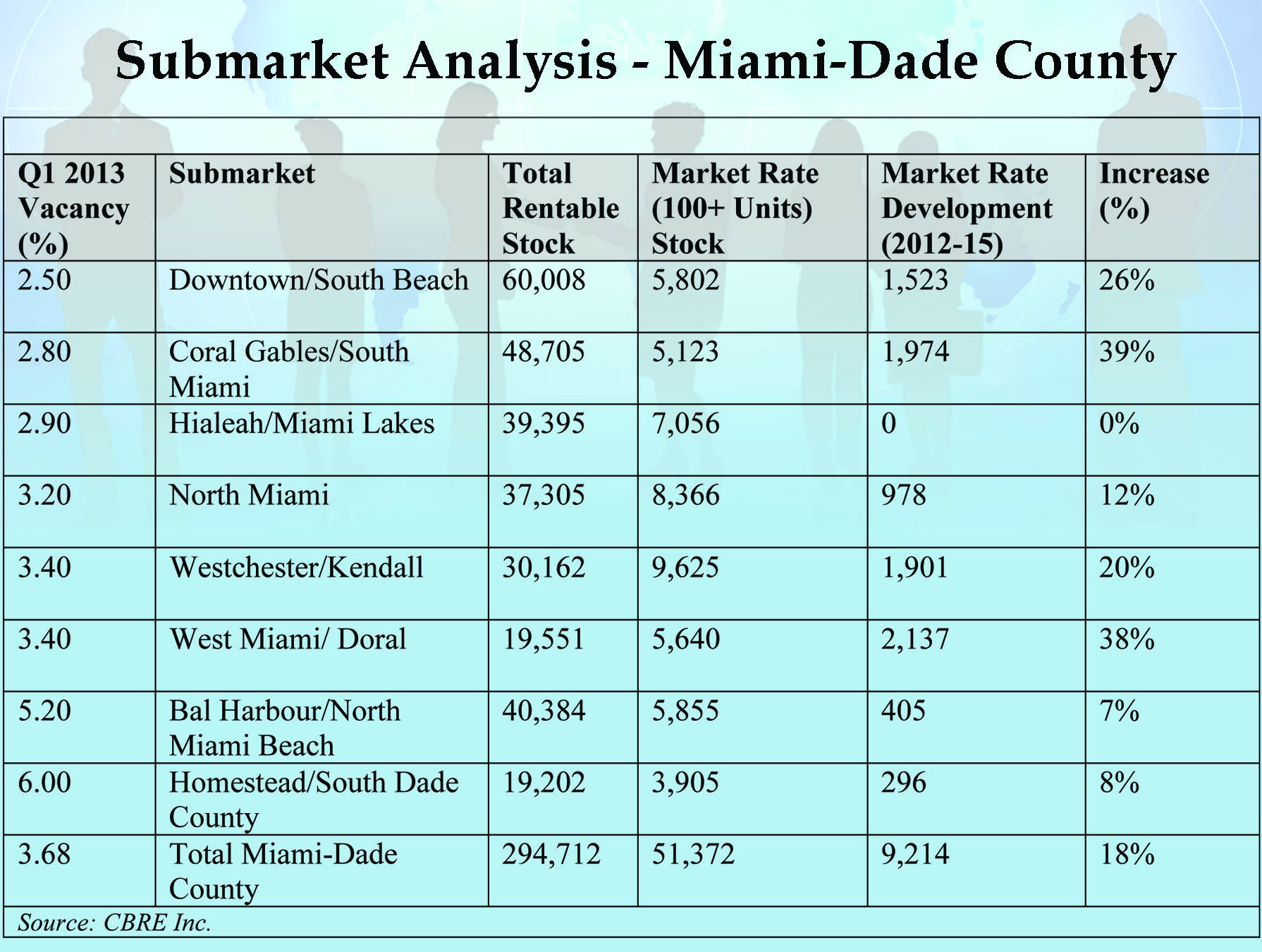 Last year, Jose M. Serrano sold a six-unit apartment building in Little Havana for $450,000. It was 40% complete  abandoned when the market crashed  which meant the new owners would have to invest about $500,000 more before taking in their first tenant.

But the property attracted multiple potential buyers, each interested in a piece of the multi-family sector, where industry sources say prices are at a premium, thanks to scarcity and high demand.

“All the vacancies we had in this sector are gone, and when that happens rental prices start to go up,” said Mr. Serrano, a specialist in multi-family properties and a member of the Realtors Commercial Alliance of the Miami Association of Realtors’ board of directors.

Only about 3.5% of the nearly 295,000 multi-family units in Miami-Dade are empty, according to association data. And the numbers suggest the inventory will remain limited. In 2010, for instance, the vacancy rate was 6%, but two years later it dropped even more to 4.9%.

That’s why investors at both ends of the spectrum are paying attention to multi-family units, offering top dollar for buildings with four or more units.

“We don’t see renters as second-class citizens,” said Diego Ojeda, vice president of the Rilea Group, speaking to about 500 industry professionals at the South Florida Developer Showcase this month. He said his company, whose properties include One Broadway at Brickell, is developing projects with the knowledge the units could be rented at premium rates.

“People are paying a lot of rent for these properties,” Mr. Ojeda said, so developers are building to offer amenities attractive to the rental market.

And some are gearing to get the highest returns on their money.

“They’re looking to build in areas where rents can be the highest attainable, because the cost of construction is so high,” said Robert Given, vice chairman of CBRE Inc., working in the South Florida multi-housing group.

In Kendall, The Altman Companies’ 321-unit garden apartment development features lake views, an outdoor activities pavilion with sports bar and demonstration kitchen, cabanas overlooking the lake, and an organic vegetable garden for residents to grow their own plots. Mill Creek is also in that submarket, with Modera Dadeland, a 350-unit class-A apartment community in two mid-rise buildings.

“There aren’t a lot of opportunities for investment for institutional-class properties with 100 or more units, so a lot of investors are coming in and developing their own,” Mr. Given said.

Typically backed by large life insurance companies or other partners, these developers are creating inventory, looking to build for a 6% to 7% return on cost.

CBRE is tracking about 9,200 new units in the development pipeline that will come to market over the next three years, representing a 20% increase in inventory.

“Historically, what has happened is that newer inventory was converted to condominiums back in 2004 through 2006, so we really have a shortage in the apartment market,” Mr. Given said. “What we were left with was a lot of older stuff.

“The inventory that is being built today is going to serve a pent-up demand for renters looking for luxury space,” he said. “As these new projects get open, they will serve the demand from renters who can afford to pay rent out of choice as opposed to out of necessity.”

These new properties are likely to demand rents of about $2 per foot, he said, driving up the value of investment property when the buildings trade.

In Little Haven, for instance, rental rates have spiked about 18% in the past year. And property values have followed, Mr. Serrano said. Older buildings, with apartments from the 1950s, for example, were selling for about $45,000 per unit last year.